The BAP Standards Oversight Committee (SOC) unanimously approved the standards for release to the market in late April, followed by approval from the GAA board of directors. The standards can be viewed here: https://bapcertificationdebug.org/blog/wp-content/uploads/2015/02/BAP-MolluskF-516.pdf

A series of comments were received during the 60-day public comment period, which ended on Feb. 12. Comments were received from respondents that included farmers, producer associations and non-governmental organizations from Australia, Canada, New Zealand and the United States. The comments are available on the GAA website: https://bapcertificationdebug.org/blog/wp-content/uploads/2015/02/BAP-MolluskF-Com.pdf

“This represents a major milestone for the BAP program, which now encompasses virtually all aquaculture production systems for finfish, crustaceans and mollusks. Congratulations are in order for Brian Kingzett and his technical committee for their painstaking efforts in creating a workable standard that can be applied globally to the full diversity of farmed mollusks.” said BAP Standards Coordinator Dan Lee.

The standards were prepared by the BAP mollusk technical committee, which was chaired by Kingzett. Committee members, who represent the global scope of mollusk farming both in terms of geography and species, met last year on Vancouver Island, British Columbia, Canada, in October and in St. Louis, Missouri, USA, in July. The SOC — whose members represent a balance of stakeholders from industry, NGOs and academia — recommended refinements to the standards before approving them for release.

At the end of March, there were 1,165 BAP-certified processing plants, farms, hatcheries and feed mills worldwide. 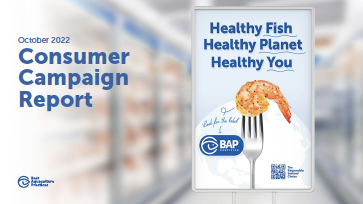