The farm produces more than 8 million pounds (3.63 million kilograms) of steelhead (Oncorhynchus mykiss) annually; the fish are raised in pens. The fish are marketed throughout North America, mostly fresh, to both retail and foodservice customers. 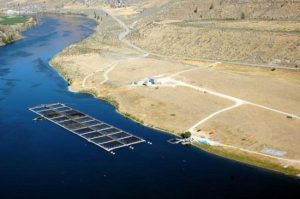 “Our team is extremely proud to receive BAP certification,” said John Bielka, general manager of Pacific Aquaculture. “It demonstrates that we are living out our company vision of providing the healthiest protein on the planet while promoting sustainable practices.”

“This is an exciting development for us in this species and a great step forward,” added Peter Redmond, BAP’s vice president of development. “The GAA is excited to further develop our relationship with Pacific Seafood and welcomes the Colville Nation in to the growing fold of those who strive to grow fantastic quality fish in a responsible manner.”

Based in Clackamas, Ore., family-owned Pacific Seafood is one of the United States’ largest seafood suppliers and distributors. The company processes seafood from Alaska to Mexico and has facilities in seven U.S. Western states.

About BAP
Best Aquaculture Practices is an international certification program based on achievable, science-based and continuously improved performance standards for the entire aquaculture supply chain — farms, hatcheries, processing plants and feed mills — that assure healthful foods produced through environmentally and socially responsible means. BAP certification is based on independent audits that evaluate compliance with the BAP standards developed by the Global Aquaculture Alliance. For more information on BAP, visit http://bap.gaalliance.org.