Four-star BAP status denotes that the processing plants, farms, hatcheries and feed mills from which a group sources are BAP certified. It’s the highest such achievement in the BAP program.

There are now a total of 21 four-star BAP groups, 18 producing shrimp and three producing salmon. 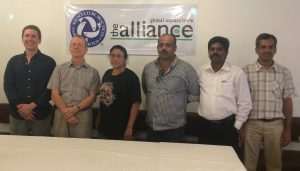 The effort was coordinated by U.S.-based NFS, a division of Pacific Andes International Holdings Limited, which sources shrimp from Penver. In February, NFS and Penver held a joint training seminar to educate farmers on responsible aquaculture practices and the BAP farm standards.

“We are delighted to have achieved certification of India’s first four-star BAP group. We want to thank Avanti Feeds, Penver Products and the BAP staff for their efforts to advance responsible aquaculture in India. This achievement is the result of the cooperation of Philips Thomas, Madhu and our farmers associated with this project in Andhra Pradesh. Together we share a commitment to drive aquaculture improvements in India. We will continue our work to help farmers, small and large alike, to meet the BAP standards, and expect to add significant quantities of four-star BAP shrimp over the next 12 months,” said Jeff Sedacca, president of the shrimp division at NFS.

In addition to the recent certification of a five-farm IOM, NFS and Penver are grouping together small-scale, single-pond farms for certification under the new BAP group program. This program, which is in its pilot phase, will provide family farms with a cost-effective option to participate in the internationally accredited certification scheme.