Assessing the potential of the Brazilian freshwater sardine 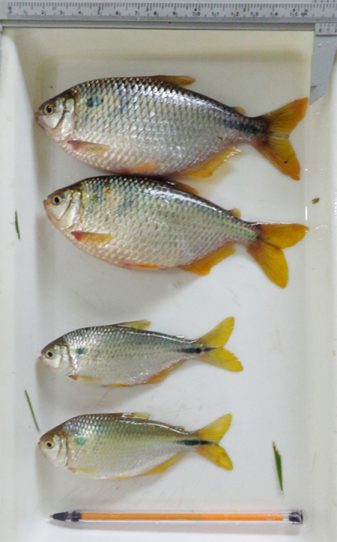 The Brazilian freshwater fish fauna is well known because of its great species biodiversity and the many species with aquaculture potential. Recently, several native species have been studied and cultured, including from the genera Pseudoplathystoma, Hydrolycus, Hypostomus, Salminus, Rhamdia, Brycons, Piaractus, Arapaima, Colossoma, Hoplias, Cichla, Leporinus, Piaractus and Astyanax, among others.

The genus Astyanax is represented by many species with a broad geographic distribution, and their taxonomy can be somewhat confusing. In Brazil, the main species in this genus are A. fasciatus, A. scabripinnis, A. altiparanae and A. bimaculatus. The last one is a relatively small species with a fast cycle life (only 5-6 months from reproduction to harvesting). It readily spawns, accepts artificial diets and also takes advantage of natural production to feed, and its natural schooling behavior favors its culture in intensive systems. These and other characteristics support the potential of the species for aquaculture.

However, to develop the aquaculture of any species its culture procedures (including reproduction, handling, nutrition, health and production management) must be properly researched and developed.

The yellow tail characin (A. bimaculatus) is easily reproduced in captivity, and in subtropical southern Brazil the species will spawn year-round as long as the water temperature is above 19 degrees-C, pH is 6.5 to 8.0, and dissolved oxygen levels are above 3.8 mg/L.

Three approaches can be used to spawn yellow tail characins. In natural reproduction, animals are held in ponds with water exchange. The fish can spawn several times with no synchronization, and will produce offspring of different sizes and ages, which is a disadvantage in aquaculture. In a more controlled, natural reproduction approach, selected adults are transferred to a cage within the pond and are provided with artificial (or natural) substrate located close to the water inlet of the pond.

After larvae schools are detected in the pond, five to 10 days after adults were placed in the cage, the cage is removed and the pond is used as a nursery. This approach reduces the size and age heterogeneity of the offspring because all spawns take place over the same time period. The last approach is an induced one, using the technique of hypophysation (commonly used in other native fish species in Brazil) where fish spawning is stimulated by injecting spawners with lyophilized pituitary extract. This extract contains gonadotropic hormones that induce the maturation of gonads and the production of sex steroids, eventually resulting in reproduction. After treatment, broodstock fish are transferred to natural spawning ponds or tanks, and after the larvae hatch, the adults are removed.

In ponds, the larvae normally begin exogenous feeding 20 to 30 days after spawning, but this time period varies depending on environmental conditions and availability of natural feeds. The larvae are fed diets with 55 percent crude protein (CP) content, which are applied at the edge of the ponds and close to grasses because that is where the young fish concentrate during the first stages of life while looking for shelter. After four to five weeks, with a feeding rate of 7.5 percent of fish biomass/day, the fingerlings will reach 0.5-1.5 grams in size. At this stage, the microscopic protozoan parasitic Trichodina sp.is the main cause for mortalities among the young fish.

Although several authors report the genus Astyanax as being omnivorous and/or herbivorous, the yellow tail characin has a large stomach volume, and has a ratio of intestine length:total fish length that is less than the 1.0 characteristic of carnivorous animals and/or predators. During the nursery, the juvenile yellow tail characins can be stocked at higher densities (over one fish per liter).

After reaching 2 grams in size, yellow tail characins have demonstrated great adaptability to many different rearing systems and can be grown in either extensive or intensive systems, as well as in monoculture and polyculture systems. In intensive monoculture systems, diets between 28-32 percent CP and stocking densities of 350-700 fish/cubic meter have been used. After three months, the fish reach over 12 grams and can be marketed, including as live bait.

The first efforts concentrated on reproduction to determine the reproductive periods, followed by health management studies developing probiotics for use in the culture systems. Current research is looking at improving feed management at different stages of life, and at tolerance to different water salinities.

An experiment was conducted during evaluation of the different stocking densities in the fingerling stages, using 12 aquaria assigned to four density treatments (0.25, 0.75, 2.25 and 6.75 fish/L) in triplicate. The fish were fed ad libitum four times per day with a commercial, 55 percent CP, powdered feed until the animals reached an average weight over 1.5 grams. The fish were then switched to a 1 mm, 45 percent CP commercial diet. After eight weeks of culture, body weight, weekly weight gain, survival, apparent feed efficiency and yield were evaluated.

Survival was not affected by stocking densities, showing the fish’s ability to be grown in intensive systems at almost 7 fish/L. The highest final weight and weekly weight gain were observed in the treatment of 0.75 fish/L, while the smallest fish were produced in the highest density treatment (6.25 fish/L). The treatments with 0.25 and 2.25 fish/L did not differ from the others. The apparent feed efficiency (AFE) was higher in the 6.25 fish/L stocking density; this increase in the AFE at higher stocking densities likely resulted from the increased competition for food, space and oxygen (Table 1). This study concluded that yellow tail characins cultured at a stocking density of 0.75 fish/L (750 fish per cubic meter) showed good growth performance and this density was recommended for growing the species in recirculating conditions.

In addition to this research, a breeding program to enhance the zootechnical performance of the species will be carried out, with additional nutrition research to formulate diets that comply with the nutritional requirements of the species, and also research to evaluate the viability of yellow tail characin culture in super-intensive biofloc system.

The yellow tail characin has great potential for expanded aquaculture production. It is sturdy and easy to handle, facilitating its culture by small producers. It can be marketed as an ornamental fish, as live bait for fishing, as a secondary species in polyculture systems, and for human consumption.

The species can be cultured in estuarine areas because it can tolerate water salinities up to 15 ppt (it can even survive in seawater for approximately 15 min), so it could be used as live bait in the important tuna fishing industry. An area that has much potential for the species is its production in monosex culture through sex reversal with estradiol (feminization), because females grow about 50 percent larger than males. More research is needed to improve and optimize production technologies for this interesting species.