Examining the markets for farmed fish and shrimp in Brazil 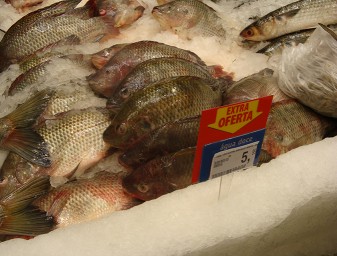 Marine shrimp and tilapia aquaculture in Brazil began with an orientation to exporting their products. In 2003, over 60 percent of the farmed shrimp were sold abroad. The tilapia industry dreamed about exporting fresh fillets to the United States and Europe, and did export some. However, the Brazilian currency (Real) began to recover value against the U.S. dollar in 2005 and the global economic crisis in 2008 affected European and U.S. markets in 2008, forcing aquaculture to shift to domestic marketing. Currently, more than 95 percent of aquaculture production is sold domestically. With 204 million people, Brazil imported 400,000 metric tons (MT) of seafood in 2014 compared to exports of only 34,000 MT, creating for the country a $1.3 billion trade deficit. Chile, China, Vietnam, Argentina and Norway are major seafood suppliers. Capture fisheries declined considerably during the last two decades, as evidenced by the shut-down of many freshwater or marine capture fisheries processing plants year after year. Farmed fish and shrimp products predominate over wild caught seafood at supermarkets in large Brazilian cities.

Therefore, domestic aquaculture and fish imports (mainly aquaculture products, such as the Chilean salmon and the Vietnamese Pangasius) have helped Brazil to supply part of its demand for seafood. Considering 600,000 MT tons of aquaculture products, maybe 500,000 MT of capture fisheries, plus 400,000 MT of imported seafood, average Brazilian seafood consumption is estimated at 7.4 kg per capita/year. The basic structure of the domestic market flow is summarized in Figure 4. Brazil is a large and multicultural country with many market peculiarities. Markets in the southern and southeastern regions generally demand processed products with high added value (i.e. fresh or frozen fish steaks and fillets, for example). In the northern and northeast states, farmed fish and shrimp is mostly sold whole or at the best gutted and headed. However, the demand for steak, fillets and other value-added products is growing rapidly, especially in large metropolitan areas.

Animal production in Brazil consumed 67 million MT of feed in 2014. The Brazilian Union of Animal Feed Manufacturers (SINDIRACOES) estimated a production of 806,000 MT of aquafeed (723,000 MT for fish and 83,000 MT for shrimp). ACQUA IMAGEM identified 70 aquafeed manufacturers and 92 aquafeed mills in the country and accounted for an unofficial aquafeed production over 1.1 million MT in 2014. Aquafeeds, therefore, represent less than 1.6 percent of the total animal feed produced in Brazil. Many aquafeed companies rely on efficient milling and extrusion equipment, qualified technical staff and external expertise, and a reliable supply of feed ingredients, to be capable of producing high quality aquafeeds. In the past 10 years some national feed mills were acquired by international companies.

The main volume of aquafeed produced in Brazil are for the growout of omnivorous fishes (floating pellets from 4 to 10 mm and 28 to 32 percent CP and 4 to 8 percent fat; actual prices from $0.28 to $0.34/kg for 28 percent CP and $0.38 to $0.48/kg for 32 percent CP). Feeds for the growout of marine shrimp are 2-3 mm high density sinking pellets with 30 to 40 percent CP and 5 to 9 percent fat and have actual prices of $0.65 to $0.98/kg). Some feed millers also produce floating pellets for carnivorous fishes, such as the hybrid spotted catfish, rainbow trout, Arapaima and cobia, with 40 to 45 percent CP and 10 to 15 percent fat. Despite the limited supply of fishmeal and fish oils, animal feed manufacturers in Brazil have good quality animal meal, derived from the processing of poultry, pork and beef byproducts. Plant materials, especially corn, sorghum, soybean (whole and meal), wheat bran, cotton seed meal, rice middlings and brans, among others, are also widely available and at very competitive prices. The processing of aquaculture byproducts into fishmeal, fish oil and protein concentrates also contribute to the aquafeed industry and will be an even more important source of nutrients to aquafeed as the sector progresses.

Fish and shrimp farmers listed major constraints preventing the growth of aquaculture in Brazil (Figure 5). Environmental licensing is complex, restrictive, bureaucratic, time consuming and very costly. For this reason, many aquafarms are operating without licenses. Credit is also hard to access and has a complicated bureaucratic process. Banks request high collaterals and the lack of environmental licensing is also a drawback for credit. Farmers complain about the bad organization and lack of government policies to promote the sector and the high production costs (mainly related to feed and labor, as well as production inputs over taxed by government). For shrimp producers, diseases are also a major issue. Water supply and critical low water levels in reservoirs are major concerns among tilapia farmers. Shrimp farmers in the Northeast are also concerned about the supply of low salinity water, as the wells and nearby rivers may not remain viable through 2016 without regular rains.

Challenges and perspectives for aquaculture in Brazil

Brazil will have to deal with an adverse economic and political environment in the next few years. One should expect high value fish products like shrimp, tilapia fillet, Chilean salmon and cod being replaced by more affordable seafood and alternative meats, as consumer keep losing purchasing power due to inflation, unemployment and monetary devaluation. Cost of major production inputs has increased considerably since the second half of 2014, increasing the costs of aquaculture products. On the other hand, the appreciation of the dollar makes imported seafood more expensive. This may allow some room for increasing prices of aquaculture products in domestic markets, which may help producers compensate for part of the increase in production costs.

The appreciation of the U.S. dollar also brings with it good prospects for exporting shrimp and tilapia, as well as cultured Amazonian fishes, such as tambaqui/pacu, pintado (spotted catfish) and arapaima, especially to markets that prize new fish species. However, there are few Brazilian aquaculture enterprises with HACCP certification for exporting to the United States. Aquaculture companies and processors must put forth efforts to obtain export certifications required to reach international markets or maybe form joint ventures with other certified seafood processors in the country. 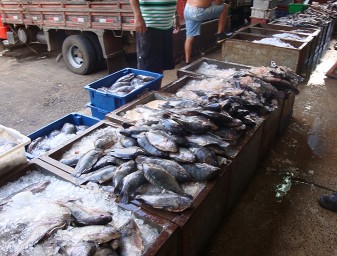 The water crisis in the southeast and northeast Brazil is hindering tilapia aquaculture. From now on, fish farmers in these two regions will live under the uncertainty of the sustainability of their enterprises. Many farmers affected by the lack of water have realized the importance of recovering effluent and waste water discharged from ponds and adjusted production strategies to reuse discharged water. This way will certainly lead to great opportunities for Recirculating Aquaculture Systems (RAS).

Expansion of marine aquaculture is an alternative for the medium and long term to avoid conflicts with the use of freshwater as well as to boost aquaculture production in Brazil. With 8,500 km of coastline, Brazil should be producing much more than the 120,000 MT of farmed shrimp, mollusks, marine finfish and seaweed currently estimated to be the total marine aquaculture production. The government needs to address effective policies and actions to promote the development of marine aquaculture in Brazil, especially by facilitating the access to technologies that have already been developed and applied commercially in Southeast Asia, Chile, Europe and other places.

The government needs to address effective policies and actions to promote the development of marine aquaculture in Brazil, especially by facilitating the access to technologies that have already been developed and applied commercially in Southeast Asia, Chile, Europe and other places.

At the end of 2015, Chinese inspectors approved new Brazilian beef processing plants to export to China. Brazilian animal industries (beef, poultry and pork) are major exporters and depend on fair trade policies. A reciprocal agreement was reach with China’s Ministry of Agriculture that allowed more seafood processing plants in China to export to Brazil in 2016. Aquaculture entrepreneurs should be prepared to compete with farmed tilapia and shrimp coming from China. Ecuador may also jump at this opportunity, placing shrimp and tilapia in the Brazilian marketplace.

With the recent elimination of the Ministry of Fisheries and Aquaculture, the sector needs to stay well organized and represented by Farmer’s Associations such as ABCC (Brazilian Shrimp Farmers Association) and the newly created Fish BR (Brazilian Fish Farmers and Fish Processor Association). These associations can be more effective to intercede with ministries and governmental agencies on issues related to fair trade and inspection of imported aquaculture and fisheries products, risk of disease introduction, taxes and regulations on major production inputs, water use and management in public reservoirs, environmental licensing, animal health, export certification, investments in infrastructure, among others. Farmers associations also need to intensify advertising for domestic aquaculture, not only its products, but also the production practices and concerns about environment and consumer safety. The poultry industry in Brazil has lot of good examples that can be followed by aquaculture sector regarding organization, advertising, marketing, relationship to consumers and quality certifications.

Brazilian aquaculture is currently sailing through troubled waters. Nonetheless, the sector should stay positive, be hopeful and work efficiently to overcome the odds, as we know the economy and politics won’t be this way forever. The aquaculture industry in Brazil grew up to its current size through its own efforts and crossed many hurdles. So, there is no reason it should not survive this storm.