In times when the shrimp-farming industry moves toward integration and increased control – while facing hard times to overcome diseases – postlarvae quality and its long-term effects gain in interest to hatchery operators and grow-out farmers. According to disease experts, the quality of postlarvae is one of the main challenges in countering early mortality syndrome (EMS), a disease that has impacted shrimp harvests in major producing areas over the past several years.

Karunanithi Muthusamy reported in 2013 that once shrimp postlarvae are transferred to growout ponds, changes such as low mineral and dissolved oxygen levels; variations in temperature, pH and salinity; and unpredictable weather can result in the already stressed postlarvae quickly succumbing to infections.

Muthusamy claimed that inferior postlarvae played a part in almost 80 percent of the EMS occurrences in Malaysia. In fact, in other animal husbandry sectors, similar patterns link early nutrition and health care to the robustness and quality of the produced animals, with ripple effects that last beyond the early life stages.

When improving the quality of postlarvae (P.L.), shrimp farmers first need a reliable way to evaluate if the produced postlarvae are of good quality. “P.L. quality” is, however, a term that cannot be accurately measured by one single parameter. Most farmers depend on multipart assessments based on gross inspection, microscopic examination, stress tests and culture history (Table 1).

How can P.L. quality be improved? According to industry reports and scientific literature, the application of optimized hatchery techniques is the most effective way. Such practices not only improve quality, but also increase larviculture performance and reduce P.L. cost.

Besides nauplii quality, which depends on broodstock quality and broodstock feeding, larval nutrition is the most important hatchery factor that influences P.L. quality. It is not a secret that suboptimal larval feeding compromises larval development, survival and growth.

Recent reports, for example, have shown that total artemia replacement during larval stages yields poor growth and affects performance during shrimp nursery culture. Figure 1 shows the capacity for growth during the nursery culture of Litopenaeus vannamei fry that did or did not receive artemia during the hatchery phase.

At the end of the hatchery cycle – the start of the nursery culture – postlarvae that were fed algae, dry diets and artemia nauplii were significantly larger (9 mm) than those fed only on algae and dry diets (7 mm, Fig. 1). Two weeks after the nursery cycle, the difference in length of the juveniles had become relatively bigger, with a 40 percent reduction of growth in the treatment without artemia.

An important lesson to be learned from this trial is that hatchery managers should not strive to completely eliminate artemia to cut input costs to the extreme. Instead, hatcheries should focus on the cost per million P.L. produced, which is lower with a balanced feeding regime.

The application of specific hatchery health protocols and strict hygiene is also an absolute requirement to exert disease control and obtain robust, disease-resistant postlarvae. The authors have done a lot of research on health products that can increase the resistance of shrimp to stress, handling and disease. Probiotics, for example, have proven their effectiveness in promoting survival, growth and resistance to pathogenic Vibrio strains.

In a test performed in early 2014 at the Fitmar commercial hatchery in Mexico, the application of a selected mixture of Bacillus strains yielded larger P.L. and improved survival in both the hatchery and nursery stages. The mechanisms involved in the observed improvements were colonization of the gut, inhibition or competition with Vibrios leading to a reduced abundance of potential pathogens and improved stimulation of the immune system of the shrimp.

A probiotic mixture containing spores of Bacillus subtilis, B. licheniformis and B. pumilus in the concentration of 5.0 x 1010 CFU/g was tested in the Laboratorio de Tecnologia em Aquicultura in Recife, Brazil, during short larval trials with L. vannamei. In these trials, the use of probionts increased survival and growth in the zoea and mysis stages. There was also a clear reduction in the amount of Vibrio in both the water and shrimp larvae. Finally, a challenge test showed that the probiotic increased the resistance of larvae to the pathogenic Vibrio harveyi, as shown in Figure 2.

The combined effects of probiotics and immunostimulants allow significant improvements in hatchery and nursery culture performance, P.L. robustness and biosecurity.

Reports from the aquaculture industry state that P.L. quality has an influence all the way through the end of the growout cycle. The improvements in shrimp nursery practices in Mexico and several Asian countries are a clear indication of the increased awareness of this concept.

The use of a nursery allows stocking larger, more robust postlarvae and acclimates P.L. to pond conditions. Nurseries also provide improved feeding efficiency, more controlled conditions than in ponds, and improve biosecurity and facility utilization. As a result, a nursery phase generally improves the cost efficiency of shrimp grow-out operations.

Improving hatchery protocols and/or implementation of a nursery phase comes with a cost, obviously, but the cost impact is minor, and the gains in culture performance and P.L. quality are big. Indeed, the cost of P.L. production is very small compared to the cost of juvenile production.

Table 2 presents a calculation of the cost to produce 1 million postlarvae, compared to the cost to raise these postlarvae to market-size shrimp. The cost of the hatchery phase is around U.S. $2,600, including the cost for shrimp nauplii production, while the next step in grow-out costs over 20 times more.

Clearly, gross margins are mainly made during grow-out, and for farmers, it is worth spending a bit more money on quality-tested postlarvae, rather than purchasing P.L. from a hatchery that may cut costs at the expense of P.L. robustness. Ironically, the cost per million P.L. produced increases when costs for hatchery feeds and health protocols are drastically cut.

Editor’s Note: This article is the first of three contributions on the quality of shrimp postlarvae. In the next issue of the Global Aquaculture Advocate, Part II will address the links between P.L. quality and performance in growout ponds, and Part III will show trial and survey results. 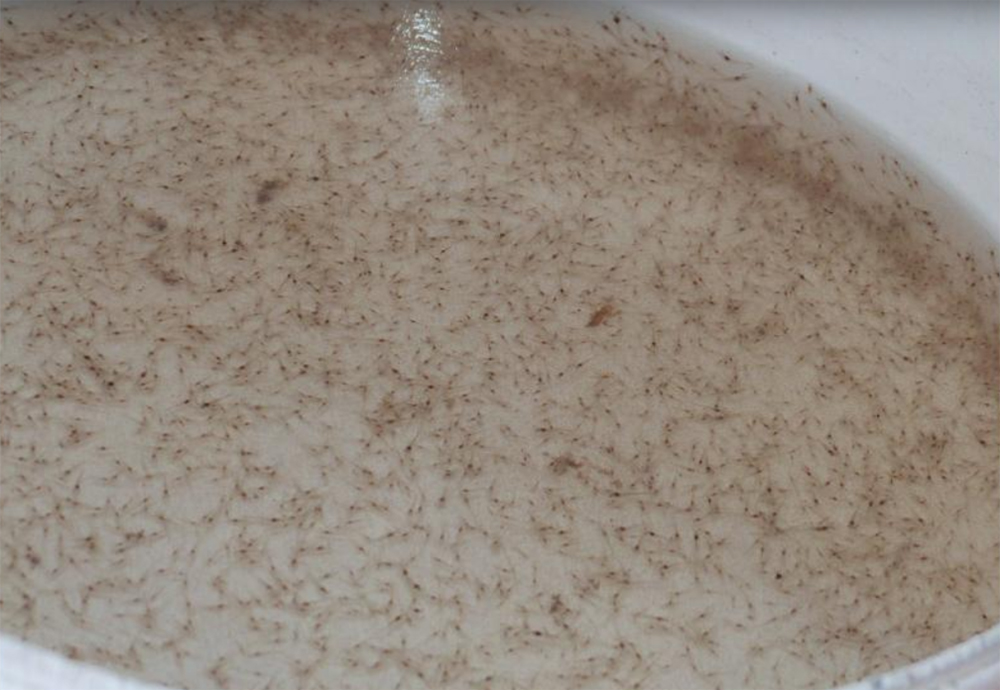 This study evaluated the relationship between the molting stage, age and osmotic stress in Pacific white shrimp postlarvae. The results indicate that osmotic stress tests should be done only with at least PL12 at the intermolt stage and that were cultured at 35 ppt salinity and 29 degrees-C.