Increasing economic efficiency in aquaculture production systems relies on continuous improvement and the use of breeding programs. This is why most large shrimp hatcheries develop breeding programs oriented to increase growth traits, survival and/or disease resistance. However, in the long run, these programs increase inbreeding in the genetic nucleus populations of these hatcheries.

Inbreeding causes a reduction in genetic variation, compromises responses to selection in future generations and can end up depressing animal growth, survival and reproductive performance. Given the high shrimp prolificacy, breeding programs usually include a rather limited number of selected progenitors, which increases the likelihood of mating related animals.

The breeding program at Maricultura del Pacífico, the largest shrimp hatchery in Mexico, is designed to increase growth and survival, and is based on a two-stage selection program. The first stage is based on growth at 28 days of age and starts with 300 families. The second stage starts with the best 150 families and considers a selection index for growth at 130 days of age and survival from 70 to 130 days of age in four different growth environment ponds. The breeding program keeps strict control on the pedigree of every animal, which helps keep inbreeding in the genetic nucleus population at a minimum.

The hatchery started operations in 1998, and by 2009, its pedigree included 2,485 progenitors and more than 175,000 animals. In 2009, the inbreeding in the nucleus population was estimated as 3.1 percent. Maricultura del Pacífico also has a conservation line separated from the first one. This line is under selection as well, but its main objective is to serve as a future source of genetic variation.

The animal-breeding team is also doing applied research to improve and evaluate the breeding program in the hatchery. Studies are examining the use of genetic markers for parental assignation and to evaluate genetic changes associated with the breeding program. The potential effects of high inbreeding levels are under study, too, as well as ways to improve the current artificial insemination practices.

Preliminary results showed no adverse effects of inbreeding on body weight at 130 days of age, survival from 70 to 130 days of age and the number of eggs per spawn. However, the fertilization rate and number of nauplii yielded per high-inbred female were lower than those observed in the control line (Table 1).

Although growth and survival did not seem to be affected within the range of the studied inbreeding levels, it is noteworthy that the shrimp under study grew only under one set of environmental condition. In the next stages of this experiment, inbred animals will be grown and evaluated under several of Mexico’s typical commercial farm conditions. 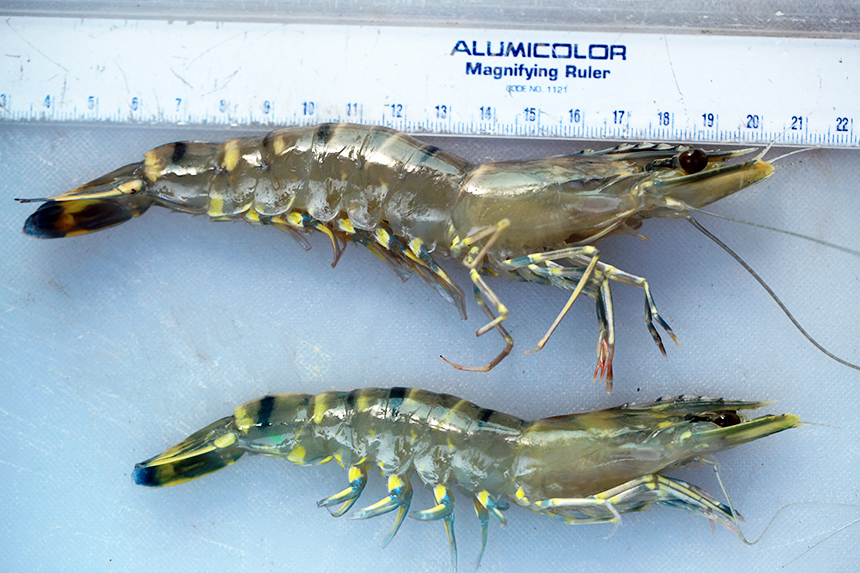 Shrimp-breeding programs release only a small fraction of their genetic material when they sell seed to clients for grow-out. This protects their large investment in developing the stocks so clients return for their next batch of seed instead of breeding the stocks themselves.