With strong domestic seafood demand and ample areas for aquaculture activity, a land of opportunity lies just south of the U.S. border

To see the future of aquaculture in Mexico, set aside that crystal ball and gaze into a bowl of ceviche.

From shrimp to tilapia to catfish to trout, it’s not the export market but a homegrown hunger for seafood driving much of aquaculture’s growth in Mexico. With a population of 122 million people devouring an average of 26 pounds of seafood per year, Mexico consumes more fish and shellfish than it can currently produce.

“It’s a huge market,” said Bill Hoenig, VP-operations and sales for Delta Blue Aquaculture, a United States-based company that produces shrimp in Mexico and Belize. “That’s the story of Mexico in a nutshell, when it comes to aquaculture development – the fact that there’s a great deal of internal appetite for the product.”

“Almost everything that is produced here is consumed in Mexico,” agreed Antonio Garza de Yta, director of the World Aquaculture Society and rector at Universidad Tecnológica del Mar de Tamaulipas Bicentenario. “We have a big demand that we cannot actually fulfill yet.”

While the industry still faces some growing pains – including many of the challenges that typically come with doing business in a developing nation – aquaculture in Mexico is expanding. Ample space, mild temperatures, a ready workforce and streamlined permitting create the right climate for growth, according to Garza de Yta. “There is a lot of potential,” he said.

Trout farmer Citlali Gomez Lepe has seen that growth firsthand. When her mother and grandfather started the family business 25 years ago with four “rustic” trout ponds in the town of Zitacuaro, Michoacán, they were among the first to raise trout commercially. Now there are more than 700 trout farmers in Mexico, she said.

“Definitely, the last 10 years has been the main growth that aquaculture in Mexico has had,” she said.

Her farm, Nemi Natura, which Gomez Lepe runs with her husband, has expanded as well, and now has more than 60 ponds and 18 employees. They produce around 60 tons of trout per year and recently began breeding bullfrogs, and sell the legs to chefs throughout Mexico.

Almost everything that is produced here is consumed in Mexico. We have a big demand that we cannot actually fulfill yet.

Trout is one of the country’s top success stories in aquaculture, said Garza de Yta. Most trout farms are small family operations like Gomez Lepe’s but the industry is specialized, established and well organized, with farmers working together to market and distribute their product, almost all of which is consumed in Mexico, he added. The industry brought investment and employment to remote, mountainous areas of the country.

Tilapia, on the other hand, is farmed in every state in Mexico, with more than 2,000 small farms across the country, but has been less profitable due to poorly designed infrastructure and lack of organization within the industry, Garza de Yta says.

Shrimp farming is well established in the northwest part of the country, and shrimp is the country’s top aquaculture product in terms of both volume and monetary value, he said. Yet with a production rate of only around 1 ton per hectare per year, Garza de Yta sees potential for growth by increasing efficiency and farming more intensively. “It’s extremely low,” he said.

Regions like the Sea of Cortez boast ideal conditions for aquaculture activities and plenty of available space, not to mention the infrastructure and facilities to grow species like yellowtail, striped bass, and totoaba.

Unlike inland farms, growth in offshore aquaculture is largely being driven by the export market. It’s also proving more attractive to U.S. investors, who find Mexico has a more favorable regulatory environment. “You can get a permit in Mexico in less than one year,” Garza de Yta said. “It’s easy when you compare it to how hard it is to start mariculture in the U.S.”

That was the experience of Neil Anthony Sims, co-founder and co-CEO of Kampachi Farms. After working in Hawaii aquaculture for more than 26 years, including offshore kampachi (yellowtail, seriola) farming, and experimental unanchored net pens, Sims and his partner wanted a place to scale up to a larger commercial operation. They turned to Mexico and the Sea of Cortez for its “vast” ocean space, easy road access to U.S. markets and friendly regulatory environment.

“There is a clearly defined path for permits, and it works,” Sims said. “If you apply for permits in a place that makes sense for aquaculture, you can reasonably expect to get the permit.”

That stood in marked contrast to Sims’ experience in Hawaii, where he reported going through an intensive, two-year review process, including a full environmental assessment, not just to launch his unanchored research project, but for each time he sought to stock the pens with new fish. The Mexican government has also shown its support by providing facilities, water and electricity for the company’s broodstock program. “They’re eager to work more closely with the industry,” Sims added.

Still, aquaculture in Mexico faces some challenges. Investing in an emerging market like Mexico is “always riskier” than in a more developed economy, Hoenig cautioned. Navigating the courts and legal system or government agencies often comes down to “who you know, not what you know,” he said.

And thanks to “the hangover of colonialism,” the Mexican government may greet big, foreign companies with more skepticism than local investors, said Hoenig: “They’re more attuned to artisanal, homegrown projects, because it puts more people to work.”

Corruption and violence are legitimate concerns in some areas of the country, added Garza de Yta. In the states of Tamaulipas and Michoacán for example, catfish production plummeted from 10,000 tons to 3,000 tons when drug violence destabilized the area in recent years. Production is now starting to bounce back as the violence has subsided. “Things are not as bad as they were,” he said.

You can get a permit in Mexico in less than one year. It’s easy when you compare it to how hard it is to start mariculture in the U.S.

Resources are often limited. Garza de Yta noted that electricity costs are much higher in Mexico than in the United States, and most of the available feed is of poor quality or is poorly managed. In addition, there has been a lack of investment in research, he said.

While countries like the United States and China have invested in genetic improvements to fish stocks and other research to support the growth of the industry, “in Mexico, the researcher and the industry are completely divorced,” Garza de Yta lamented. That’s something he’s now working to change, starting by organizing meetings between scientists and industry leaders, including at his university. “We have to improve our capacity at every level,” he said.

Despite the challenges, Hoenig is optimistic that the rise of aquaculture in Mexico, fueled by homegrown appetites and facilitated by the country’s natural resources and open-for-business attitude, won’t taper off anytime soon. “It’s definitely a growth situation,” he said. 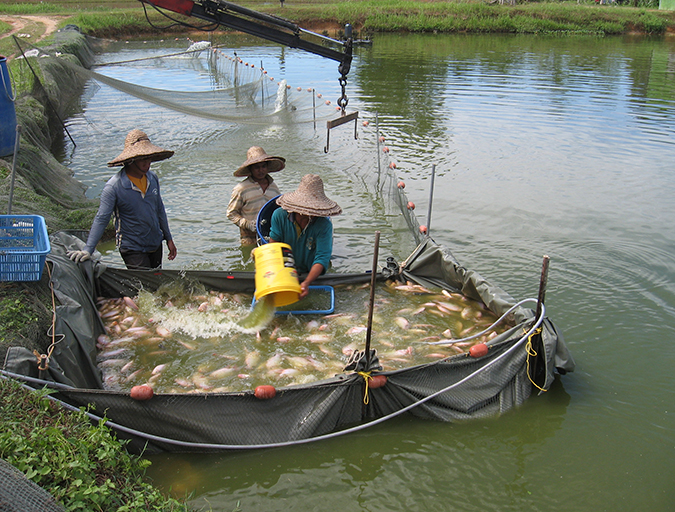 Fisheries and aquaculture: Sister activities with a common goal

Aquaculture and fisheries – although significantly different as one is farming and the other one is hunting – are very closely related activities that share many components of their value chains, including their markets and customers.