Commercial marine salt mixes can represent a significant portion of production costs for inland shrimp producers. Reducing such costs is critical for the profitability of shrimp farms as the intensive indoor shrimp industry grows. Simplifying these salt mixes down to only essential elements may reduce costs for producers by reducing the number of ingredients and facilitating homemade salt mixes.

A previous experiment found that there were no significant differences in shrimp production when using five salt mixtures. Although there were no significant differences in that study, shrimp survival in the 100 percent least cost salt mix (LCS), treatment was low at 57 percent, whereas the other treatments averaged 70 percent survival. The same LCS was also used by other authors, who reported it to be suitable for shrimp nursery settings; however, the effectiveness of LCS in an intensive grow-out setting is still unclear.

This study was conducted at the Kentucky State University Sustainable Aquaculture Development Lab (SADL), an insulated and climate-controlled building used for indoor aquaculture research. To further investigate the previously reported decreased shrimp performance in 100 percent LCS, this experiment used six salt different ratios of LCS and CSS between 100% LCS and 75% LCS:25% CSS. The treatments used in this study were 100% LCS, 97.5% LCS, 95% LCS, 90% LCS, 80% LCS, and 75% LCS. Five treatments were developed for this experiment, each with four replicated tanks for a total of 20 tanks. Each treatment used different combinations of two salt mixes to reach the target salinity.

Post-nursery Pacific white shrimp (Litopenaeus vannamei)  ̶  purchased from a commercial hatchery (American Mariculture, Inc., St. James City, FL, USA) and reared at the SADL through a nursery period  ̶  were stocked into the experimental tanks at 262 shrimp per cubic meter at an average individual shrimp weight of 2.9 grams per shrimp. The study lasted 86 days, and at harvest, all shrimp were weighed and counted. The data gathered from the harvest was used to calculate the average weight per shrimp, growth rates, FCR, survival and total harvest weight per cubic meter.

For detailed information on the experimental design, rearing conditions and animal husbandry; LCS treatments, and data management and analysis, refer to the original publication.

Although there were significant differences between treatments in DO levels, pH, salinity, and turbidity, these minute differences likely had little effect on the overall performance of the shrimp and were all acceptable. There were no significant differences found between treatments in temperature, total suspended solids (TSS), or volatile suspended solids (VSS). Importantly, pH levels were maintained when using the LCS, even though a single source of alkalinity is used in the mixture (sodium bicarbonate). A complete sea salt mixture would likely include multiple buffers, such as calcium, potassium, and magnesium carbonate compounds.

The lack of significant differences in shrimp production between treatments has important implications for shrimp producers. The increased concentration of LCS used in production appears to have no detrimental impact on shrimp performance. The overall average survival was just above 80 percent, the average FCR was 1.5 across all treatments, and the average growth rate was 1.5 grams per week, all comparable to or exceeding recent shrimp studies using reduced-cost salt mixtures and commercial mixtures at similar salinities.

Table 1. Mean ± SD shrimp production metrics at harvest between each treatment (treatments are based on the amount of least cost salt (LCS) included; the remainder of the salt mixture was a commercial sea salt). There were no significant differences between treatments with regard to these metrics. Adapted from the original.

Shrimp in this study reached an average of 21.6 grams individually at 86 days, a size that is within the range preferred by consumers in North America, Europe, and other regions. This production time scale falls within a competitive harvest schedule and the shrimp size is at the highest of the range recommended by Zhou and Hanson in their economic model, suggesting that the results of this study are commercially relevant.

These results further demonstrate the utility of this reduced-cost salt mix across several stages of shrimp growth, as the study by Galkanda-Arachchige, et al., used an identical low-cost mixture and found equal performance of post-larval and juvenile shrimp between both low-cost and commercial salt mixes.

The similar shrimp performance between treatments, regardless of LCS concentration, influences the economics of shrimp production operations. The cost difference in salt between the 75 percent LCS and 100 percent LCS was just over $4 per cubic meter, which could lead to significant cost savings for shrimp producers, especially those operating at a large scale. The lower salt cost also reduced the cost of production by 15 percent over the CSS formulation.

Although many shrimp production methods, including biofloc and hybrid systems, are designed to greatly reduce water use, some water is still discharged from the systems during normal operation. The loss of this water (3 to 10 percent per production cycle) is usually replaced with newly mixed salt water, increasing salt use and production costs long term, which would be partially negated by replacement with the LCS mixture. The economics of pond-based shrimp farming are well studied; however, the feasibility of high intensity, indoor shrimp production is still unclear due to substantial upfront costs and variable system designs and production strategies. Any reduction in production cost may have significant impacts on this relatively new shrimp production style.

The salts that were used to make the LCS formulation in this study were each purchased in 23 kg bags that were shipped several hundred kilometers. However, in a commercial setting, it is more likely that farmers would purchase these in bulk quantities and from local vendors if possible. This commercial-scale strategy would likely reduce the cost of the mixture even further.

Results of this study show the feasibility and cost savings of a low-cost, easily made salt mixture in high-intensity indoor shrimp production. The use of the LCS mixture should be considered by shrimp producers due to the significant decrease in production costs, similar shrimp performance, and water quality compared to a commercial marine salt mixture. Further research should examine the long-term water quality dynamics associated with the LCS formula and how mineral concentrations may change over time. 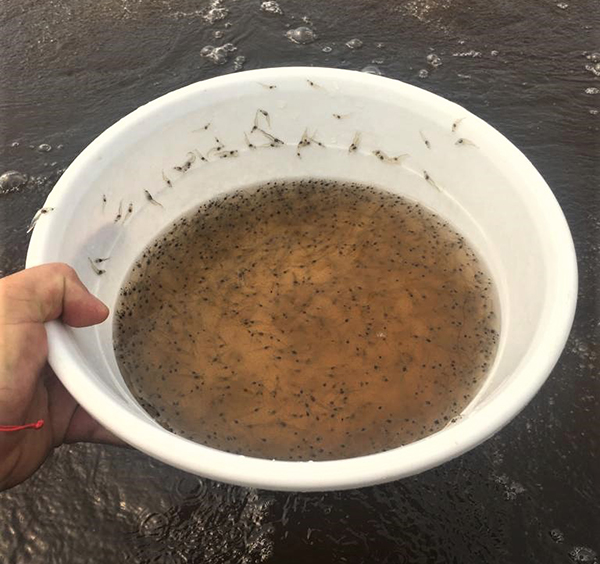 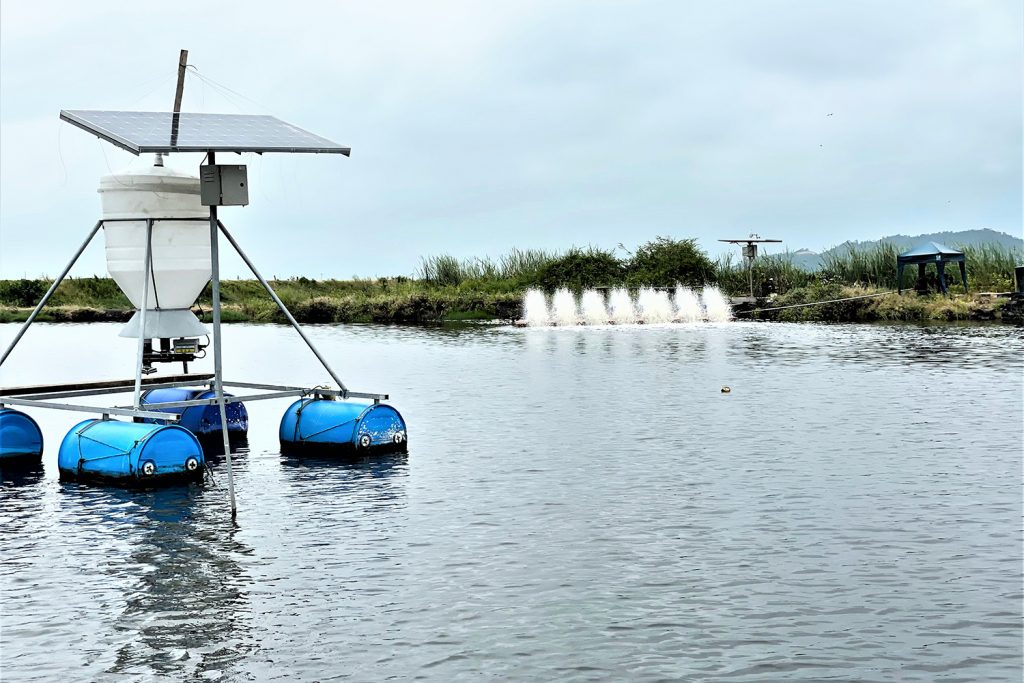 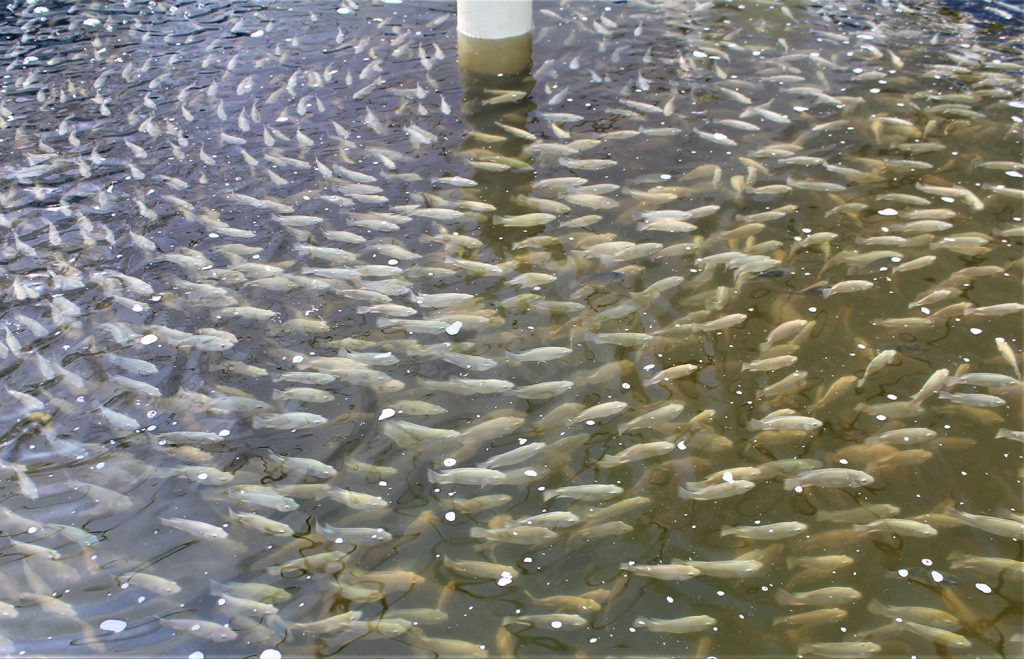 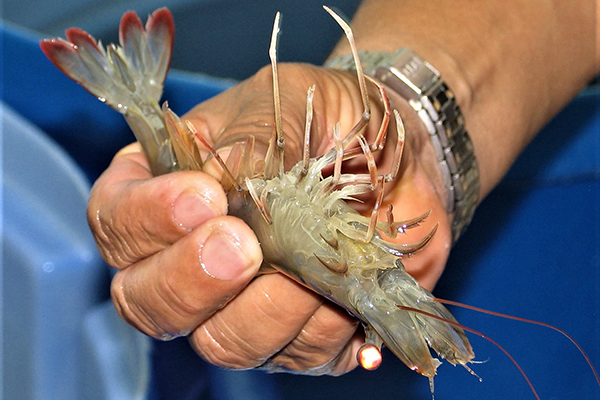