The California halibut (Paralichthys californicus) is a marine subtropical flatfish species distributed from central California, USA, to Baja California, Mexico. It supports a small but valuable sport and commercial fishery, and is also a candidate for developing and diversifying California marine aquaculture.

Unfortunately, as with many other marine fish stocks, commercial catches of California halibut on the North American Pacific Coast have decreased over the last decades, from 2,500 metric tons (MT) per year in 1920 to just over 227 MT per year. Current catches are worth around U.S. $13 million.

The importance of the fishery and the historical decline of the stock have stimulated research on the stock enhancement, aquaculture, and ecology of this species. The authors recently evaluated the physical deterioration of first-feeding California halibut larvae using morphometric and histological criteria.

The initial feeding time for fish larvae is considered a critical period during their early development because it influences their subsequent survival and growth. Short periods of food deprivation when yolk sac reserves are depleted can result in abnormal behavioral and morphological development, degeneration of the digestive system and trunk musculature, and reductions in feed utilization and efficiency. Consequently, the question of when exogenous feeding normally occurs is very important, especially in fish culture, where food availability can be manipulated.

The time interval from hatching to the complete resorption of yolk reserves is temperature-dependent. In California halibut, this period is two to three days at 18 degrees-C. At this age, larvae are about 2.7 mm in standard length and have fully pigmented eyes. They actively swim in the water column and start feeding on enriched rotifers.

As most marine planktonic fish larvae, California halibut larvae are visual feeders. Thus, eye pigmentation, as well as changes in behavior and distribution of larvae in the rearing tank, can be used as visual criteria to start feeding and evaluate larval performance. Mouth opening can not be considered a criterion to start feeding larvae, since their mouths open earlier.

Larvae can withstand starvation and resume feeding and growth if food is provided up to six days after hatching. Longer periods of starvation are irreversible, and even larvae able to capture live preys are not able to digest them and die.

The authors’ experiments at the University of California showed that any delay in the first feeding of California halibut larvae depresses growth, changes body morphometrics, and alters the digestive system and trunk musculature. Once yolk sac and oil globule reserves are exhausted, the histological organization of different regions of the body progressively deteriorates.

The histopathological changes in food-deprived California halibut larvae were similar to those observed in other teleost species. They included changes in liver organization, decreases in the glycogen and lipids stored in hepatocytes, reduction in the height of the enterocytes of the intestine, and proteolysis of the intestinal mucosa. Degeneration of the exocrine pancreas, an increase of gall bladder volume, and degeneration of trunk musculature were also observed.

Most of these alterations implied a reduction of the nutrient absorption surface area. This compromised the digestive capabilities of refeeding larvae and directly affected their growth and survival.

Larval morphology and growth are significantly affected by the time of first exogenous feeding. Since starvation arrests normal tissue synthesis, a reduction in growth with increasing degrees of starvation was expected.

Changes in head length and tail height are the most relevant fasting-induced changes. Among the body characters studied, head length:standard length and tail height-standard length ratios were the most sensitive variables to measure the level of starvation, while variables such as eye diameter, head height, and trunk and tail length were less sensitive in discriminating the effects of first feeding timing.

At notochord flexion, larvae fed for the first time at three days after hatching were 5 percent larger than those fed initially at four and five days old. Similarly, the standard length was more uniform for larvae first fed at four and five days than larvae fed when their yolk sac reserves were depleted. Significant changes in the anterior and posterior enterocyte heights were detected after two days of food deprivation.

In aquaculture, where feed usually is not limited, such differences in larval size may not have a direct effect on fish size due to posterior compensatory growth. However, if differences in size distribution are too great and extended through metamorphosis, they promote competitive interactions and cannibalism, increase food wastage, and thereby reduce production efficiency.

Starvation directly affects the nutritional status of first-feeding California halibut larvae, which can be evaluated by combining histological and morphological criteria. This information represents a valuable tool for fish producers and researchers to evaluate new feeding procedures and diets. 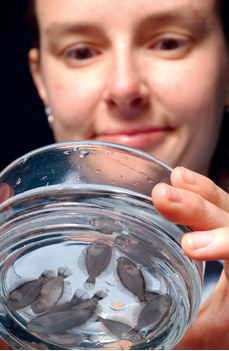