The California halibut (Paralichthys californicus) is a highly sought-after flatfish that can reach a length of 152 cm and weight of 33 kg. It is the largest member of the genus Paralichthys. The species supports both commercial and sport fisheries, but landings have declined dramatically from peak catches in the 1920s.

Farming halibut for food and stock replenishment has been given consideration in the U.S. state of California since the early 1980s as a way to alleviate pressure on natural stocks. Hubbs-SeaWorld Research Institute (HSWRI) has been involved with halibut culture research off and on throughout this period.

Recently, HSWRI has been at the forefront of utilizing traditional and new techniques to help catalyze halibut farming. Among the more novel techniques has been the utilization of shallow-water raceways for juvenile culture, which follows preliminary work conducted in 1999 by Victor Øiestad and the more recent integration of larval and nursery systems.

Over the past eight years, HSWRI has maintained a broodstock population of 13-30 California halibut that produce viable eggs on a daily basis when temperatures are 15 to 21 degrees-C. The broodstock are housed in a 44-cubic-meter tank maintained under ambient temperature and photoperiod.

Traditionally, eggs have been hatched in 1.5-meter-diameter, 0.7-meter-deep tanks, where the larvae remained through metamorphosis and settlement at approximately 30 days post-hatch. Settled juveniles were ultimately transferred to larger flat-bottom tanks or raceways. During the culture process, the authors identified several areas that could be improved and addressed them by developing an integrated larval-nursery recirculating aquaculture system (RAS).

The design criteria for the new production system included vertical racks to minimize the footprint and a passive, presettlement larval transfer mechanism to minimize fish stress. They also addressed expandability for commercial application, self-cleaning properties to reduce labor and independent, low-maintenance filtration components for both modules.

Egg incubation and larval rearing are conducted in eight black, 1.2-meter-diameter, 1,600-liter cone-bottom tanks nested in two groups of four. The tanks are operated in an RAS comprised of an 84-liter drop bead filter as a bioclarifier, 120-watt untraviolet sterilizer and 3-hp heat exchanger for temperature control.

Water flow is provided from the top and bottom at 5-7 liters per minute, depending on the age of larvae. Each incubator is stocked with approximately 160,000 eggs. The expected larval survival of 50 to 75 percent yields 80,000 to 120,000 larvae at 25 to 30 days post-hatch using traditional green-water rearing techniques.

Directly adjacent to the larval-rearing cone tanks are two sets of three fiberglass raceways configured in a vertical rack. Each raceway is 5.8 x 0.5 x 0.3 meters and operated in an RAS that is independent of the larval-rearing system. The raceways are constructed of 2.7-meter flanged sections that can be combined end to end to increase the length of the raceways

The raceway RAS consists of a microscreen drum filter, fluidized-bed bioreactor, packed column, oxygen cone and 150-watt ultraviolet sterilizer per raceway bank. Flow rates in each raceway range 10-250 liters per minute, generating current velocities of 0.5-33.0 cm per second. Flow rate, velocity and water depth are all adjusted to maximize self cleaning while preventing the impingement of fish on the exclusion screens.

The system capacity currently is limited by the culture surface area. Due to spatial constraints, the raceways at HSWRI are built with only two flanged sections instead of the six sections for which the RAS was designed. This equates to a surface area of 2.9 square meters versus 8.5 square meters and limits the production output to 35,000 1.5-gram fish at 200 percent bottom coverage instead of 110,000 fish.

Preliminary results from an initial trial showed that egg quality was good, as characterized by nearly 82 percent egg viability, 84 percent hatching rate and 91 percent survival to first feeding. The eggs were stocked into four incubator tanks at a density of 100 eggs per liter. All tanks were maintained at 17.7 ± 1.0 degrees–C under ambient lighting with water flow set at 5 liters per minute.

The larvae were reared using traditional green-water and enriched rotifer and artemia live feeds until 27 days post-hatch (dph). The pelagic larvae were then transferred to the raceway RAS by transfer pipes that exited the cone tanks at an elevation corresponding to one of the three vertically stacked raceways. The process took approximately two days when transfer flows were set at 8-12 liters per minute. There were no observable negative effects on fish health from the transfer.

Dry feed was introduced to the juveniles at 32 dph, and weaning was complete by 45 dph. In the raceways, water flow rates and depth were adjusted based on the stage of fish development – 10-90 l/minute and 5.1 to 30.5 cm. This created water velocities of 0.6 to 6.0 cm/second, which were maintained at a relative rate of 1.0 to 1.5 body length per second to promote self cleaning and faster growth.

Overall, the system worked very well for the first trial. Halibut grew to 4 grams by 96 dph. Although initial larval survival was very high, survival to juvenile stage was only 1 to 2 percent. No disease outbreaks were observed, but significant losses occurred from aggression and cannibalism in the shallow raceways as pelagic larvae were “harassed” by larger, settled siblings. The next rearing trials will incorporate aggressive grading and weaning protocols to minimize these losses. 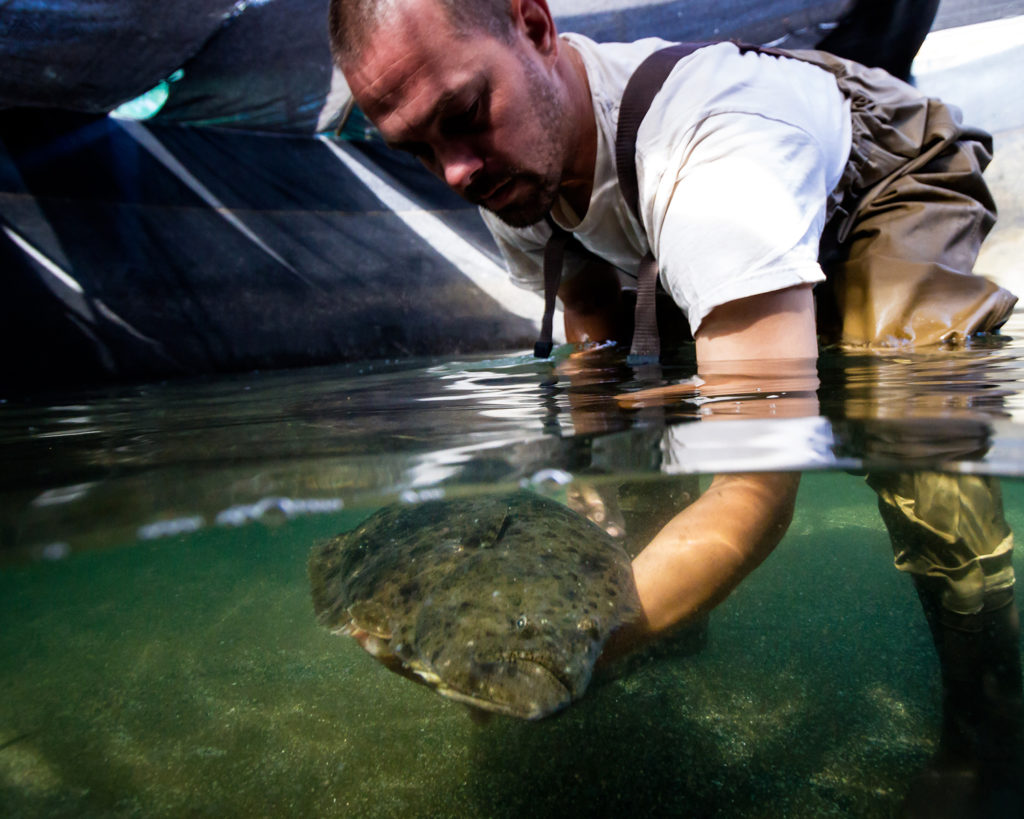 Research delves into enrichment of live feed for larval fish

A two-year grant of $276,000 seeks to improve the nutrition of live feed for, and therefore the production of, larval California yellowtail and halibut, with the hopes that the technology will be applicable to other species. 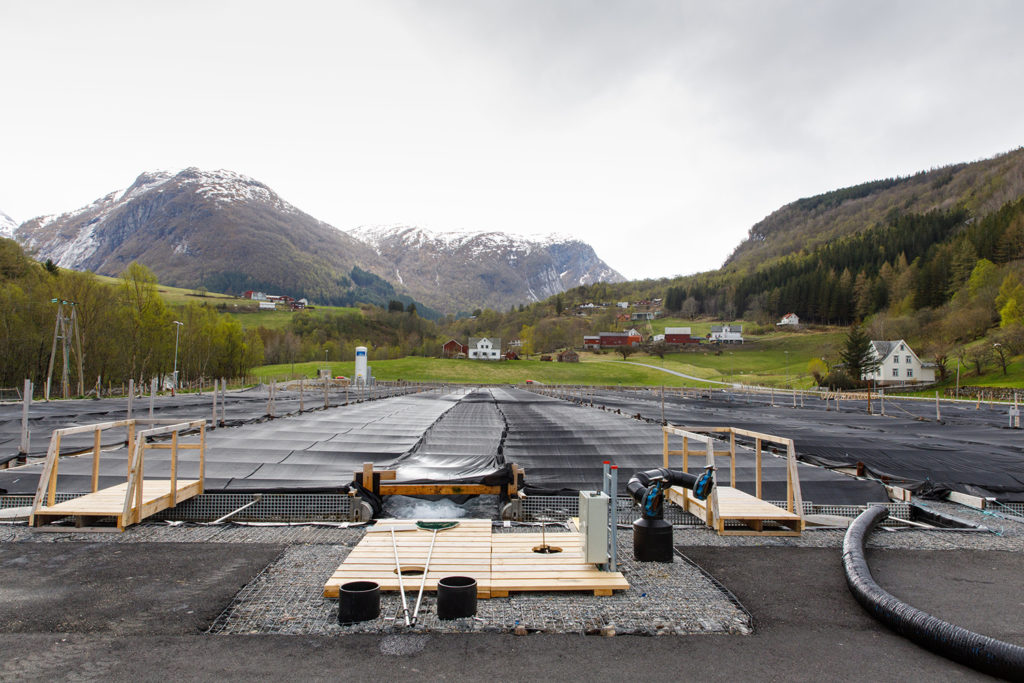