Single-tank IMTA system has best bioremediation performance, biomass production at half the operational size as other designs

Integrated multi-trophic aquaculture (IMTA) is an ecosystem-based approach where species of different trophic levels are integrated to maximize the recovery of nutrients introduced in the production system. Unused nutrients (uneaten feed and faeces) derived from fed species (e.g., fish and crustaceans) that are commonly wasted through farm effluents are recovered into valuable extractive species biomass, while also achieving effluent bioremediation.

Aquatic species farmed in saltwater excrete between 50 to 80 percent of their feed nitrogen (N) and 35 to 85 percent of their feed phosphorus (P), which is wasteful and affects the environment, as farm effluents usually need to be treated to meet legal regulations to enable their release into the aquatic environment. This constrain can be overcome if such excess of nutrients is recovered through bioremediation from the saltwater aquaculture effluents.

Modern recirculating aquaculture systems (RAS) have allowed culturing saltwater species everywhere, including locations away from marine water sources. However, one of the biggest concerns when operating these systems is the management and costs associated to the reduction/removal of nutrient loads present in effluent water, as saline nutrient-rich effluent cannot be directly discarded/used inland so as to prevent soil salinization.

Unused nutrients that are commonly wasted in aquaculture effluents are composed by particulate organic matter (POM), dissolved organic matter (DOM) [including dissolved organic nitrogen (DON) and phosphorus (DOP)] and as dissolved inorganic nutrients]. The recovery of dissolved inorganic nutrients can be accomplished using primary producers as extractive species – such as microalgae, seaweeds and halophytes [salt-tolerant plants that grow in soil or waters of high salinity] – while the recovery of POM can be implemented using deposit-feeder and filter-feeder organisms like polychaete worms and bivalves.

This article – adapted and summarized from the original publication [Jerónimo, D. et al. 2021. Recovering wasted nutrients from shrimp farming through the combined culture of polychaetes and halophytes. Sci Rep11, 6587 (2021)] – reports on a study that evaluated the bioremediation performance and biomass production of the combined culture of polychaetes and halophytes, namely, A. marina and S. ramosissima (Amar + Sram) and H. diversicolor and S. ramosissima (Hdiv + Sram) using the effluent water from a shrimp RAS operated with pre-treated saline groundwater (~20 ppt salinity). These different IMTA designs were tested using different operational areas including a single polyculture tank (1-T) and as two trophic levels with two separate tanks (2-T) with 0.3 and 0.6 square meters of operational area, respectively.

This study was carried out at RiaSearch Lda., an aquaculture nutrition research company located in the coastal lagoon Ria de Aveiro, Portugal. The company uses recirculating aquaculture systems (RAS) to grow Pacific white shrimp (Litopenaeus vannamei) and operates with brackish groundwater that is pre-treated through chemical oxidation and rapid sand filtration to remove iron. Water from this system was used in the different Integrated multi-trophic aquaculture (IMTA) designs and used polychaete assisted sand filters (PASFs) and halophytes. All extractive species tested in the present work can be easily collected and are highly abundant in the study site. A schematic representation of the different IMTA designs tested in the present study is shown in Fig. 1a.

Designs 1-TAmar + Sram and 2-TAmar + Sram were stocked with the polychaete A. marina and the halophyte S. ramosissima, while designs 1-T Hdiv + Sram and 2-T Hdiv + Sram were stocked with the polychaete H. diversicolor and the halophyte S. ramosissima. Designs with 1-T cultured polychaetes and halophytes in the same tank (operational area ≈ 0.3 square meters), with the roots of S. ramosissima maintained in the water column of the PASFs. 2-T designs cultured both extractive species in separate tanks (operational area ≈ 0.6 square meters) with the water passing through the sand bed then being directed to the aquaponics unit. In 1-T designs, inflowing water entered the PASFs tanks through a pipe. Each of the four IMTA designs performed in this study was evaluated using five replicates (Fig. 1b). Five control units with no polychaetes and no halophytes were also included in the experimental design.

For detailed information on the experimental design and setup; polychaete and halophyte species used; IMTA designs; IMTA extractive species culture and monitoring; data collection and determination of photosynthetic pigments of Salicornia ramosissima; and statistical analyses; refer to the original publication.

This study compared bioremediation performance and biomass production through the combined culture of A. marina and S. ramosissima (Amar + Sram) and H. diversicolor and S. ramosissima (Hdiv + Sram) using a single polyculture tank (1-T) and two trophic levels separated tanks (2-T), IMTA designs with different operational areas (0.3 and 0.6 square meters, respectively). The outdoor experiment showed significant variability for water salinity and temperature (~12 to 20 ppt, 16 to 28 degrees-C, respectively), while for pH and dissolved oxygen (DO) more stable values were recorded (8.1 to 8.4 and 6.8 to 9.5 mg/L, respectively). Despite the variability, all these parameters are within the range of values monitored in water and intertidal water pools of the Aveiro Coastal Lagoon, the place of collection of the polychaetes used in our study.

Bioremediation efficiencies of 74 to 87 percent POM, 56 to 64 percent dissolved inorganic nitrogen (DIN) and 60 to 65 percent dissolved inorganic phosphorus (DIP) of inflowing effluent, were reported in 1-T and 2-T IMTA designs stocked with Amar + Sram and Hdiv + Sram. Polychaete assisted sand filters are highly efficient in the retention of POM, which is incorporated into valuable extractive worm biomass.

A very important role was played by the sand bed of polychaetes assisted sand filters (PASFs) by retaining and keeping organic matter (OM) available to sustain the growth of polychaetes, while these organisms promoted bioturbation (sediment re-working and bio-irrigation, which enables dissolved oxygen to reach deeper layers of the substratum), a feature which is paramount to prevent the clogging of the system and maintain the percolation of water through the sand bed. Our results clearly showed this effect, because at the end of the experimental period each of the designs tested stocked with polychaetes remained operational, while control tanks were clogged and water overflowed.

The conversion of POM into valuable worm biomass is expected to occur in PASFs, although this was not the case for those stocked with A. marina, which had mortalities above 90 percent. The biomass of this polychaete species was significantly lower than the biomass produced in designs stocked with H. diversicolor; however, these differences result from the high mortality reported in the 1-T and 2-T designs stocked with A. marina. When comparing the biomass of this polychaete to the biomass produced by H. diversicolor, which has a completely different life cycle, it must be considered that in a 120-day study, at best, we would only be able to compare the biomass gain of initially stocked individuals of A. marina with the biomass gain resulting from juveniles of H. diversicolor produced in the same period.

For H. diversicolor, the culture conditions used were adequate for their development, with the final densities recorded in the 1-T and 2-T IMTA designs being approximately 15 times that of the initial stocking densities (final density ≈ 4000 to 5000 ind. per square meter). No significant differences were found between the H. diversicolor biomass (fresh weight) obtained in 1-T and 2-T designs, with values obtained at the end lower than at the beginning of the experiment (≈ 77 to 100 vs 130 grams per square meter, respectively). Nonetheless, it is important to highlight that the specimens at the end of the experiment corresponded to a newly generated population of juveniles that was just starting to grow and had yet to achieve commercial size.

Concerning the growth performance of halophytes, a significant higher average weight (≈ 2-times higher) was reported for plants cultured under the 1-T design, independently of the polychaete species being stocked. The total biomass reported in 1-T and 2-T designs after 60 days of experimental trial were 5 – 5.7 and 1.7 -2.4-times higher than the initially stocked biomass, representing productivities of edible aboveground biomass of ≈ 150 to 170 and 60 to 90 grams per square meter, respectively. These values were lower than previously reported studies.

In our study, the culture conditions impaired S. ramosissima development. Very early on the trial, plants started to develop a yellowish coloration, with some even exhibiting evident signs of senescence [biological aging, the gradual deterioration of functional characteristics]. At the end of our experimental period, approximately 40 to 60 percent of the plants were no longer viable, with this percentage being slightly higher in the 2-T IMTA design. The development of the yellowish coloration was most likely related to a lack of iron, as all the saltwater used in the shrimp farming system and RAS-IMTA design was pumped from a borehole and pre-treated through chemical oxidation. This treatment promotes the precipitation and removal of iron, along with other elements.

These results may reveal a lack of key elements (micronutrients) to promote plant growth, such as iron, zinc and calcium, which may be biofortified through fertilizers. Another explanation for the yellowish coloration and premature senescence may be associated with the fact of the nutrient rich water employed in this study being stored for three days in a reservoir tank without aeration (a submerged pump only mixed the water five minutes every hour). These conditions may have favored the production of toxic gases, such as hydrogen sulfide, which in plants affects the regulation of plant growth, development and senescence.

However, it is important to note that plants of the genus Salicornia occur predominantly in lower marshes with anoxic [lack of oxygen] conditions and where sulfide levels can be high. Plants cultured in the 1-T and 2-T IMTA designs exhibited lower content of plant pigments like chlorophylls and total carotenoids (≈ 124 to 166, 16 to 26 and 118 to 128 µg/g dry weigh, DW, biomass, respectively) than the ones recorded when they were initially stocked, as well as in conspecifics from the wild (≈ 1912 to 1695, 508 to 661 and 625 to 749 µg/g DW biomass, respectively). This decrease in pigment content may also have been caused by the use of borehole water pre-treated with chemical oxidation.

In general, the 1-T experimental design had the best performance, with similar bioremediation and polychaetes productivities and the best halophyte productivity. It also allowed the reduction by half of the operational area required to implement an IMTA framework using these extractive species.

Our results also showed the significant limitations inherent to the culture of certain extractive species outdoors, for example, when key abiotic conditions like water temperature are difficult to control. In our study, the inability to control this parameter may have impaired the successful culture of A. marina.

On the other hand, our study also showed that effluents from culture systems using brackish groundwater that has been treated to remove iron through chemical oxidation and rapid sand filtration may impair the use of some extractive species for IMTA. Indeed, the lack of iron (and eventually also other trace elements removed during chemical oxidation and rapid sand filtration) may be a bottleneck impairing the successful production of S. ramosissima and other valuable halophyte plants. 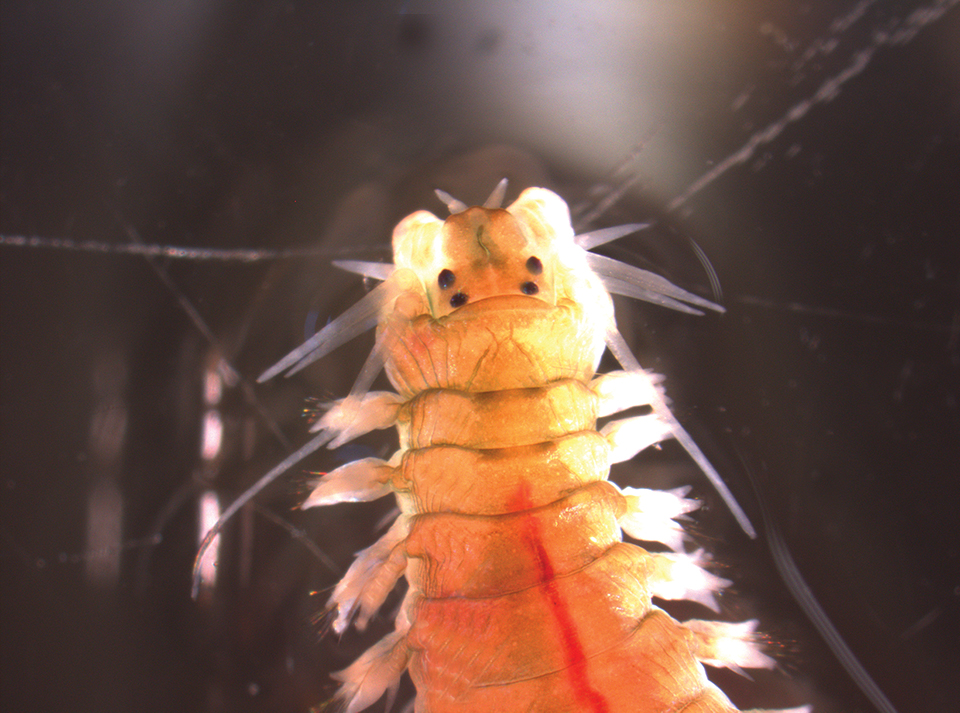 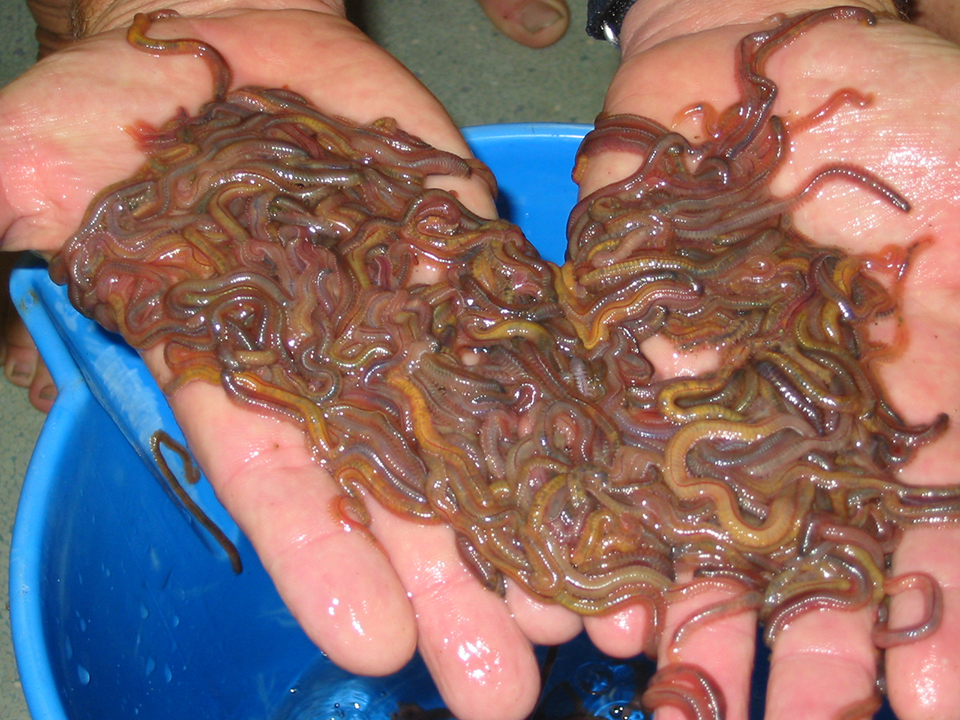 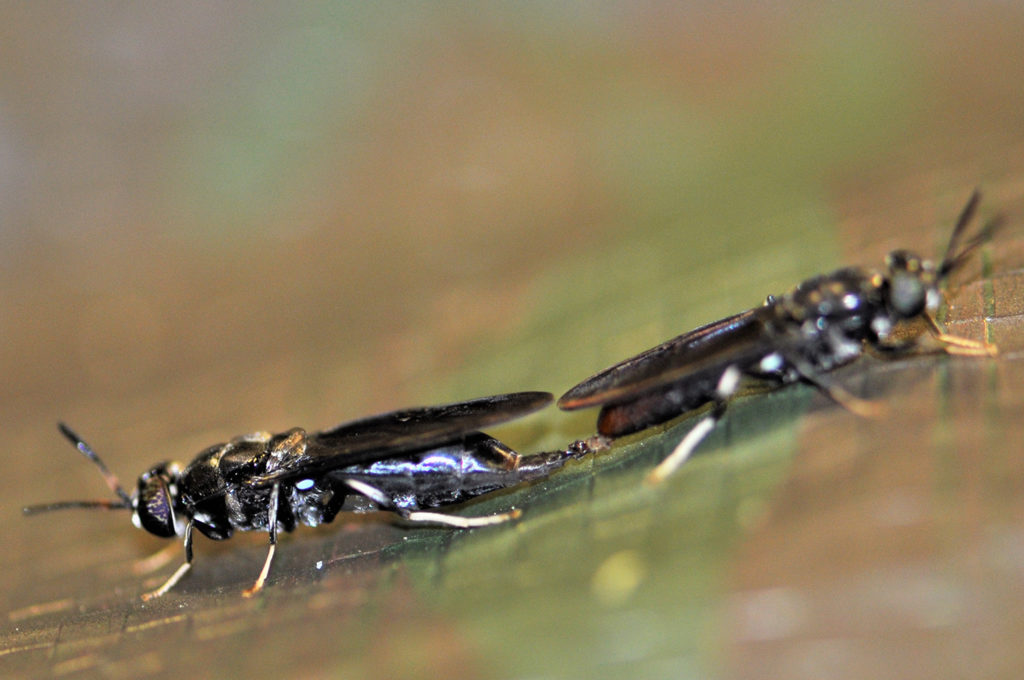 A perspective on shrimp larviculture and liquid larval diets