In Portugal, aquaculture production reflected only 5.4 percent of the total volume produced by the country’s declining capture fisheries in 2007. Of this percentage, mollusk farming in coastal waters focuses mainly on clams (Ruditapes decussatus), oysters (Crassotrea angulata, C. gigas, Ostrea edulis) and mussels (Mytilus edulis). Most of the shellfish industry is located on the country’s southern coast, particularly in the Algarve region.

Aquaculture of marine and brackish water species in Portugal was done traditionally in inland coastal waters, estuaries and coastal lagoons using extensive regimes of production. Since the 1970s, a progressive and continuous decreasing of salt production has resulted in the abandonment of many hectares of salt pans built centuries ago in marsh lands. This land is slowly being converted to aquaculture farms.

Recently, integrated polyculture with mollusks and fish has proven successful at these farms. In fact, the use of salt industry infrastructure like ponds, dikes and water gates for marine aquaculture has become a cheap and easy process to recover the abandoned properties in productive units with fewer environmental impacts.

A modern aquaculture industry has developed in recent years, including nurseries, hatcheries and growout facilities for fish and shellfish species. Based on local technology improvements, the productivity and product quality from these semi-intensive ponds has significantly improved.

The harvesting of bivalve mollusks has been an important component of Portugal’s fisheries since ancient times. The flat oyster (Ostrea edulis) was the main species in value and tonnage until 1900. It was replaced in importance by the Portuguese oyster (Crassostrea angulata) until the 1970s and then by the grooved carpet shell clam (Ruditapes decussatus). Currently, Portuguese production of marine bivalves is strongly dominated by the grooved carpet shell clam, followed by Japanese and Portuguese cupped oysters, and mussels.

The traditional utilization of natural beds is an important gathering activity that sends not only commercial-size bivalves but most of the seed used in the cultivation facilities to market. Including the species named above, several bivalve species are cultured in estuaries, lagoons and “rias” or estuaries formed in flooded river valleys.

The most important and traditional cultivation approach for clams is the intertidal viveiro culture bed, prepared to receive and grow seedstock to commercial size (Table 2). The use of trays and pouches is becoming more popular for oyster culture in subtidal and intertidal area.

Afonso, Number of saltwater and freshwater farms in Portugal, Table 2


Despite the rough conditions of the Portuguese coastline, which is rather exposed and lacks natural shelters such as bays or barrier islands to protect the shore from stormy conditions prevalent during most of the year, new producing systems using suspended rafts or long lines are emerging in offshore areas as an alternative to land-based facilities. The systems grow mostly mussels and oysters.

Mollusk aquaculture in Portugal, like elsewhere, has much potential and high expectations. But a number of challenges, including price variations, strong international competition, and changing consumer needs and expectations, face the industry. Mortality issues from perkinsiosis of carpet shell clams and summer mortalities of Japanese oysters are production constraints that must be efficiently addressed before mollusk aquaculture’s full potential can be realized.

Throughout Europe, debate is taking place as to whether new fish farms, wind farms, tourist facilities or marine and/or coastal protected areas should be established. Competition for space is increasing. In the COEXIST project, partners from 10 European countries are exploring these developments, aiming to increase synergies and reduce conflicts, particularly with regard to the fields of aquaculture and fisheries. 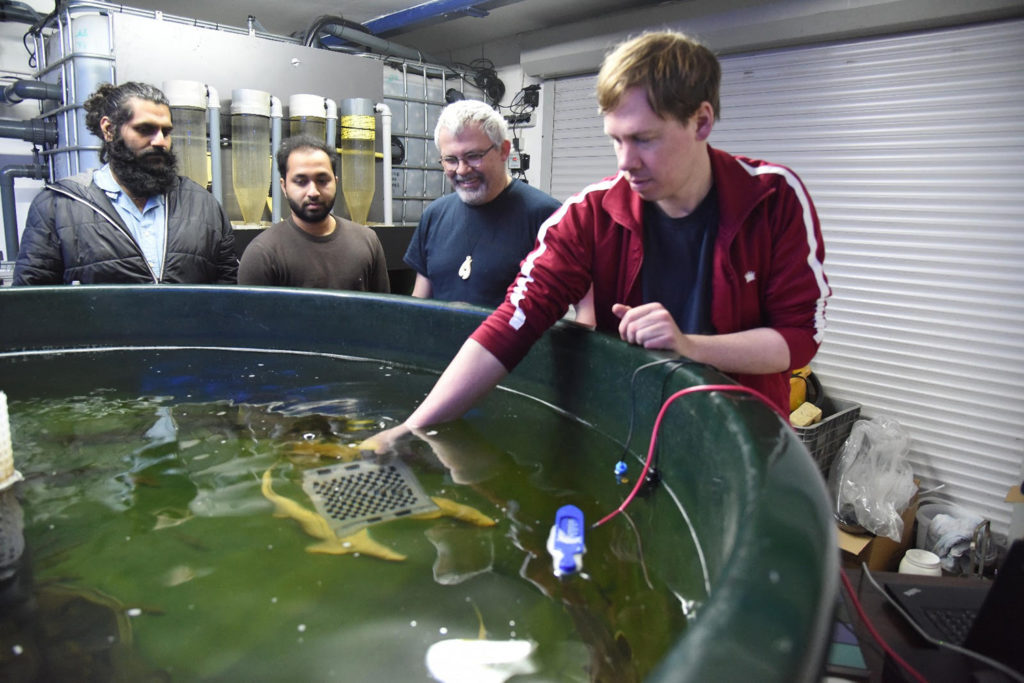