Aquaculture is a relatively young industry, and although technological advances have been rapidly implemented to improve production volume and efficiency for some high-value species, these are slower in reaching the lower-value, high-volume species that support most of the global production. This is typified by genetic improvement technologies, where species such as Atlantic salmon (Salmo salar) have large and well-managed breeding programs akin to those for swine and poultry, while most aquaculture species lag significantly behind.

In part, this is due to the wide diversity of aquaculture species, with the top 20 animal species accounting for less than 80 percent of the total production in contrast to terrestrial livestock, where four species are the source of over 90 percent of the world meat production. In addition, most aquaculture takes place in small to medium-sized farms, primarily situated in low- to medium-income countries. This context hinders the implementation of emerging technologies to help improve production, primarily due to their prohibitive cost.

One established technology is genomic selection, which utilizes genetic markers to identify the animals with the highest breeding values to select for producing the next generation. Selective breeding programs are being increasingly utilized for aquaculture species and have been shown to be highly effective in improving production traits, especially growth. Genomic selection consistently outperforms family-based selection based on pedigree only, leading to cumulative genetic gains over generations that incrementally enhance the performance of farmed species.

One of the main reasons underlying the slow uptake of genomic selection in aquaculture is the cost of genotyping [process of determining differences in the genetic make-up of an individual]. Genotyping usually relies on high-density, single-nucleotide polymorphism [SNP; a substitution of a single nucleotide (building block) at a specific position in the genome (all genetic material of an organism) that is present in a sufficiently large fraction of the population] array platforms, which can be prohibitively expensive for routine application for most aquaculture breeding programs, due to the need to genotype [determine the complete set of genetic material of an organism] thousands of performance tested fish (i.e. the reference population) and the selection candidates.

One avenue to expand the use of genomic selection for smaller-scale, more fragmented aquaculture sectors is to exploit low-density SNP panels for which per-sample genotyping costs can be a fraction of the cost of SNP arrays. Low density genotyping appears to be a promising solution for enabling access to the benefits of genomic selection to a broader range of aquaculture species and sectors. However, the optimal SNP density to use is unclear and may be expected to differ depending on variables like species, population history, and trait of interest.

This article – adapted and summarized from the original publication (Kriaridou C. et al. 2020. Genomic Prediction Using Low Density Marker Panels in Aquaculture: Performance Across Species, Traits, and Genotyping Platforms. Front. Genet. 11:124) – evaluated if those variables affect the performance of low-density SNP panels and determined if an optimal genotyping density can be identified as a practical, broad recommendation for aquaculture breeding programs.

Genotypes [set of heritable genes of an organism which can be passed down from parents to offspring] and phenotypes [observable traits or characteristics of an organism] were obtained from four previously published studies in four different species. These included Atlantic salmon, common carp (Cyprinus carpio), gilthead sea bream (Sparus aurata) and Pacific oyster (Crassostrea gigas). These species had been previously challenged with various pathogens and genotyped and phenotyped into corresponding databases.

From these databases, the utility of low- and medium-density SNP panels (ranging from 100 to 9,000 SNPs) to accurately predict breeding values [the economic worth of an individual’s genotype judged by the average performance of its offspring] was tested and compared in these four aquaculture datasets with the following different characteristics: species, genome size, genotyping platform, family number and size, total population size and target trait.

For detailed information on the experimental design; datasets and phenotypes; quality control and low density SNP panel design; estimation of genetic parameters; and genomic prediction [technique that can predict an animal’s genetic merit based on DNA markers such as single nucleotide polymorphisms (SNP); it can predict how an animal’s progeny will perform before the traits are measured or even right after the birth without needing any other information (such as pedigree)], refer to the original publication.

Genomic selection has clear potential for improving prediction accuracy and genetic gain in aquaculture breeding programs, but the cost of genotyping can be prohibitive for many species and sectors. Therefore, since the price of per sample genotyping is generally associated with SNP density, knowledge of the lowest SNP density at which optimal genetic parameter estimation and genomic prediction can be performed is valuable. It may be expected that the optimal SNP density for genomic prediction would be species, traits and genotyping platform-specific.

In our study, we evaluated genotype and trait datasets from four diverse aquaculture species (Atlantic salmon, common carp, gilthead sea bream, and Pacific oyster), genotyped using different genotyping technologies to search for common patterns of the impact of reducing SNP marker density on genomic prediction accuracy. The results were consistent across the different datasets, suggesting that a SNP panel between 1,000 and 2,000 SNPs would be sufficient for near-maximal prediction accuracy for most polygenic traits [traits whose phenotype is influenced by more than one gene] in aquaculture populations. These results and their consistency are encouraging for lower-cost genotyping, and therefore improved affordability of genomic selection across different species and aquaculture sectors.

The uniformity of the results is relatively surprising considering the notable background differences between the four datasets. The trait, genotyping platform, family structure, population size or genome size seem to be relatively unimportant factors for the performance of low-density SNP panels since genomic prediction accuracy trends were consistent across the four species. The large family sizes observed in most aquaculture species might partially explain these results.

The genetic distance [a measure of the genetic divergence between species or between populations within a species, whether the distance measures time from common ancestor or degree of differentiation] between training and validation populations has a large impact on the efficacy of genomic selection [prediction accuracy decreases with increasing genetic distance.

Most aquaculture species are highly fecund, and each pair of animals frequently produces thousands of offspring, meaning that inclusion of multiple full- and half-siblings [half-brother or sister] in training and validation sets is common practice. Consequently, although the accuracy of prediction might decrease in certain situations, we consider that these results are generally applicable to polygenic traits in most aquaculture breeding schemes where close relatives of the selection candidates are routinely phenotyped.

Overall, a consistent pattern of genomic prediction accuracy was observed across species with little or no accuracy reduction until SNP density was reduced below 1,000 SNPs. Below this SNP density, heritability estimates [the degree of variation in a phenotypic trait in a population that is due to genetic variation between individuals in that population] and genomic prediction accuracies tended to be lower and more variable (93 percent of maximum accuracy achieved with 1,000 SNPs, 89 percent with 500 SNPs, and 70 percent with 100 SNPs).

Now that a multitude of studies have highlighted the benefits of genomic over pedigree-based prediction of breeding values in aquaculture species, the results of the current study demonstrate that these benefits can be achieved at lower SNP densities and at lower cost, raising the possibility of a broader application of genetic improvement in smaller and more fragmented aquaculture segments.

Our data show that the patterns of loss of genomic prediction accuracy with reduced density SNP panels are strikingly consistent across datasets of different aquaculture species, despite their differences in population and family structure, phenotype and trait definition and genotyping platform.

These results suggest that SNP densities between 1,000 and 2,000 SNPs will frequently result in selection accuracies very similar to those obtained with high-density genotyping, irrespectively of the specifics of the breeding program design or population structure, assuming the presence of close relatives in the training and validation sets. Further, the higher variance between SNP panel replicates observed with decreasing density suggests that non-random SNP selection can increase the prediction accuracy of low-density panels.

In summary, this study suggests that low-density SNP panels offer a cost-effective solution for broadening the impact of genomic selection in aquaculture, leading to improved enhanced performance of stocks and improved global food security.

A look at aquaculture genomics

Advances in genomics assist aquaculture science by deepening the understanding of adaptation, physiology and quantitative genetics. 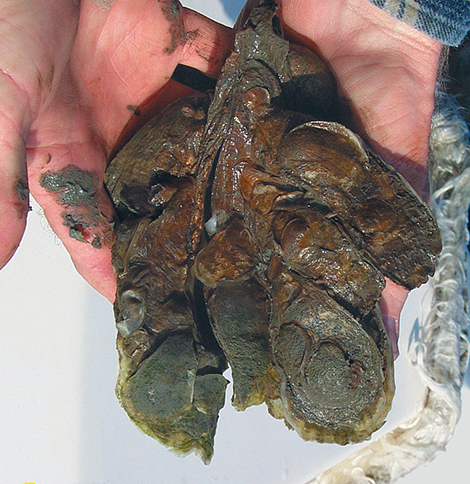 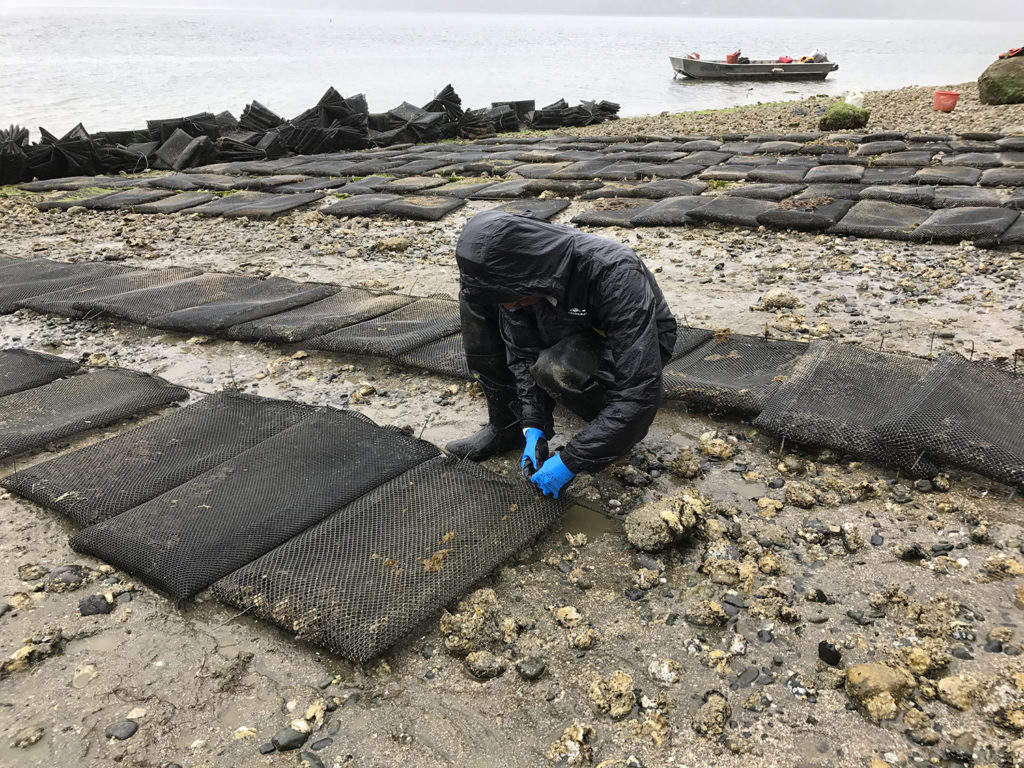 Genetic tool aims to stem the tide of oyster virus

Initially, a new chip loaded with oyster DNA pieces will identify oysters resistant to the herpes virus, but in the future it may be able to identify oysters with other desirable characteristics, such as faster growth rates.