The giant freshwater prawn (Macrobrachium rosenbergii) is a species with great economic value in the global market. China is an important producer, and its 2016 harvest was over 130,000 metric tons (MT), representing more than half of global production. M. rosenbergii is not a native species in China and most cultured populations are from wild broodstock introduced from other Southeast Asia countries, or selected populations with narrow genetic variation. There would be a risk of inbreeding if using these populations over the long term.

Selective breeding could effectively improve the production traits of farmed animals and help the animals adapt to local conditions. In aquaculture, selective breeding has been used with great success to improve growth, disease resistance, or quality traits in several species including Atlantic salmon, rohu carp, Nile tilapia and Pacific white shrimp. There are selective breeding programs for M. rosenbergii in several countries, including China, India and Vietnam.

In China, a selective breeding program aimed at improving harvest body weight (HBW) and pond survival of M. rosenbergii was initiated in 2006. A newly selected line named “Nantaihu No. 2” was approved by the National Certification Committee for Aquatic Varieties of China in 2009. This new line brought remarkable economic and social benefits but implementing a breeding program for M. rosenbergii with a faster growth rate and high pond survival is in urgent demand in China, which led to another selection breeding program initiated in 2015.

In this latest program, M. rosenbergii resources were widely collected from different countries; the molecular pedigrees of founder animals based on microsatellite markers were used in the breeding program, which was successfully applied to avoid inbreeding; and the optimum contribution selection was used to make design crosses to maximize long-term genetic progress and control inbreeding simultaneously. Until now the program has achieved remarkable progress and is still being developed.

This article – adapted and summarized from the original publication  (https://doi.org/10.1371/journal.pone.0218379) – evaluated the harvest body weight (HBW) heritability, the accuracy of the breeding value and the genetic correlations between males and females, as well as the selection responses after applying these improvements. The results provide valuable information for improved breeding of M. rosenbergii, as well as other aquatic animals.

Editor’s note: This article has nine co-authors (see article tags below), but only the affiliation and contact information for the first and corresponding author is listed.

The founder population involved four different strains: The first strain was the progeny of the selected population “Nantaihu No. 2” in China, which was characterized by fast growth and high pond survival. The second strain was commercial larvae from Thailand and characterized by fast growth in the late stages. The last two strains were the progeny of wild populations from Burma and Bengal. All these strains were collected in 2015 and since bred at the Jiangsu Shufeng Prawn Breeding Industry Co., Ltd. A total of 134 prawns (56 females and 78 males) were used to build the base population, G0.

In our study we evaluated the genetic parameters and selection response for the harvest body weight (HBW) of M. rosenbergii after being communally reared for 95 to 109 days. The data were collected from two generations that comprised 25,212 progenies from 150 sires and 198 dams. The residual maximum-likelihood methodology (a statistical form of maximum likelihood estimation that does not base estimates on a maximum likelihood fit of all the information, but as an alternative uses a likelihood function calculated from a transformed set of data) was employed to evaluate the variance components, by fitting an animal model.

The accuracy of estimated breeding values (the value of an animal in a breeding program for a certain trait) increased by 0.38 percent after pedigree reconstruction using microsatellite markers. The estimated heritability, h2 (an estimate of the degree of variation in a phenotypic trait in a population that is due to genetic variation between individuals in the population), for HBW was moderate (0.212 ± 0.049); and the common environmental coefficient, c2  [the effect of a shared environment] was low (0.063 ± 0.017), when all the data were used for the analysis. Within generations, h2 was moderate to high (0.198 ± 0.080 to 0.338 ± 0.049); c2could only be estimated in the first generation, G1, and it was 0.055 ± 0.030.

The average HBW of males was significantly larger than for females and were significantly different at each generation. Males were 53.46 percent heavier than the females in G0 and 19.39 percent heavier in G1 (an average result from both selected and control populations). Previous studies also reported that male M. rosenbergii were much heavier than female prawns. Sexual size dimorphism is a common phenomenon in several crustaceans, includingM. rosenbergii, where the average HBW of males is higher than that of females, which might be because females would allocate lots of energy to ovarian development and incubation. The HBW coefficients of variation (CVs) were 27.54 to 35.40 percent in males and 17.32 to 23.40 percent in females, which were similar to values reported by other researchers.

The HBW heritability of female M. rosenbergii (0.278 ± 0.067) was lower than that of males (0.309 ± 0.067) although there was no significant difference. This is different from previous studies in M. rosenbergii, which was most probably because the male prawns were classified in the genetic analysis, while female prawns did not. In addition, other factors such as behavioral factors, social interactions, and food deprivation might also affect the sexual dimorphism of HBW heritability.

Regarding heritability and common environmental coefficients, after pedigree reconstruction the estimated variance components were very close to the results of the unconstructed pedigree and the accuracy of estimating breeding value has been improved 3.8 percent, probably because there was not enough genetic relationship among founder animals themselves. The pedigree reconstruction is relevant as it would play an important role in avoiding mattings among full-sib individuals.

The heritability for HBW of M. rosenbergii across generations was 0.212 ± 0.049, which was similar to an estimate of 0.22 ± 0.056 in India. However, it was higher than the estimates of 0.14 to 0.15 from Vietnam and 0.11 ± 0.08 from Thailand. A previous selection of M. rosenbergii in China only achieved an HBW heritability estimation of 0.056, which was considered to be caused by low genetic variations of the foundations.

In this study, the base population was composed of four different strains from four different countries (China selected strain, Thailand, Burma and Bengal populations), which allowed for assembling greater genetic variations. The present data supported the opinion that low genetic variations of the foundations led to a low HBW heritability estimation of M.rosenbergii. Additionally, many other factors – like different geographical populations, environmental conditions and statistical models – would also affect the heritability estimates for the species.

In the base population, G0, the common environmental variances could not be successfully estimated, most probably because there were not enough genetic ties among families. Lack of the common environmental coefficient (c2, the effect of a shared environment) led to a higher heritability estimation in G0. The c2 was small but significantly different from zero across generations, which showed that the period of family construction between generations had a certain effect on HBW. Notably, the standard error of heritability and the common environmental coefficient were small, which was possibly because of the large number of testing individuals in each family. An issue that needs to be addressed is that the aquaculture conditions should be standardized annually for more accurate testing and evaluation results.

In the present breeding program, the realized response reached 14.01 percent or 11.52 percent after performing one generation selection, almost two times that of previous breeding programs. The predicted response was also over 10 percent after performing one selection. The obvious genetic progress is likely to benefit from the great genetic variation, which is the most important factor to determine the genetic progress of breeding objectives.

Moreover, the optimum contribution selection method might also play an important role. Selecting and mating parents is quite important for a breeding program. The optimum contribution selection method provides a powerful tool to establish equilibrium between the genetic gains of the next generation and limit the inbreeding rate by restricting the increase in average co-ancestry.

Results from our present breeding program show that increased density in G1 would result in more social interaction, and due to the suppression of growth via social dominance, estimates of realized genetic gain based on least squares mean was a little higher than the estimate based on breeding value and predicted genetic gain. Overall, our results show that the optimal genetic contribution selection can also be used as an effective breeding strategy in aquatic animals. 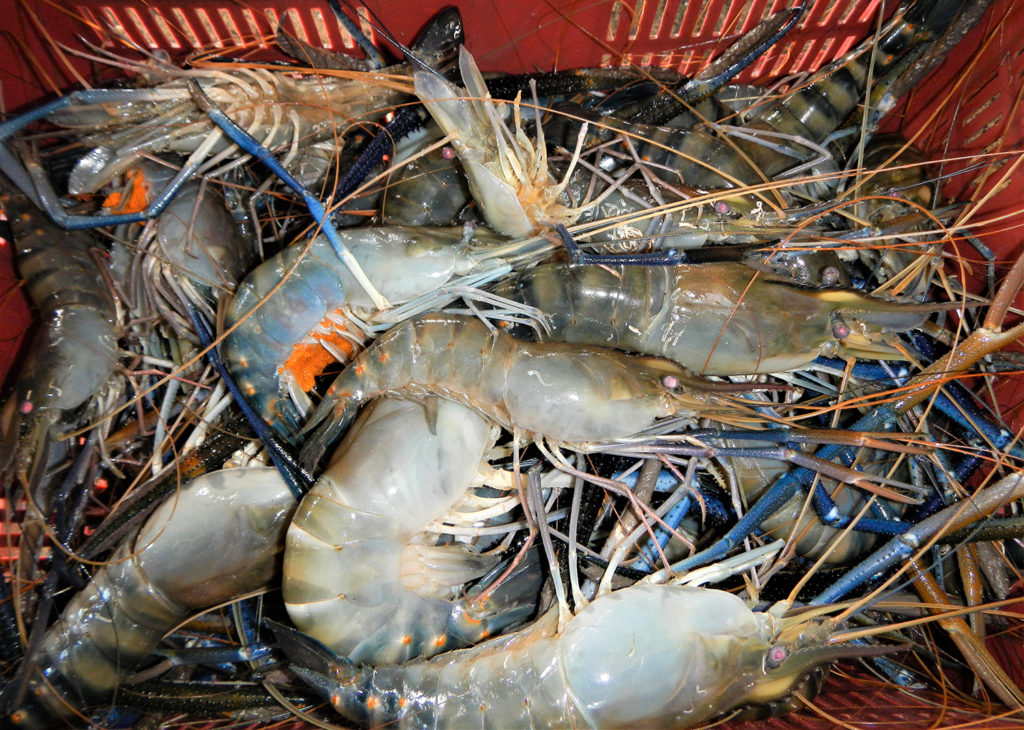 Spoilage in freshwater prawns is endogenous rather than exogenous and results from proteolytic enzymes in the cephalothorax.