If a tree falls in the forest, Arbiom wants to be there to pick it up. The startup, with locations in Durham, N.C., and Paris, France, converts the dried plant matter into a nutrient-rich protein meal called SylPro, and it could soon make waves in aquaculture.

“When a tree falls, it starts to degrade and microorganisms feed off of the nutrients in the wood to accelerate decomposition,” explained business development director Emily Glenn. “Our technology mimics that natural process but much faster at larger scale, converting wood into food for microorganisms that are processed to become a nutritional source of protein for animals.”

Arbiom launched as a research institute in 2011 to explore the possibilities of wood biomass for aquaculture applications. After recognizing the potential of the novel ingredient, the startup turned its focus to bringing a product to market.

As the leader of a $12.6 million collaborative effort called the SYLFEED project, Arbiom works with industrial partners such as newsprint producer Norse Skog Golbey and aquaculture companies Laxa and Skretting Aquaculture Research Center and Icelandic research institute Matis. Each represent stages of the “wood to food” value chain.

“Our technology is based on the goal of improving how we use or valorize wood, as an abundant, renewable, carbon resource that is available in industrial-scale quantities,” Glenn said.

A novel approach to a growing need

The decision to focus on renewable non-food feedstock was based, in part, on growing global protein demands, which are expected to double before 2050. Arbiom believes that converting wood residues into lignocellulosic sugars and lignin and using them as an alternative to fishmeal as a protein source in fish feed is one possible solution.

Unlike other forms of lignocellulosic biomass, including corn and soybeans, wood residues are waste products that can be sourced at low cost without the price fluctuations associated with commodity crops. It also contains nutrients essential to fish health.

“We have good protein content and amino acid profile as well as other components like beta-glucans and mannan-oligosaccharides that are attractive in the feed formulation space,” said animal nutrition director Ricardo Ekmay PhD.

Arbiom launched feeding trials earlier this year. The ingredient is being tested on Atlantic salmon and tilapia at Matis, while researchers at Texas A&M are testing it on hybrid striped bass. Each trial will last up to six months but Arbiom plans to run multiple trials to generate robust data, including information about feed intake, potential digestive issues such as enteritis and intestinal inflammation, reproductive health, stress levels and how well each species utilizes the nutrition source.

In advance of large-scale customer trials, which are scheduled to launch in 2019, Glenn notes that Arbiom is working with several feed companies to understand their needs for the optimal nutrition content and their process for sourcing alternative feed ingredients. The goal, she explained, is for Arbiom to align its product with the internal testing and data needs of companies that will incorporate its novel ingredient.

In addition to producing a nutrient-rich feedstock, Arbiom is also focused on making a product that is sustainable and traceable.

Something like this has always been just around the corner but never quite there.

The feedstock is made from waste products that would otherwise be incinerated. Thanks to the volume of available biomass, achieving commercial-scale production, which would require sourcing enough raw product to produce at least 100,000 tons of SylPro, is possible, according to Ekmay.

As proof of concept, Arbiom plans to build a demonstration plant in France and, to further reduce its carbon footprint, chose a location at the site of a pulp and paper mill. Construction of the plant is expected to get underway later this year.

Sourcing sufficient wood biomass to scale production and meet the demand for alternative protein source won’t be an issue, according to Ekmay. In fact, he believes that Arbiom will eventually open several production facilities, all co-located with mills, to produce feed that is both sustainable and traceable. The startup is working with a third party to do a full life-cycle analysis.

“We like to quip that we can tell you exactly which forest your proteins came from,” he said.

The “end-to-end” traceability also solves another issue in aquaculture: In the European Union, fishmeal derived from farmed fish can’t be used to feed fish of the same species due to concerns about spongiform encephalopathies, degenerative (and fatal) brain disorders.

Although Ekmay is confident that Arbiom will hit its goal of a full-scale commercial rollout in 2020, he admits that creating a new feed ingredient has been challenging, due in part to the research and capital requirements required to bring a new product to market. Interest in alternative feed proteins has kept the team charging forward.

“We’re starting to see very genuine interest and traction within the novel ingredient space,” he said. “Throughout my career [in animal nutrition] something like this has always been just around the corner but never quite there and now we’re very close to a commercial-scale alternative protein becoming a reality.” 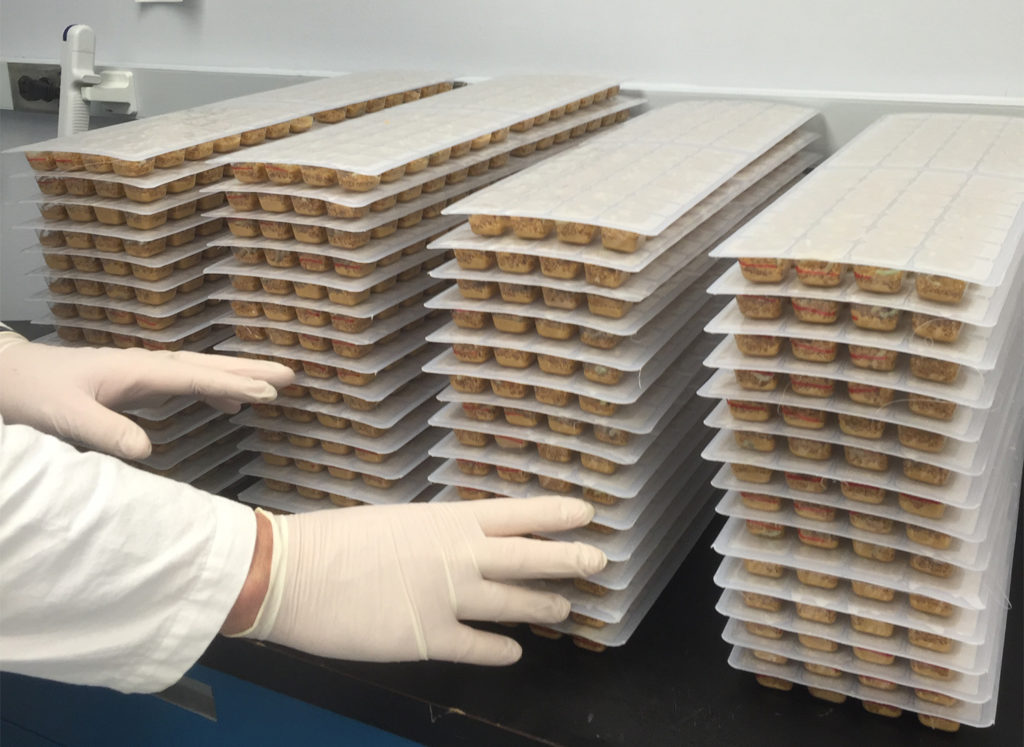