Sea hares are marine gastropod mollusks that may not be familiar to anyone except a handful of medical researchers and marine aquarium enthusiasts. They get their name from the two rabbit-ear-like tentacles, known as rhinophores, on the top of their head and that are used for smell. These slug-like animals are nocturnal, poisonous, plant-eating machines with an internal shell made of protein and no spines or thick skin. Instead, sea hares use poisonous secretions from their skin and can squirt or shoot a cloud of purple ink to deter predators. They are preyed upon by lobsters and crabs, but an attempt by humans to eat sea hares can cause sickness, although sea hare eggs are consumed raw and cooked as a delicacy.

Sea hares feed on a variety of algae and are found in shallow coastal waters of the Pacific and Indian Oceans, with juveniles inhabiting deeper water up to 18 meters. Being hermaphrodites, they form mating circles for reproduction and then lay 80 to 500 million eggs that will hatch in 10 to 12 days after maturing to a brown color a few days before. Free floating larvae then settle on macroalgae after being adrift for 30 days.

There are many other interesting uses for the odd-looking sea hare, other than consuming its eggs, or being used as a maintenance “algae cleaner” for reef aquarists. The purple ink — used long ago for dying clothes by primitive tribes — has been investigated and found to be a very effective in inhibiting many species of gram positive and gram negative bacteria. Moreover, research into its toxicity show the ink to be deleterious to many animals, yet selectively reactive with various types of blood cells in agglutination.

Sea hares possess a large and very simple nervous system, and some species are raised in aquaculture facilities to be used as a model in biomedical research. Most notably in this research field would be the work of Eric Kandel, who was the recipient of the Nobel Peace Prize in Physiology or Medicine in 2000, pioneering the research into the involuntary defensive reflex of this animal with his work beginning in the 1960s. Alternatively, research into behavior and predictive memory increase models employ this sea-slug as well. And perhaps most promising, from the period of 1990 to 2008, over 32 cytotoxic substances were found from a few species of sea hare, with many showing great promise in anti-tumor activity. And lastly, a similar role is filled by this animal for studies in hormonal development.

An 89-gram sea hare was collected from a ball of old coral rubble at Seca Islands, Panama. After a brief acclimation it was stocked into a zero-water-exchange tank inside a greenhouse, located 600 meters above sea level near Boquete, Panama. This animal was identified as a wedge sea hare (Dolabella auricularia) by its flattened, disk-like shape at the posterior end with an exhalent siphon in the middle, and an enclosed mantle cavity that the animal draws water into via an opening in the middle of its back. The wedge sea hare is mottled brown/grey with dark blotches, and at first glance looks like it may have been cut in half at some point in its life. It also has a wide, smooth strip along its ventral side aiding in sliding along as it is a busy feeder during most of the night.

The tank housing the sea hare was operated as a low feed input (6 g/m3/day), full strength, clearwater system with large foam filters and aeration, and contained coral and 80 grams of small reef fish, along with a few hermit crabs and snails. The foam filters performed the function of solids removal, nitrification/denitrification and aeration/mixing. As with all clearwater systems without water exchange containing any measureable nitrogen and phosphorous, the tank had large amounts of hair algae growing on the sides and bottom of the tank.

The sea hare was removed from the tank periodically, weighed and photos taken, with the first sampling data occurring on Sept. 12. It was found to have gained an amazing 4.6 g/day for 26 days with green fecal pellets on the tank bottom and greatly reduced hair algae to show for its efforts. Like many aquatic animals kept in captivity the color was more pale due to lesser diversity in the diet, but the animal appeared very healthy.

By the Oct. 11 sampling date, growth of this animal was halved as its source of food had apparently run out. By Nov. 9, with the feed rate of fish increasing slightly, growth had increased again to 3.4 g/day for 27 days and the sea hare increased in weight to 368 g. By Nov. 29, with a bare tank evident, the sea hare at this point lost 1.7 g/day for 20 days and was moved to another similar set up and run, adjacent tank. Growth resumed at 2.7 g/day for a total of 39 days and at this point weighing nearly a pound at 438 g. With hair algae cropped back to almost nothing, this animal was moved yet again to take part in a coral growth experiment in a tank outside of the greenhouse. Once again growth resumed at 2.1 g/day for 89 days at the next sampling date, when it weighed in at a hefty 624 g.

An important fact to consider is that all this growth was from a “food” that is a pest and considered a waste in a clearwater system, a nuisance to get rid of by marine hobbyists and researchers alike with the only other option available being tedious, physical removal or expensive protein skimmers, and other N and P removal devices.

When comparing the growth of another reported “fastest growing aquatic animal,” information is scant. However, in a document found online one researcher reported that the common grass carp is likely the fastest growing fish in the world as it can grow from a juvenile size of 20 g to a size of 2.25 kg in six months and then 1 kg per month for the next six months and reaching 8.5 kg in one year, ostensibly on plant material alone, likely considered “waste.”

A mathematical model assembled and a growth curve established showed that the grass carp would likely grow at a maximum average of 3.3 percent increase per day from a size of 80 to 228 g in 3 weeks. The best growth period of the sea hare was the first 26 days after stocking, increasing at an average rate of 3.6 percent per day in body weight from 80 to 208 g. So how did this animal wind up accumulating more biomass as daily growth than what was actually added as feed per day?

Most feed pellets are generally 10 percent water as moisture, while the sea hare is about 90 percent water. As nitrogen retention of feed in wild fish is low at about 30 percent, most of the N is wasted and released into the surrounding water. Even lesser amounts of phosphorous are retained. Adequate carbon was provided by CO2 from respiration of fish for algae growth and N was provided at a rate of 0.20 g of N per day (5*0.36*0.16*0.7, or 5 g of feed per day*percent protein*N in protein*N wasted in feed) and the increase of N in the sea hare at 0.14 g (4.6*0.2*0.16, or, 4.6 g of gain of biomass*20 percent protein*16 percent N in protein), so there is obvious ample N in the waste feed to be incorporated by the algae to feed the sea hare. Likely very little denitrification took place and a single pass of N retained in the sea hare was only a small percentage and N was continually recycled through algal growth. Also, there was ample algae before the sea hare was actually put in the tank which explains the high growth rate of the first sampling period.

Another benefit of having sea hares in clear seawater systems, besides their significant ability to crop back algae, is that any N retained in these animals is non-volatile and cannot add to deteriorating water quality as long as the animal is kept alive. This is different from algae and bacteria, which continually degrade and are recycled in zero-water-exchange systems.

The incredible value of keeping clearwater systems free of algae and the super high growth rate, of an animal produced from a nuisance waste product make the sea hare very interesting indeed. 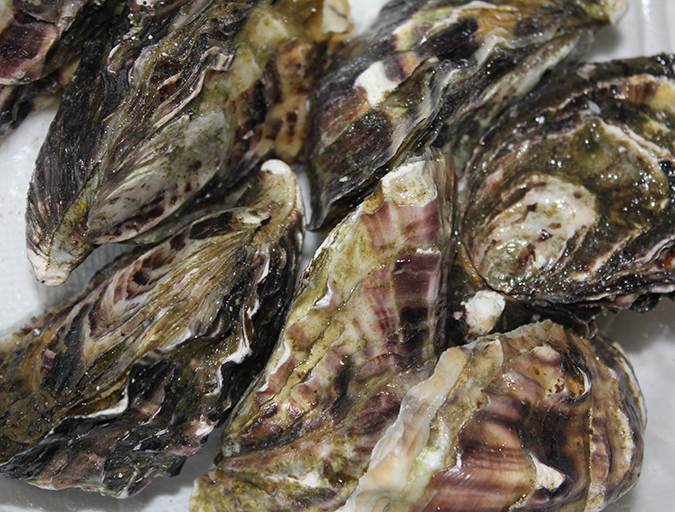 The prevalence of Perkinsus sp. in cultured Pacific oysters and the infection intensity during an annual culture cycle using two detection methods were studied in Sinaloa, Mexico. Pathogen prevalence varied depending on the temperature and the age of the culture.