The diatom Chaetoceros spp. (with around 400 species, probably the largest genus of marine planktonic diatoms) belongs to the class Bacillariophyceae and is characterized by setae (bristles or hair-like structures) at the rectangular ends of a biofrustule, the porous and hard cell wall made mostly of silica. It is normally produced in batch culture using a variety of containers, from carboys to plastic bags to long concrete tanks.

The traditional, large surface area, concrete or plastic, outdoor microalgae tank reactors are relatively inexpensive to build and operate, but have limited production capabilities of only around 300,000 cells/mL at harvest. In addition, in many areas (including arid ones) these outdoor tanks are affected by sandstorms and eolian dust fallout (that can range from 1 to 10 tons / km2 / month) and the potential presence of various animals like fleas and moths can endanger the biosecurity of the systems and enhance disease threats.

In the arid outdoor conditions of desert areas, the high incident light flux (˃ 100,000 lux) can lead to thermal shock, cell bleaching, and poor growth rates and production inconsistencies, resulting in population crashes and heavy carbohydrate release. In comparison, indoor microalgae production can be much more efficient, with controlled, cleaner, vertical tubular culture systems, but these are more expensive because of their need for indoor space, energy, culture media sterilization, procedural upscaling and the requirement for skilled technicians.

Commercial shrimp farming has expanded from the tropics and semi-tropical regions to remote coastal deserts today partly because of the latter’s pristine seawater, uninhabited coastal conditions and the potential for modular biosecure operations. And with competitive, diminishing unit costs for shrimp postlarvae (PL), shrimp seedstock production at reduced costs through small-scale hatchery systems is attractive.

Going back three decades, the cost of algae production was quite higher (about one-third of the shrimp seedstock production costs), when our knowledge of diatom physiology and peak cell density growth was still in its infancy. Scientific advances have paved the way for numerous photo-bioreactor designs available today for the production of diatoms, allowing for improved cell biomass productivity with reduced physical footprint (e.g., biofences, biocoils, serpentines, short columns, tree trunks, pyramids, domes, belt bags, laminar hang-packs, etc.). But the higher capital costs in indoor culture systems is a pressing challenge for commercialization efforts of the technology.

In outdoor microalgal culture, all incident light energy is quickly absorbed in the upper photic zone of the body of water holding the suspended cells. An important challenge then is how to add more light to the large water volumes holding the cell cultures in a cost-effective manner and with a reduced footprint. Our design modifies the simple one of a traditional 30-ton, indoor concrete tank to optimize the efficiency of the light exposure by increasing the light energy available per microalgae cell.

This conceptual advance involves the use of 24 vertically-placed, submerged, fluorescent 40-watt light tubes, fixed in situ with 92 percent transparent acrylic cylinders within the Chaetoceros culture, to ensure a photosynthetically active radiation of 300 to 500 lux within the culture water. Salinity was reduced to under 25 ppt with additions of potable water. The water temperature used in our runs was maintained at a consistent 23o C – to promote higher cell lipidic content and a prolonged logarithmic phase – using a mini-chiller. Aeration was supplied by a bottom, 32-mm piping network.

Carbon dioxide was injected at 0.2 percent (v/v) for higher dry protein content per cell, as 8-mm diameter bubbles that assured a vertical rise-up of whole air cells to break the surface. A tear-drop surface skimmer congregated the extracellular metabolite particulates. As diatoms release extracellular polysaccharides with nitrogen limitation, nutrient dosing was carried out every other day, with actual doses calculated at 50 percent of the culture volume in order to check and control intercellular adhesion and aggregation.

Microalgae cultures were harvested every 72 hours when they reached a cell density of 3.0 x 106 cells/mL, by removing about 67 percent of the total culture volume and replenishing it immediately with an equal volume of pasteurized, filtered (1-micron) seawater with adequate nutrients (f/2) added. The process continues for a 42-day run in the same tank. After 42 days, the tank must be totally emptied, cleaned with 2-ppm EDTA solution and then the walls are cleaned with prepared high saline brine, followed by freshwater rinsing. The culture tank is then refilled with seawater at 23o C and reseeded with leftover partial harvest biomass to a starting cell density of 1.0 million cells/mL. Strict manipulation of this initial cell count represents the best way to manage the amount of light available to the cultured diatoms. Low density operation within early log to mid-log phase culture operation is generally stable when growing Chaetoceros.

According to Dr. (Mrs.) A.P. Carvalho (Universidade Católica Portuguesa), a well-known expert on microalgal bioreactors, “There is no such thing as the best reactor system” and “The most suitable system is situation-dependent.” Our open, indoor tank design with submersed photosynthetic fluorescent lights and operating at low cell densities represents a novel, semi-continuous system for the culture of the diatom C. calcitrans, and is suitable for shrimp hatcheries in coastal desert areas. The diatom cultures are maintained at a selected point on their logarithmic population growth curve by the regulated addition of fresh culture medium.

We have carried out continuous production without any competition from other species, including fouling ones, and have produced more uniform cells than other batch cultures. C. calcitrans cultures in this continuous crop cultivation system store thiamine, α-tocopherol, enzyme inhibitors, allelopathic bacteria, pharmacologically-active compounds like ß-1,3-glucan, as well as photo-protective signature pigments. 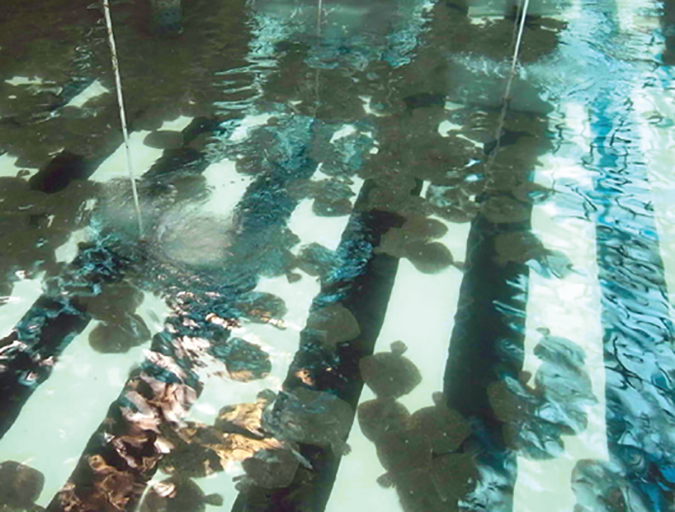