Intensive production of the Pacific or whiteleg shrimp (Litopenaeus vannamei) in Central America and Southeast Asia is estimated at over 3 million metric tons. Despite remarkable progress in shrimp nutrition and feed formulation during the past years, disease outbreaks in shrimp ponds can still lead to farming setbacks and, in some cases, to increased use of antibiotics.

Growing awareness from consumers and producers of aquacultured species is driving demand for responsible and sustainable aquaculture. Regulatory authorities in many seafood exporting countries now focus on the misuse of antibiotic growth promoters (AGP) in aquaculture, while public attention has shifted towards sustainable production methods. Alternative additives are being developed to replace AGPs.

Acidifiers are one of various alternatives spearheading environmental friendly and nutritive-sustainable aquaculture approaches. Currently, the most widely tested organic acid molecule in aquaculture is potassium diformate (KDF, Aquaform®, ADDCON). It has been tested and used successfully in various cultured aquatic species, including salmon, trout, tilapia, Asian and European seabass, and pangasius. Its value to the shrimp production cycle has also been demonstrated in several field and research trials.

Potassium diformate is a double-salt formic acid molecule which decreases gastro-intestinal pH and thereby intensifies release of buffering fluids, containing enzymes, from the hepatopancreas. Formate also diffuses into pathogenic bacteria inside the digestive tract and acidifies their metabolism, leading to bacterial cell death. Furthermore, beneficial bacteria (Lactobacilli, Bifidobacteria) are supported (eubiosis), which may lead to improved gut health, resulting in stronger condition of the shrimp.

One of the most crucial periods in the life cycle of shrimp is the post-larval stage, when shrimp feeding changes from algae and brine shrimp nauplii, to commercially formulated larval diets. Shrimp survival rates during this period are critical to later productivity, but various pathogenic bacteria can significantly increase larval mortality in shrimp hatcheries.

Dr. He and colleagues in China (2006) carried out an experiment to test the use of potassium diformate on L. vannamei postlarvae (average body weight 57 mg) through a formulated diet containing either zero or 0.8 percent potassium diformate (KDF) fed for a period of 40 days. Shrimp larvae fed the diet with KDF had a significantly improved performance in terms of growth, feed conversion and survival rates (Table 1).

Shrimp larvae fed the diet with KDF inclusion showed a more efficient growth and significantly improved feed utilization, as well as lower mortality (P<0.05), compared to control animals, resulting in a markedly increased productivity index, which is a formula including the three most important production figures in shrimp production: weight gain of shrimp, feed efficiency and survival rate. Optimized nutrition in the early stages of the shrimp production cycle often results in an overall improved shrimp productivity, which was also demonstrated in another experiment reported by Jintasataporn et al. (2011).

We carried out another experiment in aquaria to simulate intensive growout and investigate the growth performance of juvenile L. vannamei shrimp fed with low levels of dietary KDF vs. a control diet. For the 10-week experiment, 30 aquaria 120-L each) and connected to a flow-through system, were filled with 20 ppt seawater and 28.0±2.0 degrees-C and > 6.0 ppm of dissolved oxygen. Each aquarium was stocked with 18 shrimp each, with an average body weight of 2.4±0.1 g (n=540). Shrimp were fed to satiation three times a day, with a commercial diet containing 32 percent crude protein. The control diet (treatment A) did not contain KDF, and 0.2 percent and 0.5 percent KDF were added to diets in treatments B and C, respectively.

If the data are analyzed for overall productivity, using the Productivity Index, it shows that the inclusion of dietary KDF resulted in significant improvements of the PI vs. the negative control by more than 19 percent or 24 percent, respectively. We conclude that using our dietary potassium diformate is a promising alternative in modern shrimp nutrition that contributes to an economically and ecologically sustainable growout operation.

Therefore, a subsequent trial was carried out to challenge juvenile L. vannamei shrimp with the bioluminescent, Gram-negative bacterium V. harveyi, which regularly causes increased mortality in shrimp culture. The trial consisted of a negative control compared against two treatment groups (0.2 percent and 0.5 percent dietary KDF, at dosages similar to the ones used in the trial reported above). A total of 90 shrimp (30 shrimp per group), with a mean body weight of 11.0±0.8g, were used. The trial used the same protocols as described above, but with the addition of the pathogenic V. harveyi to the water at the beginning of the 10-day trial at a concentration of 5 × 106 CFU/mL.

At the end of this challenge trial, the mortality in the non-treated shrimp was significantly higher (P<0.01; 76.6±5.8 percent) compared to shrimp fed with the diets with KDF at both inclusion levels (50.0±10.0 percent for both 0.2 percent and 0.5 percent KDF), as shown in Fig. 1. The effect of the acidifier was clear from the first day of the trial, but the difference between treatment and control became more pronounced from day 4 onwards and remained significantly different till the end of the trial. Both dietary KDF dosages reduced the mortality in the challenged shrimp to the same extent by day 10.

We conclude from our research that our dietary potassium diformate can reduce mortality in Pacific white shrimp caused by the Gram-negative, pathogenic bacterium V. harveyi. It may be expected that similar outcomes may result with other Gram-negative bacterial pathogens in commercial shrimp farming operations.

Considering our results on growth performance and survival rates, we believe that potassium diformate is a promising additive for economic and sustainable shrimp production, and should be considered in compound feeds for commercial, outdoor shrimp farming operations. 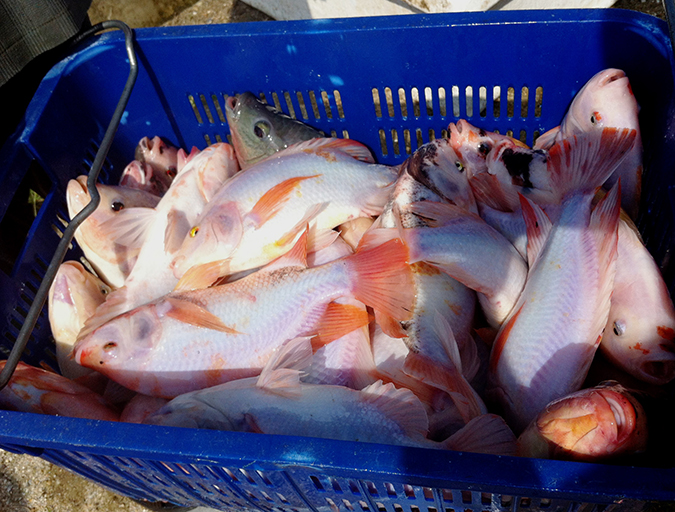 A study conducted in Huila, Colombia, tested the effects of the feed additive potassium diformate on the performance of juvenile tilapia. Results showed an enhanced fish productivity index, lower mortality and improvements in weight gain.