As the aquaculture industry evolves toward improved sustainability and less environmental impact, soybeans have emerged as the most popular alternative feed ingredient to replace limited resources of wild-caught fishmeal and fish oil. The United States soybean industry has made significant investment in research to improve the digestibility and nutritional value of soy for various fish species, testing additives such as taurine in feed formulations, and developing new bean varieties with higher omega-3 and lower oligosaccharide content.

Currently, almost 12 million metric tons (MMT) of soy products are used in aquafeed worldwide, and feed production has grown at an average annual rate of 10 to 11 percent since 1995. With aquaculture output expected to double in a decade, soybean production can be sustainably scaled up to meet rising demand for a consistent supply of high-quality feed ingredients. The U.S. soybean industry recognizes this potential market and is committed to providing scientific and technical support for the growth of sustainable global aquaculture.

At the GOAL 2014 conference last October, there was considerable discussion on the need for the seafood industry to communicate to consumers the sustainability of its products. There is a growing interest among consumers in where and how food is sourced, and if it is produced sustainably. One aspect of that concern, from a small but very vocal contingent, centers on genetically modified organisms (GMOs) in food ingredients.

Unfortunately, there is a loud barrage of misinformation, especially persistent on social media, meant to foment uncertainty and doubt about GMOs among well-meaning consumers. Since many concerned consumers do not have scientific backgrounds or have never met a farmer, let alone have a discussion with one about GMOs, they can be quite susceptible to this kind of fear mongering.

Most soybeans grown globally are genetically modified, and have been for the past 19 years. As feed standards that will apply to various aquaculture sustainability certification schemes are being set, it’s important to reassure consumers that this key aquafeed ingredient is safe and environmentally beneficial.

There is an overwhelming consensus among every major scientific organization in the world as to the safety of GMO crops. The latest European meta-study, released in 2014, evaluated peer-reviewed research studies and found that GMO crops reduced pesticide use, increased yields and increased farmer profits – especially in developing countries.

The few studies, often cited on social media, that have shown supposed deleterious effects of GMOs have all been either roundly discredited as bad science or have never had their results replicated in further studies, which is the basis of scientific consensus.

Still, the anti-GMO themes persist. But Mark Jackson, who grows corn and soybeans in Iowa, USA, on land his great-great-great-grandfather first settled over 120 years ago, has firsthand knowledge of growing GMO seeds for almost 20 years and sees things differently.

Jackson has been active in outreach efforts to educate consumers on sustainable agricultural technology, including giving a TED talk in September 2014 (www.ted.com/watch/ted-institute/ted-unilever/mark-jackson-a-personal-story-about-farming-and-the-future-of-agriculture). TED – short for Technology, Education and Design – is a nonprofit group owned by a non-partisan foundation whose goal is “to make great ideas accessible and spark conversation.”

Why did you choose to grow GMO seeds?
Jackson: Because of the many benefits. We have cleaner water, healthier soil and safer foods. This seed eliminates the use of tremendous amounts of pesticides and herbicides, and allows for conservation tillage, which protects watersheds and enriches the soil. The farmer has been selectively breeding his crops since the beginning of agriculture. Genetic engineering is a process that has been occurring in Mother Nature for years. It’s just sped up in the lab to meet the need to produce more food, faster.

How would you respond to the claim that GMOs poison the soil?
Jackson: In order for any given genetically engineered trait to go to market, it has to go through years of stringent research and be in compliance with the U.S. government’s process of bringing safe food to the table. Each trait has to be cleared through the Environmental Protection Agency, the Food and Drug Administration and the U.S. Department of Agriculture.

People have to have confidence in science-based organizations, not agenda-driven activists. It’s important to separate fact from fiction, and American farmers are dealing with science-based facts.

With GMO seeds, I have larger yields with lower input costs, lower labor costs, less impact on Mother Earth and more carbon sequestration. From my grandfather’s generation to mine, I’ve tripled, and sometimes quadrupled, yields with less input and have had a steady increase in yield production for over 20 years.

This is attributable to healthy soils and better management. If we were poisoning our soil, yields would be going backwards. Like a large number of American farmers, I live on this land and eat the food I produce. We are taking care of what we do, so that we can pass this productive, healthy land along to our children and grandchildren.

What about the claim that GMOs cause much more pesticide use?
Jackson: It’s the opposite – they greatly reduce pesticide use. Original Bt corn (altered to contain a bacterial protein that is poisonous to certain insect pests) uses the same soil bacterium that is widespread throughout the soil. It hits specific bugs that destroy my crop.

We have eliminated hundreds of thousands of pounds of pesticides that we would have had to spray over the crop in order to get the same result. Then we went to the Roundup Ready gene. Roundup, a commercial broad-spectrum systemic herbicide, is one of the least dangerous chemicals I’ve ever worked with. It’s a soap-based chemistry and kills a lot of weeds.

I use less pesticide, and I don’t use more audacious chemicals with a half-life of six months. The half-life of Roundup is just a few days, and it doesn’t persist in the soil. It’s a very benign chemical. Obviously, we have to be careful with good protocols to use any chemical.

How would you respond to the concern about “super weeds” caused by resistance to herbicides and pesticides?
Jackson: With any pesticide or herbicide, management is the key to longevity. Mother Nature has been evolving weeds for centuries, and there were a whole slew of chemical-resistant weeds long before Roundup and other herbicides came along. Eventually, weeds will evolve to resist – it’s the nature of any species of weed.

It’s widely believed that seed companies force farmers to buy these seeds. Is this true?
Jackson: They’re not forcing us to do anything. There are plenty of non-GMO, or heritage, seeds available, but you get less of a yield with those seeds.

Nothing else has ever been adopted as quickly as GMO seeds, which are now at a 90 to 95 percent adoption rate. The other 5 percent uses non-GMO seeds, because there is a market that pays a premium. The farmer has to decide whether the premium is worth the extra work, water and inputs.

The first generation of Roundup Ready seed is off patent now, and you don’t pay a premium for it, and you can save seeds. It just doesn’t produce as much as newer patented generations.

It’s simply good economics to buy seed every year for much better yields. Economics is one of the three legs, along with care for the environment and social justice, of sustainable agriculture. If you can’t get yields that provide a living, it’s not sustainable.

Editor’s Note: The next Soy-Fed Fish News column will detail the Soy Sustainability Assurance Protocol, which provides feed mills and the supply chain with a sustainability certification for U.S.-grown soy. 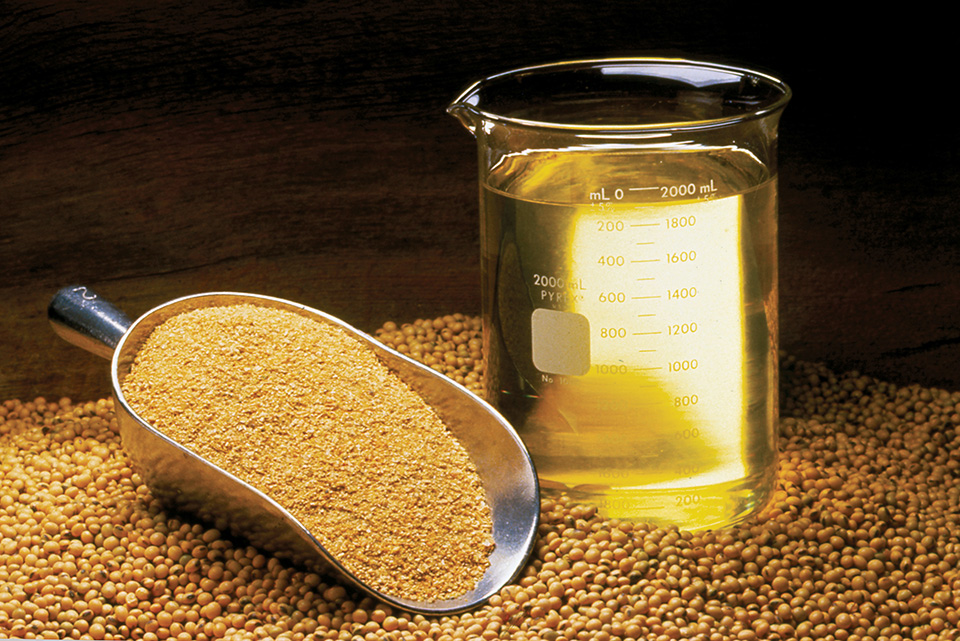 Although today’s soybeans offer many benefits, farmers can also plant alternatives, sometimes on the same farms that raise genetically modified beans. Organic beans meet specific market demands, and a conventionally bred non-GMO bean has been developed for use in aquafeeds for carbohydrate-intolerant marine fish.