Achieving food security in developing nations is a mission of numerous governmental and international organizations. Small-scale aquaculture, both on land and sea, can aid this effort through the consistent production of seafood supplied to a local population within a geographical region.

Nonetheless, culture systems must be built to survive the more energetic environment with stronger wave and current conditions. Submersible cages, in the event of a storm, can be temporarily dropped below the water surface to safeguard the fish product. Once the storm has passed, the cage can be raised to the surface to ease feed and maintenance operations.

The U.S. soybean industry, through its ASA-IM program, initiated the ocean cage aquaculture technologies (OCAT) fish cage system to boost global feed-based production of fish with soy-inclusion feeds. Initial design work was conducted by the Massachusetts Institute of Technology, and four cages were constructed and deployed in the South China Sea, where wooden rafts for fish culture are vulnerable to typhoons.

The advantages of the small-scale OCAT net pens include low cost, low infrastructure demands for cage assembly and minimal vessel requirements for transport and feeding operations. In addition, the necessary mooring components are minimized, and maintenance can be performed via small, family-owned surface vessels.

Sea trials were conducted over a five-year period off the southern coast of Hainan Island to evaluate the capability of the OCAT cages to withstand typhoon storm conditions, and to test pompano production with diets high in soy inclusion. Tests confirmed the ability of the 100-cubic-meter OCAT cages to auto-submerge and withstand typhoon conditions, and produce a minimum of 6.4 metric tons of pompano.

Advancements to the OCAT platform supported by ASA-IM were implemented at the University of New Hampshire offshore aquaculture test site. Dynamic analysis of the cage under waves and currents performed using finite element analysis led to modifications in the high-density polyethylene framework. Scale physical model testing analyzed and optimized the required system buoyancy to minimize the motion of the submersible cage system. Cage assembly enhancements were incorporated and then verified with the construction of two OCAT systems. These systems were tested 14 km from shore in 52 meters of water.

One cage utilized a nylon net and was stocked with steelhead trout (Onchorhynchus mykiss) for submergence trials. Trout are physostomous and need to gulp air to refill their swim bladders. Thus, duration of submergence was investigated for health and survival of the fish. Rim sections were flooded to submerge or filled with compressed air to bring the cage to the surface.

When the cage was submerged 10 m below surface, the 600, 485-gram trout were fed via a plastic hose and hydraulic feeder that delivered pellets to the cage. The cage was submerged for two, four and eight weeks. Results suggested that trout could survive well sub-surface for periods of up to four weeks.

A second sea trial was conducted with a copper alloy net chamber and stocked with Atlantic cod (Gadus morhua). The cage was stocked with 930, 100-gram cod produced in Newington, New Hampshire, USA. Again, fish were fed hydraulically from a vessel for five months with 95 percent survival and a feed-conversion ratio of 1:1.5.

During the cage deployment, no biofouling appeared on the copper net. Proximate analyses conducted on the cod at the completion of the experiment found that copper levels in the livers of the fish in the copper net cage were similar to those of fish raised in a cage with a nylon net.

Another OCAT sea trial was conducted 2 km off the shore of Batumi, Georgia, in the Black Sea. The project was funded by the United States Agency for International Development, ASA-IM and the local company Iberia Pontomarine Aquaculture LLC (IPA). IPA had a 1.2-hectare aquaculture farm that annually produced 5 metric tons of Mitilus galloprovincialis mussels. The company wanted to diversify its production with a fish component for markets in Batumi and Tbilisi. Winter storms and concern of theft warranted the use of a small submersible cage for the site.

The OCAT cage was constructed on a rocky beach in a day and a half. The system was then dragged off the beach and towed to the site with a local vessel. Steelhead trout were chosen for the culture species, as numerous local, land-based trout hatcheries could supply stock for the sea cage.

Several groups of trout averaging 197 grams were stocked into the cage with 94 percent survival. Fish were fed for two months to about 502 grams with a feed-conversion ratio of 1:1.38. Their specific growth rate of 1.56 percent/day was good – until two unexpected storms occurred while the cage was at the surface. The top net was torn, and most of the trout were comprised. Additional trials are currently under way at a closer site that is more accessible for management and maintenance.

The OCAT cage system represents one solution for ocean aquaculture by providing a “backyard approach” to seafood security. This low-tech, low-cost system has proven viable as a fish containment structure for surface and submerged operations, and is ideal for fishermen who struggle in declining wild-catch fisheries.

OCAT is not for everyone, however, as every sea-farming location has its own unique oceanographic parameters, available infrastructure, feed resources and culture species. Aquaculture extension and training will have to be implemented on a regional basis and over a long period of time to assure success. 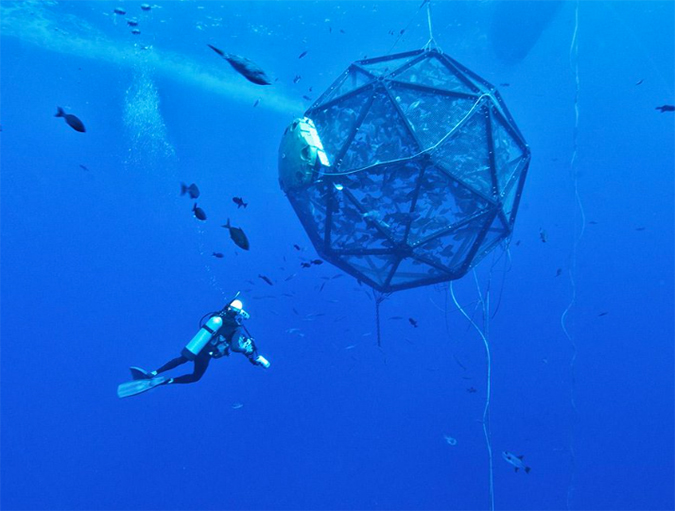 The Ocean Stewards Institute responds to a critical article in The Hill over and argues that offshore aquaculture is the food revolution America needs.