Fishmeal is an essential component of aquaculture feeds. For many commercially raised aquaculture species, fishmeal is considered the primary and required source of protein due to its relatively complete amino acid profile. Most commercial aquaculture diets for finfish contain at least some quantity of fishmeal.

The majority of fishmeal is produced from capture fisheries, predominantly from species such as anchovies, menhaden, sardines and herrings. These pelagic forage species not only provide an excellent source of protein for animal feeds, they are also directly consumed by humans and utilized as bait fish. However, the supply of fishmeal from these species is not endless and the success of these species is a crucial component of the marine web food chain.

Scientists at Mote Marine Laboratory (Sarasota, Florida, USA) worked with local seafood leaders, with funding from the Gulf Coast Community foundation, to utilize an abundant non-traditional species, striped mullet (Mugil cephalus), as a potential source of valuable fishmeal. In 2014, mullet represented the largest commercial fishery by weight in Florida with up to 9 million pounds harvested (over 5 million pounds were harvested in southwest Florida). However, much of the commercial harvest is focused on the roe market, for which ovaries are extracted from females during the spawning season to produce an expensive and highly sought-after product known as bottarga.

Mullet roe represents one of the largest exports from southwest Florida with up to 1 million pounds being removed and shipped overseas. However, since the market value for bottarga is substantially greater than for mullet flesh (fish filet quality is not high value during the spawning season), mullet flesh is either discarded or used as bait. This creates an opportunity to use the otherwise underutilized mullet resource as a potential alternative fishmeal to the predominate forage species described above.

Scientists from Mote Marine Laboratory worked with fishermen to obtain mullet and with a commercial feed company (Zeigler Bros., Inc., Gardners, Pa., USA) to formulate and manufacture mullet- and menhaden-based fishmeal diets; these diets were used to evaluate the efficacy of mullet meal in feeding trials with two valuable aquaculture species.

Throughout the trial, we observed excellent growth, feed conversion ratios (FCRs), condition factors and survival across all feed treatments (Table 1). Statistical analysis revealed no significant difference (p>0.05) in any performance parameters among the three diets.

Juveniles approximately quadrupled in weight after 11 weeks (Fig. 1). FCRs were very similar for fish in all three diet treatments, ranging from 1.2:1 in the menhaden diet, to 1.25:1 in the mullet diet, to 1.35:1 in the standard control diet. Condition factors generally increased through the experimental trial. Mortality was 0 percent in the mullet treatment, 0.3 percent in the menhaden treatment, and 0.5 percent in the standard control diet. In addition, the gut microbiome of sturgeon fed the mullet diet contained higher abundances of beneficial bacteria associated with production of antioxidants, vitamin B12 and antimicrobial effects.

Similar to results in Phase 1, we observed excellent growth, survival and FCRs across all feed treatments (Table 2). Juvenile redfish tripled or quadrupled in weight during the 12-week feed trial (Fig. 2). However, unlike the Phase 1 trial, where all diets performed well with no significant difference in fish production performance, in the Phase 2 trial, the mullet-based fishmeal diet clearly performed better than the menhaden or control diets. Statistical analysis of growth data revealed a highly significant difference in mean wet weight among the three diets (ANOVA procedure, among treatments df=2, F=8.262, p=0.009), and Tukey’s post-hoc procedures revealed the mean weight of the mullet-fed redfish was significantly higher than that of the other two diet treatments.

Table 2. Performance parameters from the Phase 2 feeding trial with redfish. Columns with (*) indicate parameters that are significantly different (p<0.05).

Results from our feed trials clearly indicate that mullet-based fishmeal can be substituted for traditional fishmeal resources and provide an alternative to collection of menhaden or other fishmeal resources. In the Phase 1 trial with a freshwater fish species (Siberian sturgeon), there was no significant difference in fish growth and survival between mullet- and menhaden-based diets or the standard commercial diet. This feed did not impact growth performance or survival during the fingerling phase of sturgeon production.

In the Phase 2 trial with a marine aquaculture species (redfish), the mullet-based fishmeal diet showed even more promise. Fish fed the mullet diet outperformed fish fed the other two diets in terms of growth performance (growth, FCR, etc.) during the fingerling phase of redfish production.

The success of the feed trials is not measured by simply the best growth and performance; the real success is that the mullet-based fishmeal diets performed as well or better than the standard and menhaden-based diets. This study demonstrates the potential to use the mullet-based fishmeal as an alternative fishmeal resource. Hopefully, this will motivate other seafood communities and aquaculture producers to identify potential sources of valuable fishmeal and alternative protein sources. 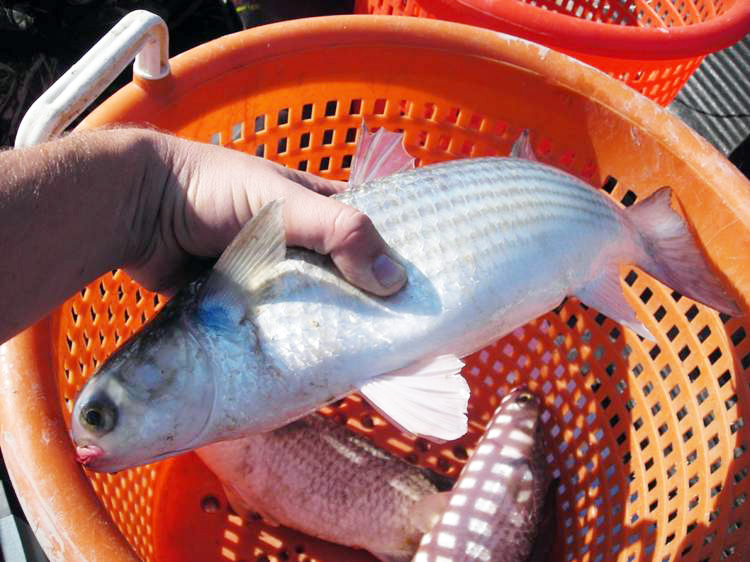