In the past 30 years, over-exploitation of wild sturgeon stocks caused the main sturgeon fisheries – in the Baltic Sea and in the most important production area, the Caspian Sea – to seriously decline. Sturgeons now have the highest proportion of critically endangered species on the International Union for Conservation of Nature (IUCN) Red List.

Strict international and domestic regulations are now in place to prevent further decline, and in 2011 international trade from all the major stocks of sturgeon was suspended. However, illegal fishing and sales activity continues to take place, according to Dr. Harald Rosenthal, president of the World Sturgeon Conservation Society.

As wild sturgeon stocks and caviar production dwindled, global demand for caviar increased, sending prices soaring and paving the way for sturgeon aquaculture to enter the arena. The question now being asked is if the market can keep up with strong farmed caviar production forecasts.

Acipenser baerii, the Siberian sturgeon, is the principal species farmed widely throughout the world. Dr. Jones estimates that around 50 percent of world’s osetra caviar comes from A. baerii.

Other popular osetra caviar species include A. gueldenstadtii, the Russian sturgeon, and A. transmontanus, the White sturgeon, which is mainly farmed in the United States but also in Italy. There is increasing interest in farming the Beluga sturgeon (Huso huso) for its favored beluga caviar.

China farms some A. baerii, but also the native species A. schrenkii, the Amur sturgeon, A. sinensis, the Chinese sturgeon, H. dauicus, the Kaluga sturgeon and hybrids. There is a small production of A. brevirostrum and A. oxyrhynchus on the east coast of Canada. Paddlefish is also farmed for its eggs in a number of countries.

It is expensive to farm sturgeon. Females take five to six years to mature and a lot of time, energy and money goes into building up and maintaining the stock.

Farms have sprung up in Russia, Iran, China, the United States and Europe, and the first few kilograms of farmed caviar appeared on the market in the early 1990s. Sturgeon farms can even be found in South America and Asia, with the most recent entrant to the market being Vietnam. Europe has 51 sturgeon farms in 15 countries. France leads the way with 10 farms, Germany with eight, Italy with six and Bulgaria and Spain with five each.

However, it has taken a couple of decades for fish farmers to develop their expertise and to successfully produce good farmed caviar in commercial quantities.

A word of caution for the sturgeon market

According to Dr. Alan Jones, a former successful sturgeon farmer in France and founder of the European Sturgeon Association, production of farmed caviar is forecast to double from 265 metric tons (MT) in 2015 to 516 MT in 2020. Can the market absorb such an increase?

“When you look at the way the industry is growing, it is quite a success story, but the market is not keeping up with growth in output, and that is starting to cause a bit of a problem in the caviar world,” said Dr. Jones.

“China is starting to produce significant quantities of caviar,” he continued. “The country currently has a small internal market, which means that increasing amounts of this product is finding its way into Europe, the principal market for caviar. This in turn is creating additional pressure on price, and I believe that far greater effort needs to be put into marketing to avoid future issues.”

Dr. Jones believes that caviar should remain a luxury product, and says that if it is devalued through overproduction, then there is no point in producing it.

“It is expensive to farm sturgeon. Females take five to six years to mature and a lot of time, energy and money goes into building up and maintaining the stock,” he said.

The future of the caviar trade will be determined mainly by demand-driven price structures, Dr. Rosenthal argues, with the appearance of a new and evolving mass market in addition to the traditional luxury high-priced market.

Already, there is a large market for imitation caviar, and consumers run the risk of buying or eating poorly crafted surrogates, he said.

“The eggs of 38 species of fish and three species of other animals are used to produce caviar substitutes, as are seaweeds and fish flesh,” said Dr. Rosenthal.

To produce true sturgeon caviar, some farms use hormone injections to stimulate ovulation, then remove the roe through a small repairable incision. This enables the fish to provide further eggs every two years or so throughout its lifetime, which may last decades. However, the majority of sturgeon farmers use non-ovulated eggs still in the ovarian membrane, which means they have to euthanize the fish before egg removal. This is a more traditional method and produces better caviar, according to experts.

“Once removed from the fish, the ovaries are rubbed over a screen to separate eggs from the ovarian tissue. The eggs are then salted to preserve them, with many producers also adding borax to the mix. Ovulated eggs take in water and can burst very easily, and their fragility makes handling much more difficult. My own preference is to use the traditional method,” said Dr. Jones.

Meat byproduct has potential as well

Sturgeon are big fish, typically ranging from seven to 12 feet in length, depending on the species. The most important and expensive fish, H. huso, can grow up to 15 feet long, although the largest one recorded was caught in 1827 in Russia and measured 24 feet in length.

Euthanizing the fish leaves farmers with an issue of what to do with the meat. In 2015, 2,730 MT of meat was sold in Europe and this is predicted to rise to 3,249 MT by 2020. Italy currently accounts for more than half of the volume eaten.

According to Dr. Jones, sturgeon meat can be excellent when it is well prepared. It is a popular dish in and around Bordeaux in Western France, where the Garonne and Dordogne rivers are traditional sturgeon rivers and there is local knowledge of the product.

One company that is successfully growing the market for sturgeon meat alongside their farmed caviar is Acadian Sturgeon & Caviar Inc., based in New Brunswick in Canada.

When you look at the way the industry is growing, it is quite a success story, but the market is not keeping up with growth in output, and that is starting to cause a bit of a problem in the caviar world.

Founder Dr. Cornel Ceapa, who runs the farm with his wife Dorina and son Michael, makes use of every part of the fish.

“We have produced a technical handbook for our fish, showing exactly how we farm it, how we produce our caviar and how every part of the fish can be utilized,” said Dr. Ceapa.

“Everything from nose to tail is sold and our smoked meat and cured skins are particularly popular. We work with chefs to develop new recipes and help them to incorporate sturgeon into their menus.”

Dr. Ceapa is passionate about his sturgeon and caviar, and ships fertilized eggs and larvae for restocking to Poland, Germany, Lithuania, Estonia and Latvia, which border the Baltic Sea, and to sturgeon farms in Europe, Asia and the United States.

“It is really important that we try to rebuild depleted natural stocks, but we have a long way to go to achieve success. In the meantime, there are concerns that some farming operations keep illegally sourced sturgeon as broodstock and offer illegally harvested caviar from wild sturgeon as a product of aquaculture. Whilst it is technically possible to tell the two apart by studying isotope and fatty acid compositions, there is not a standard methodology for doing so,” he said.

Never one to shirk a challenge, Acadian has just acquired 16,000 shortnose sturgeon (A. brevirostrum) and the assets of Breviro Caviar in Charlo, New Brunswick, Canada.

“Sturgeon are my passion and we are working hard to help salvage this failed operation and turn it into another success story. I believe that I can turn it around and produce more really good caviar,” said Dr. Ceapa, who set up a Kickstarter campaign to help fund the new venture.

Dr. Ceappa is acutely aware that he needs to find a market for his newly increased production and recently returned from a sales trip to Europe.

“Europe will be a new market for us, but in the short time we were there we received lots of positive feedback about our caviar and I have high hopes for our meat products too. We compete against many different caviar products, and purchase choices are often price-led. However, I am confident that the quality of our products will win through. That is certainly the case with every chef we have trialled it with,” he said. 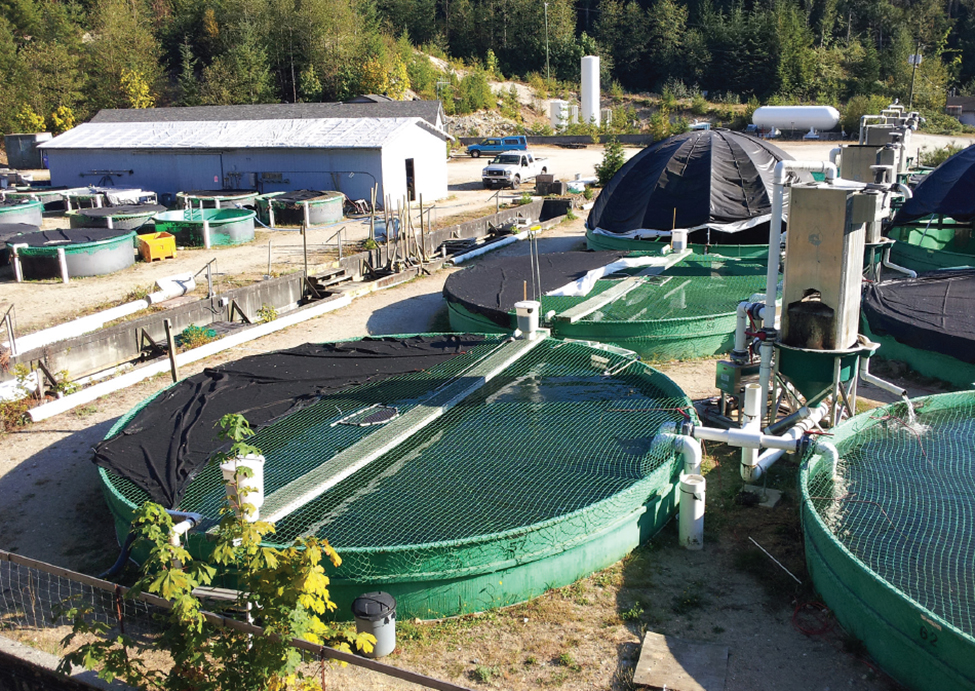 Sturgeon aquaculture in British Columbia: Are we there yet?

Aquaculture of high-value white sturgeon is in its early phases in British Columbia, Canada.  Given the long time required to produce caviar, licensed producers are looking at developing markets for value-added products and byproducts based on sturgeon meat.