Individuals who follow baseball certainly will acknowledge that those players who achieve a batting average of .300 or more, pitchers who achieve an earned run average of 3 or less, or players that steal at least 30 bases a season, plus those who play error-free ball can count on a long and lucrative career in the major leagues. Other sports, such as football/soccer, basketball, hockey or American football have similar standards for outstanding performance, and the high achievers make the big headlines and earn the big salaries, fame and fortune.

Sports and business have much in common in that those businesses that consistently achieve above-average performance are more successful. It is assumed that the same would be true for shrimp farming. If one looks in the business literature or periodicals, it is fairly easy to locate performance standards for most any class of business, but the same cannot be said for shrimp farming.

To help with this, the authors have assembled – both from their experiences and the experience of others – a set of reasonable performance standards for various segments and types of shrimp production facilities producing the most globally prominent marine shrimp species, the Pacific white shrimp (Litopenaeus vannamei).

To be successful, a business simply must have standards of performance in order to annually set realistic objectives, measure results, track success over time and benchmark itself to know where it stands in relation to others in the same business. These performance standards must focus on the most important elements for success. They must be realistic and achievable, and provide for special conditions. Finally, they should be dynamic, adaptable and flexible in order to stretch the company to higher levels of performance.

Worldwide, the shrimp industry tends to achieve less than optimum standards of performance.

Baseball parks around the world are similar in layout, size and construction. Therefore, the baseball standards for high performance previously mentioned apply universally.

The same is not the case for shrimp production facilities, as they vary in size, shape, construction, water quality, soil conditions, temperature, etc. Accordingly, setting performance standards for the shrimp industry is much more challenging, but that is all the more reason why it must be done. A shrimp farm manager needs to know not only how he/she is measuring up to industry averages, but also if and how much his/her performance metrics are improving year after year.

The performance standards presented here for the different types of shrimp production systems are intended to represent levels that should be achievable in well-managed systems. These systems are assumed to be reasonably free of chronic endemic diseases, have access to good-quality water and use appropriate genetic stocks of animals.

Shrimp production systems involve the management of many variables that must be carefully controlled in order to optimize the system. The objectives may be different for an integrated shrimp business as compared to a standalone segment such as postlarvae production or simply a grow-out farm. The focus may be on numbers of shrimp, shrimp biomass, shrimp health or other production parameters. Accordingly, the appropriate performance standards also have to vary. When managing with performance standards, it is important to remember that “more is not necessarily better,” as will be discussed later. For maturation systems, the goal is normally to maximize the number of nauplii produced per female broodstock. This is achieved by maximizing the spawning frequency, as well as the number and hatchability of the eggs produced by the females. However, the performance standards will vary, depending on the feeds used and the genetics of the broodstock.

While nauplii output is maximized by using live polychaetes and fresh bivalves and squid, these foods carry considerable risk of introducing pathogenic Vibrios and possibly early mortality syndrome to the hatchery. Nauplii production is typically lower when live and fresh feeds are replaced with frozen feeds, but the risk of introducing disease is greatly reduced.

For larval-rearing systems, the goal is normally to maximize the rate and efficiency of the production of large, healthy postlarvae (P.L.) that survive and subsequently grow well in ponds or raceways. The parameters that are typically used to evaluate hatchery performance include stocking density, survival rate and the number of days to reach P.L.1. However, producing P.L. at very high densities may not be an optimal strategy if the quality and condition factors of the P.L. decrease. While maximizing P.L. output may maximize short-term profits for the hatchery, there may be a heavy price paid at the farm associated with stocking smaller and weaker postlarvae.

For high-intensity nursery raceways, the goal is normally to produce reasonable numbers of large, healthy animals that exhibit fast growth and excellent survivability after being placed in the grow-out ponds. But in other cases, the goal may be to produce very large numbers of smaller animals, so that more animals are available for stocking into ponds when conditions are proper. This requires different performance standards.

For shrimp grow-out systems, the goal is normally to rear large quantities of shrimp as rapidly as possible, but because a wide variety of production methods and facilities are used, it can be difficult to identify appropriate performance standards. However, growth rate and survival are production parameters that should be maximized, regardless of the production system.

Shrimp growth rate is closely correlated with profitability. Feed rates are typically set based on assumed growth rates and assumed feed-conversion ratios. Therefore, it is important that these parameters are set properly to take advantage of the genetic growth potential of the shrimp. For example, targeting a fixed growth rate of 1.75 g/week can be self-limiting if the animals are genetically capable of growing at a faster rate.

Another way of setting a performance standard for growth rate is to take a fixed percentage of the maximum growth rate expressed by the genetics of the animal. For example, many strains of shrimp used in the industry today are capable of growing 3 g/week during the linear growth phase. Seventy percent of 3.0 g is 2.1 g. Thus, 2.1 g/week growth should be a realistic standard for most grow-out systems using animals with the genetic potential to consistently grow 3 g/week under ideal conditions.

Water temperature is a huge modifier of shrimp performance. During the linear growth phase of shrimp, the growth rate changes approximately 8 percent for each degree Centigrade of temperature change. Careful consideration of the water temperature in the rearing system is crucial for setting an effective performance standard.

Achieving and maintaining continuous improvement requires setting reasonable goals and keeping meticulous records that are analyzed, evaluated and compared with internal and external standards on a regular basis. In sports, the best averages and even world records improve over time. By re-evaluating our goals over time, we can raise the bar, continually improving the productivity and profitability of sustainable shrimp farming. 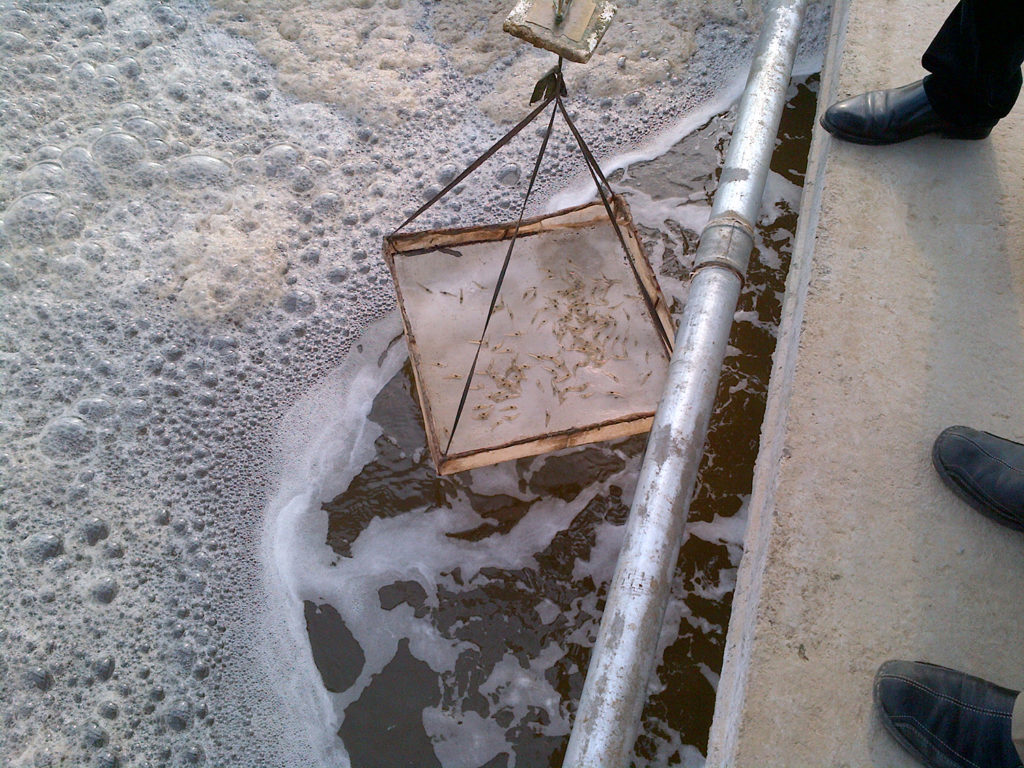