Agriculture is an important source of greenhouse gases (GHG). Estimates indicate that 45 percent of total GHG emissions attributed to agriculture are from animal production. The main sources and types of GHG from livestock are methane from animal’s metabolism and manure management (25 percent), carbon dioxide from land use and its changes (32 percent) and nitrous oxide from manure and slurry management (31 percent).

The quantification of these gases emissions is very important, as they have been significantly inducing changes in average temperature and precipitation, seasonal patterns and frequency of extreme weather events.

Greenhouse gases from aquaculture ponds have been largely neglected so far. Knowledge about GHG emissions from aquaculture systems is important to investors and development planners for mitigation of possible greenhouse effects caused by the aquaculture industry. This information is highly relevant to compare the emissions of GHG from aquaculture with those for the production of others animals, such as cattle and pigs.

Aquaculture might have potential for carbon fixation due to the carbon that accumulates in ponds sediments. Therefore, aquaculture may be an important mechanism for atmospheric carbon sequestration, generating carbon credits. However, to confirm this hypothesis, it is necessary to quantify the fluxes of greenhouse gases during the rearing cycle of aquatic organisms.

Greenhouse gases can be released to the atmosphere in two ways: diffusive emission (emanation) and ebulitive emission (bubbles). In emanation, gases dissolved in water molecularly diffuse from water to the air. Bubbles form naturally in the bottom and go up periodically. In anaerobic conditions, the gas forms methane, whereas in oxygenated bottoms, carbon dioxide dominates. As methane is not consumed by aquatic organisms, it dissipates in the water column.

Gas flow between water and the atmosphere changes by the time of day and can be quite variable. To quantify emission rates, a diffusion chamber can be used. Gas concentrations inside the bubbles formed in pond bottoms can be obtained by capturing bubbles in a flask filled with water on the top of a submerged canvas funnel placed inside water for 24 hours.

The samples should be analyzed through specific gas-chromatographic analysis. Results represent the sum of diffusive and ebulitive emissions, expressed in terms of kg/ha/day. The sum of all gases is presented in an equivalent value for carbon dioxide. The methodology is somewhat complex and unfamiliar to most aquaculture researchers. In addition, the analysis is expensive. Thus, gas emissions are not commonly reported in aquaculture papers.

To quantify the carbon dioxide and methane fluxes in tropical earthen ponds, the authors used freshwater prawn farming managed according to different strategies as a model. An experiment was conducted over 125 days in 12 rectangular earthen-bottom ponds with an area of 0.01 hectares and average depth of 1 meter at the Aquaculture Center of São Paulo State University in Brazil. The ponds were stocked with Amazon river prawn postlarvae at 40 prawns per square meter.

Installed vertically, the substrates were made up of 30-mm nylon screen mesh with a total area equal to 50 percent of the area of the pond bottoms. During the experiment, no water exchange occurred. Pond inflow water was adjusted to compensate for water loss due to seepage and evaporation.

The carbon dioxide and methane released/absorbed by the ponds were measured for diffusive and ebulitive emissions using diffusion chambers and funnels, respectively.

The results indicated that ponds released carbon dioxide and methane to the atmosphere (Figs. 1 and 2). The diffusive emission corresponded to almost 100 percent of the total carbon dioxide emissions. The A.S. treatment released an average 3.3, 2.0 and 1.5 times more carbon dioxide than the A, T and S treatments, respectively (Table 1). Although the data presented great variability, these values may serve as reference for semi-intensive prawn farming in tropical regions.

On average, approximately 1,683 kg carbon dioxide/ha were released during the whole river prawn growout cycle. This value corresponded to 459.58 kg of carbon equivalent. The great variability of night emissions among ponds, especially between those of the same treatment, was expected due to the absorption of this gas in the photosynthesis process throughout the day and its emission during the night in the respiration process. The absorption of carbon dioxide occurred only in ponds using night aeration.

Methane was released in the day and night (Fig. 2), especially by ebulitive means (61 percent, Table 1). The production of methane occurs in pond bottoms under anoxic conditions. Although the concentrations of oxygen in the pond water were maintained above suitable levels, methane was released, likely from deeper layers of sediment. The total mean methane emission was approximately 40 kg/ha/cycle. This value corresponded to 255.13 kg of carbon equivalent. Therefore, the prawn growout ponds released approximately 714.71 kg of carbon equivalent to the atmosphere.

Considering that there are many avenues of input and output for carbon in aquatic systems, studies evaluating the carbon “budget” are needed. Such work could help account for carbon inputs via inlet water, materials and atmosphere, as well as outputs via effluents, animals, sediments, periphyton, seepage and the atmosphere. These studies could indicate if semi-intensive pond farming is efficient in carbon fixation and therefore be helpful in evaluating sustainability. 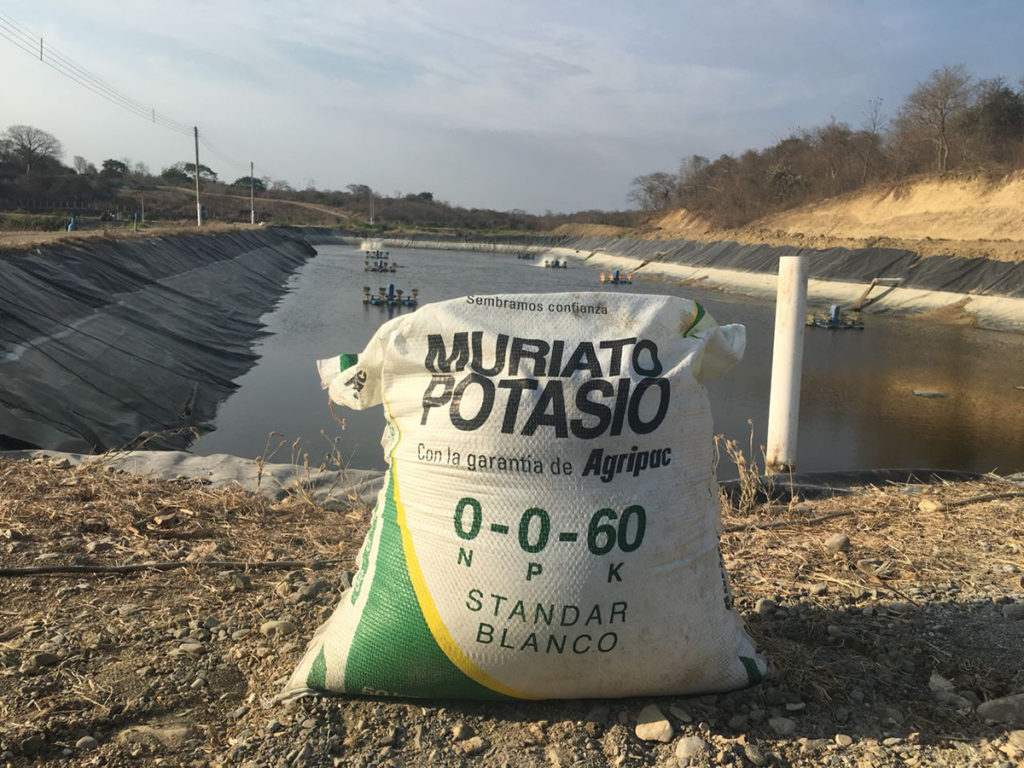