Process a benefit to both aquaculture and livestock feeds

Carcasses and other waste products often present a disposal problem and cost to producers and processors of aquacultured fish and fishery products. However, many waste products can be converted into byproducts that result in financial returns.

Fish silage is the product of autolysis of fish or fish byproducts. At an acid pH, enzymes in fish degrade and liquefy the fish tissues, while bacterial spoilage is minimized by the added acid. Fish silage is prepared either by acid fermentation (acid silage) or anaerobic microbial fermentation (fermented silage). The latter method is preferred because it is relatively cheap and involves simple, artisanal technology.

The sources, combinations, and proportions of the raw materials (fish, carbohydrate, inoculum, salt, and water), coupled with the various conditions of fermentation and storage (pH, incubation temperature, and duration), make it difficult to standardize quality for lactic acid fermentation processes. Extended storage of fish silage may result in a significant reduction in nutritional quality.

The breakdown is mainly of proteins into simpler compounds. However, the proteolysis is not complete, so some simpler proteins remain in the finished fish silage. Typically, 20 percent of the total nitrogen originally present remains undigested in cold-water fish, but up to 50 percent can remain in the case of warm-water fish. The undigested protein is usually found as an insoluble sediment at the bottom of the silage vessel. The nutritive value of the sediment protein is well recognized, but the protein cannot always be resuspended and used as feed.

A level of more than 1 percent fish oil on a dry-matter basis in the final diet of an animal can lead to carcass tainting and impaired performance. The sediment is quite rich in lipids, and its resuspension can increase the lipid content of the silage. Even excessive agitation during the preparation of silage can lead to similar results.

Fish silage has successfully been fed to a variety of terrestrial and aquatic animals, usually as a liquid. Whether acid-preserved or fermented, the silage is a viscous liquid that is bulky and difficult to transport or store. Since silage contains low levels of solids, water removal is difficult and must be accomplished by evaporation.

Dry silage has been experimentally produced by spray or drum drying. Alternatively, liquefied fish silage could be blended with filler materials such as carbohydrates, cereals, and crop residues or byproducts. The resulting mixtures, which would be suitable for drying in conventional dryers, create the option of customizing the nutritional and economic values of the dry product by varying the proportions of the ingredients from which the diet is formulated.

Many studies have demonstrated the value of feed supplementation with silage made from varied fish species. In one study, fish silage was prepared from whole juvenile tilapia by fermentation with Lactobacillus plantarum, molasses, corn flour, or tapioca flour as alternative carbohydrate fermentation substrates. After incubation for seven days, a desirable and stable pH was obtained that did not affect the quality of the silage after 30 days of storage.

Soybean meal was blended with the liquid silage as a filler and oven dried. Various proportions of fish silage and soybean meal resulted in different nutrient compositions for inclusion in feeds for tilapia. The feed pellets had apparent digestibility coefficients for dry matter, protein, and energy of 82.8, 85.4, and 82.8 percent, respectively. The incorporation of dried fish solids at about two-thirds of the ingredient composition had no adverse effect on its acceptance and digestibility.

In another study, mixed-sex tilapia culled as a result of routine husbandry techniques were fermented with L. plantarum and molasses. The resulting silage was blended with soybean meal and found to be an excellent dietary protein supplement for catfish.

Silage has also been made from tilapia-filleting wastes using acid digestion and anaerobic fermentation with L. plantarum and sugar cane molasses. The 429.9 grams per kg crude protein content of the silage provided satisfactory essential amino acids, and the product was considered appropriate for use in balanced fish diets.

Researchers have also tested a lactic-acid silage and sulfuric-acid silage prepared from salmon viscera. Both ensiled products were dried with poultry byproduct meal in a final ratio of 1:1. The nitrogen levels of the dried products were 9 to 11 percent, sufficiently high to be used as the main protein source in dry feeds for salmonids.

Additional research has shown that silage from whole fish heads ensiled with crude pepsin and an antioxidant mixture is useful in the enrichment of artemia nauplii and rotifers, organisms commonly used as live foods at the onset of independent feeding in marine fish larvae prior to weaning to pelleted diets.

When fed to broiler chicks at 5 and 10 percent of their total diet, whole trout fermented with L. plantarum resulted in better feed efficiency than that observed in birds that received no silage. In another study, broilers fed diets with up to 15 percent tuna silage reflected higher dressed and eviscerated carcass weights than birds that did not receive the silage.

Pigs fed fish silage manufactured by the addition of formic acid (85 percent solution) to whole mackerel grew faster than those given no fish silage owing to an improved feed conversion. Carcass measurements did not vary between dietary treatments, but soft, yellow fat was observed in carcasses from pigs given 150 grams of silage per day.

In additional testing, fish-processing wastes ensiled through the addition of mineral acids mixed with straw and molasses were fed to sheep, and the nutrients were used efficiently. The study showed that seafood wastes are potentially valuable to ensile with crop residues for use as feed for ruminants. 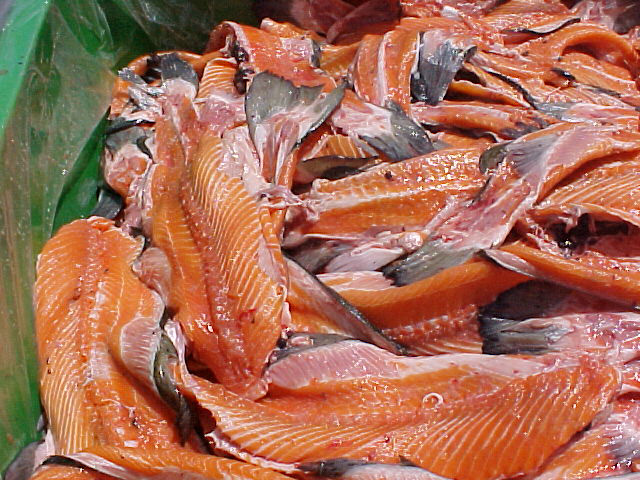 Digestive enzymes in fish can cause post-harvest tissue degradation, an effect that is most pronounced when connective tissue is affected. Some parasites produce enzymes that make seafood appear unsuitable for human consumption. 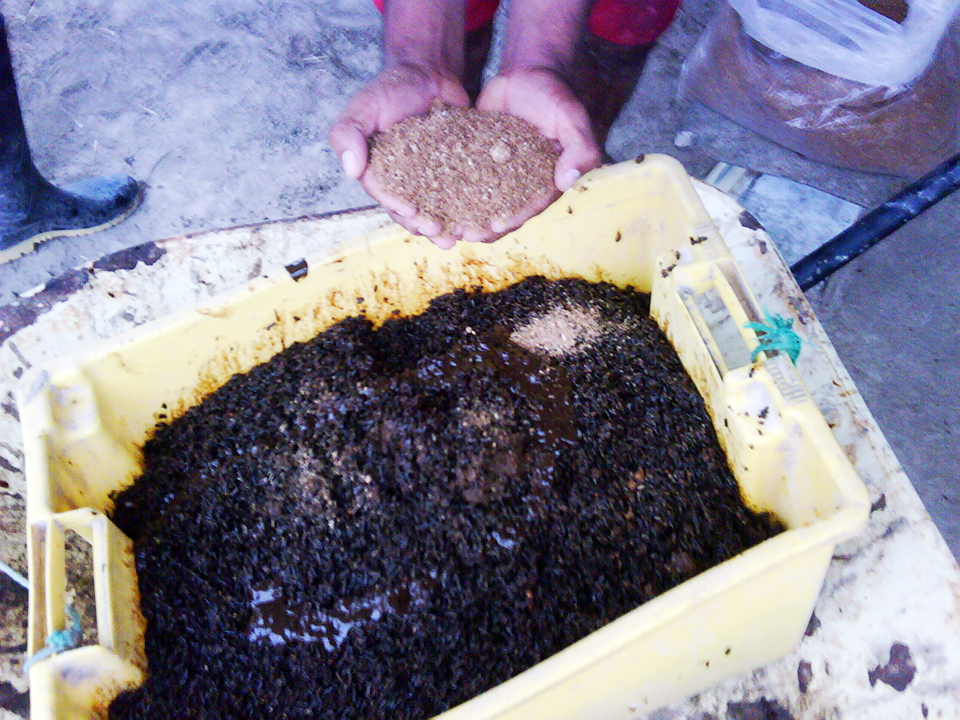 Protein hydrolysates are currently used as partial substitutes for fishmeal in high-quality artificial diets since their inclusion in feeds promotes growth and survival.