For at least the last three decades, one of the main objectives in marine larviculture has been the replacement of live preys, normally rotifers and brine shrimp, by inert formulated diets. The development of high-quality artificial microparticulate diets, the so-called microdiets, may potentially ameliorate water quality and some disease problems, as well as reduce the high cost of live feed production, since rotifers and brine shrimp production and enrichment require considerable space and manpower.

Microdiets have a high and constant nutritional value, are easy to maintain and have lower production costs – factors which have significant implications for the future economic viability of marine fish larvae production.

Although the formulation and manufacturing of microdiets have improved, and several commercial microdiets exist in the market, the use of artificial diets can still lead to poor larval performance compared to that of larvae fed live preys. Successful replacement of live preys has been achieved in only a limited number of fish species.

The fast growth during larval stages is mainly related to muscle protein deposition. The requirements for protein for maximum growth in teleost larval and juvenile stages are nearly twice as high as in older fish. Protein is therefore one of the main components of feeds for fish larvae.

Fishmeal is considered an optimal protein source, for it provides the best amino acid profile for fish requirements. However, several authors have stressed that the solubility and molecular sizes of proteins presented in artificial diets have significant effects on larval performance. Protein hydrolysates have been used as partial substitutes for fishmeal in microdiets to enhance growth, survival and larval development, and reduce the incidence of skeletal deformities, thus improving larval quality in both freshwater and marine fish species.

Different experimental and commercial protein hydrolysates – whose raw materials vary from krill to mussels, and production methods range from silage to fermentation – have been shown to enhance the growth of Atlantic salmon fry and post-smolts, and larvae of carp, gilthead sea bream, halibut and European sea bass.

In the late 1990s, experiments that substituted fishmeal by hydrolysates consisting of short peptide chains of 10 to 20 amino acids or fish hydrolysate consisting of dipeptides and tripeptides in a microdiet fed to European seabass larvae revealed that 20 percent substitution of fishmeal improved growth performance and survival, and reduced the incidence of scoliosis and lower jaw deformities.

The beneficial effects of hydrolysate on larval development might be explained by the specificities of the larval digestive physiology and the ability of larvae to digest peptides. Intact proteins are absorbed two to three times more slowly than hydrolyzed proteins.

In particular, some cytosolic enzymes like peptidases are induced by dietary medium-chain hydrolysates and di- and tripeptides, as well as other indicators of digestive tract development, such as some enzymes from brush border membrane that show an increase of activity, indicating better development of these animals. Recent studies have revealed that the immune system may also be affected by the incorporation of protein hydrolysate into the diet because biologically active peptides with immuno-stimulating and antibacterial properties may be produced during the process of protein hydrolysis.

Protein hydrolysates also act as feed attractants, as they contain digested protein components such as free amino acids and peptides that enhance the palatability and acceptance of the feed. Depending on the final purpose of the inclusion of protein hydrolysates in microdiets, the molecular mass of the main fraction of soluble peptides may vary.

Protein fraction weight between 1,000 and 10,000 Dalton has a positive effect on feeding activity in fish larvae, whereas peptides with lower molecular weight (200 to 2,500 Da) are reported to have beneficial effects in terms of larval growth, survival and activity of the digestive enzymes of the intestine.

Considering that protein compounds are hydrolyzed into peptides and amino acids in the intestine due to the activity of proteolytic enzymes, as well as the fact that di- and tripeptides are easily converted into free amino acids, maintaining the proper balance of the above-mentioned dietary compounds is very important in optimizing the absorption and use of the soluble protein fraction contained in the diet.

In this sense, numerous studies have highlighted that the inclusion of free amino acids in fish diets has a beneficial effect on larval performance, but inclusion above a determinate species-specific threshold can be detrimental to growth and survival. Thus, it is clear that free amino acids and protein hydrolysates can only partially replace the intact protein in fish larvae microdiets.

As a rule of thumb and depending on the results from different nutritional dietary dose-response trials, the level of hydrolysate should not exceed 20 to 30 percent of the total protein level, based on the protein source and technology of hydrolysis, although this value must be refined for each species or group of species.

Diets were tested in a nutritional dose-response experiment that lasted 45 days. Live preys were substituted up to 60 percent with the microdiets during the artemia feeding phase from 15 to 40 days after hatching at 18 degrees-C. The dietary treatments consisted of the standard feeding regime with enriched rotifers and artemia, and five co-feeding regimens differing in the type of protein hydrolysate and level of fishmeal substitution (Table 1).

The protein hydrolysates tested from pig blood and yeast had the same physical and biochemical properties, being soluble in water and showing similar 35 to 36 percent levels of free amino acids and 44 percent di- and tripeptides. In both cases, the average molecular weight of these hydrolysates was about 300 Da.

The effects of commercial protein hydrolysate inclusion in inert diets for gilthead seabream larvae were evaluated in terms of growth, survival and incidence of skeletal deformities. At the end of the trial, no differences in survival and growth performance were detected among larvae fed live prey and those fed different microdiets.

However, results revealed that dietary treatments affected larval quality in the sea bream larvae. Fish fed microdiets containing protein hydrolysates from yeast and pig blood showed the same incidence of skeletal anomalies as those fed enriched rotifers and artemia (10.2 percent). In particular, the incidences of skeletal deformities in fish fed the LV9 and LV12 microdiets were 15.0 and 12.0 percent, respectively, whereas those observed in fish fed the LX9 and LX12 diets were 9.7 and 13.7 percent.

Surprisingly, when comparing microdiets containing similar levels of fishmeal substitution by protein hydrolysates, but differing in the protein source and molecular size of the hydrolysate, the test diets containing yeast and pig blood hydrolysates showed about half the number of deformities as those in fish fed the control formulation.

Such differences in larval quality might be attributed to the different biochemical properties of the hydrolysates, like the high fraction of water-soluble protein, the average weight of the hydrolysate and their high free amino acids content. These parameters might have promoted the harmonic morphogenesis of the larvae and consequently reduced the incidence of skeletal disorders. 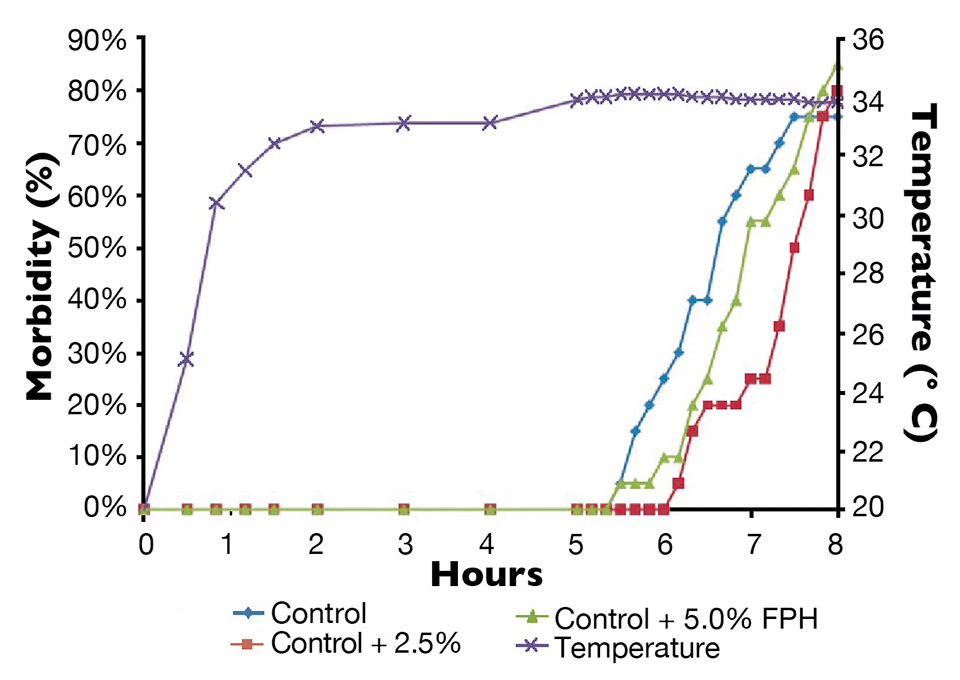