Although current water exchange rates tend to be lower than in the past, most shrimp farms still exchange some water during pond draining and shrimp harvest. This water exchange typically results in the greatest volume of effluents from these facilities. Consider that when a 1-meter-deep pond is drained for harvest, 10,000 cubic meters of effluent are released per pond hectare. For comparison, Table 1 shows the amount of effluent associated with different average water exchange rates during a 120-day grow-out period. At a relatively low water exchange rate of 2 percent, the water volume released is still 2.4 times the volume of the draining effluent, and the difference is 18 times at 15 percent daily exchange.

Although there has been considerable discussion about not exchanging water to minimize the discharge of nutrients and organic matter into natural water bodies, often little thought is given to the water discharged at harvest. Assume that a shrimp farmer lowers water exchange to 2 percent per day as a practice to minimize possible environment effects. The average concentrations of five-day biochemical oxygen demand (BOD5) and total dissolved solids (TSS) – two important water quality variables in pollution control efforts – are about 5 milligrams per liter and 100 milligrams per liter, respectively, in waters of semiintensive ponds. Thus, about 120 kg BOD5 per hectare and 2,400 kg TSS per hectare would be discharged from ponds through water exchange during the typical crop period. Near harvest, BOD5 and TSS concentrations will have increased to about 10 milligrams per liter and 150 milligrams per liter, respectively.

When ponds are drained, effluent will be almost identical in composition to pond water until about 80 percent of pond volume has been released. During final draining to empty the ponds, concentrations of BOD5, TSS and other substances will increase because of sediment resuspension caused by crowding of agitated shrimp, shallow and rapidly flowing water, and harvest activities.

The average BOD5 and TSS concentrations often are about 50milligrams per liter and 1,000 milligrams per liter, respectively, in the final 20 percent of effluent volume. Thus, the load of BOD5 is about 180 kilograms per hectare and the load of  TSS is around 3,200 kilograms per hectare in the final effluent released to empty the pond. The draining effluent contributes more to potential pollution than does water exchange at 2 percent per day.

Table 2. Average concentrations and loads of five-day biochemical oxygen demand (BOD5) and total dissolved solids (TSS) in a typical shrimp farming pond with a water exchange of 2% per day.

Settling basins offer an excellent method for treating effluent released during shrimp harvest, and especially the final, highly concentrated effluent. These basins remove coarse solids (and the considerable BOD5 associated with them) suspended in water during the final phase of pond draining. Studies have shown that 60 to 80 percent of TSS and 15 to 30 percent of BOD5 can be removed in a settling basin with only six to eight hours of water detention time.

Settling basins are simply ponds that detain water long enough for coarse suspended solids to settle to the bottom. These basins should be 1 to 2 meters deep, with water introduced at the surface on one side and discharged from the surface on the other side. The size of the basin depends upon the inflow rate and the detention time necessary for removing coarse solids.

Shrimp farmers may think settling basins require too much space. However, this opinion is not necessarily true. Consider a 500-hectare shrimp farm with 1-meter-deep ponds operated with an average daily water exchange of 2 percent. The daily water exchange volume would be 100,000 cubic meters, and on a day when 20 ha of ponds are completely drained, the effluent volume would increase to only 300,000 cubic meters per day. To provide a detention time of eight hours, a 100,000-cubic-meter settling basin would be necessary. This would require a 1-meter deep settling basin of 10 ha or a 1.5-meter-deep settling basin of 6.67 ha. These areas would be only 2 percent and 1.3 percent of the farm area.

Even if settling basins are constructed in duplicate and with reserve capacity, they still would not require more than 4 to 6 percent of the area of a large farm. Of course, on a small farm, the proportion of farm area devoted to settling would have to be much larger – often 10 to 20 percent of farm area. Nevertheless, settling basins seem to be the only practical means of treating effluents from small or large shrimp farms. 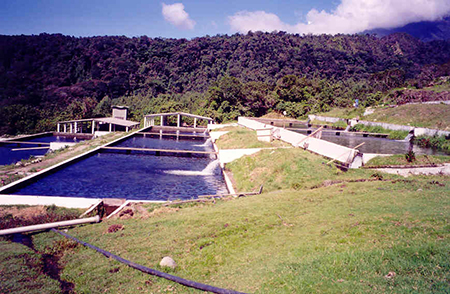 Land and water use issues in aquaculture

It behooves us to understand land and water use issues and understand the differences between aquaculture and traditional agriculture.

In a study, a radial-flow settler provided approximately twice the TSS removal efficiency of a comparable swirl separator.