Fish farmed on diets low in fishmeal and fish oil can have reduced lipid quality in terms of low amounts of omega-3 long chain polyunsaturated fatty acids (LC-PUFAs) like eicosapentaenoic acid (EPA) and docosahexaenoic acid (DHA). Besides potential effects of the reduced omega-3 LC-PUFAs on fish health status, physiological functions and development, the nutritional benefits of these fish for human nutrition could be reduced. Such reduced lipid quality is especially distinctive in carnivorous marine fish that depend on their diet as a source for omega-3 LC-PUFAs.

Suitable fish oil replacements like novel EPA and DHA rich sources, oils rich in functional fatty acids, or strategies improving the efficiency of fish oil utilization need to be investigated. The latter might be realized via feeding strategies like alternate feeding of fish oil and vegetable oil and parental nutritional programming. Another alternative might be the use of functional and bioactive food supplements that interact with the lipid metabolism of fish, protect fatty acids from oxidation, or stimulate the in vivo synthesis of EPA and DHA from alpha-linolenic acid (ALA).

One phytochemical [chemical compounds produced by plants, usually to help them thrive or thwart predators, competitors or pathogens] with potential effects on lipid quality is genistein, a compound found in Leguminosae [the Pea family]. There is good evidence that genistein affects the lipid metabolism in different fish species and alters plasma triglyceride and cholesterol levels as well as overall growth rates. Furthermore, genistein could lead to an improvement of the lipid quality via enhancing the expression of genes involved in fatty acid catabolism and synthesis.

Besides nutritional factors, environmental factors like temperature can influence the lipid metabolism and thus the lipid quality of fish. Several studies have demonstrated that changes in temperature can affect the ratio of saturated to monounsaturated fatty acids and influence the fatty acid synthesis in fish. And one study has shown that low water temperatures led to an increased amount of omega-3 LC-PUFAs in different tissues of European sea bass (Dicentrarchus labrax).

This article – adapted and summarized from the original publication – reports on an experimental trial with sea bream to investigate the effects of holding temperature (19 and 23 degrees-C) and low fish oil diets supplemented with dietary genistein on fish growth; performance parameters; whole body nutrient composition; and fatty acid composition of the whole body, liver and fillet tissue of juvenile gilthead sea bream (Sparus aurata), an important aquaculture species in the Mediterranean region.

The study was conducted at the research facilities of the Grupo de Investigación en Acuicultura (GIA), Universidad de Las Palmas de Gran Canaria (ULPGC), Telde, Las Palmas, Canary Islands, Spain. In order to carry out a simultaneous diet- and temperature-challenge, two experimental setups were used: a flow-through system with 12 tanks for the 23 degrees-C temperature challenge; and four temperature-controlled, small, part-recirculating systems with a total of 12 tanks for the 19 degrees-C temperature challenge.

Juvenile gilthead sea bream (600 fish, offspring from broodstock kept at the GIA-ULPGC, initial body weight: 12.5 ± 2.2 grams) were acclimated in the flow-through system for two weeks. Afterwards, all sea bream were randomly and equally distributed among all 24 tanks of both setups, 25 individuals per tank. During the first week of the experimental period, the part-recirculating systems were continuously cooled down from 23 to 19 degrees-C. During the whole experimental period of eight weeks, feeding of fish until apparent satiation occurred manually three times per day.

Four different isonitrogenous and isoenergetic experimental diets were formulated. All diets were formulated to meet the macronutrient and essential amino acid requirements of gilthead sea bream according to published literature. The diets were reduced in animal protein components (5 percent dry matter, or DM, fishmeal and 7 percent DM blood meal) and consisted mainly of plant protein sources (soy protein concentrate, corn gluten, wheat gluten and rapeseed expeller). The diets only differed in the composition of the oil fraction with varying amounts of fish and vegetable oils.

For detailed information on the experimental design, setup and diets; sampling and data collection; analyses of nutrient composition; lipid extraction and fatty acid composition; and statistical analyses, refer to the original publication.

The specific growth rate, SGR (percentage increase in size per day) was affected by the interaction of all three factors: dietary fish oil level, dietary genistein and holding temperature. SGR was significantly higher when fish were held at 23 degrees-C vs.19 degrees-C, but only slightly increased when fish were fed F6-based diets [Diet F6 served as positive control and had 6 percent dry matter (DM) fish oil and 3 percent DM of vegetable oils (linseed oil, rapeseed oil, and palm oil)] in comparison to the F2-based diets [Diet F2 was the negative control and had a reduced fish oil content of 2 percent DM and 7 percent DM of vegetable oils (linseed and rapeseed oil)]. The gilthead sea bream is a fast-growing warm-water species, and the growth we observed in our study supports it. Our SGR data were comparable to or better than the 1.2 to 1.9 percent per day reported by other studies.

Dietary genistein (G) led to a slightly but significantly increased SGR when fish were held at 23 degrees-C and fed the diet F6 + G in comparison to the diet F6. The daily feed intake (DFI) was significantly higher when the sea bream were held at 23 degrees-C vs.19 degrees-C, irrespective of the dietary treatment. The feed conversion ratio (FCR), protein efficiency ratio (PER, or the weight gain divided by intake of a particular food protein during a test period) and protein productive value (PPV, or the protein gain divided by protein intake) did not differ between the feeding groups nor between the two temperatures.

The higher holding temperature of 23 degrees-C led to significantly lower hepatosomatic index (HSI, the liver weight as a percentage of whole body weight) values and significantly higher Fulton condition factor (FCF, the relationship between the length and weight of a fish, describing its “condition”) values, irrespective of the dietary treatment.

Higher water temperature led to increased feed intake (DFI: 4.1 to 4.3 percent per day) and thus promoted growth (SGR and final body weight, FBW). This was expected and had previously been reported for warm-water species like gilthead sea bream and European sea bass. In contrast, the feed conversion (FCR: 1.7 to 2.2) of all groups was poorer compared to other studies with sea bream of similar size. A systemic effect, namely lost pellets due to the water current in the cylindrical tanks, probably led to an underestimation of the FCR. This also resulted in low PER (0.9 to 1.2) and PPV (14.3 to 19.2 percent) values when compared to the other studies.

The diet formulation did not affect the whole-body nutrient composition significantly. Temperatures exclusively led to differences, which might in return be effects of increased feed intake and better growth rates of fish held at the higher temperature. The elevated lipid content of sea bream held at the higher water temperature is in accordance with similar findings in sea bass. Overall, temperature had the most distinctive effect on the investigated growth performance and nutrient composition.

The fatty acid composition of sea bream usually reflects that of its diet. In our study, the fatty acid composition of sea bream was modified by three factors: dietary fish oil level, dietary genistein and the holding temperature. The reduced dietary fish oil level of 2 percent DM led to decreased EPA, DPA (docosapentaenoic acid), DHA and PUFA levels in all the sea bream tissues we studied. This effect was more pronounced when the sea bream were held at the higher water temperature of 23 degrees-C.

Interestingly, the effect of dietary genistein on the fatty acid composition of sea bream was dependent on the dietary fish oil level and the holding temperature. Furthermore, the different fish tissues reacted differently towards the single stimuli, revealing an interesting insight into approaches targeting an improvement of the fillet lipid quality. Whereas the whole-body fatty acid composition remained largely unaffected by dietary genistein, clear effects of genistein were visible in the fillet and liver tissue. Thus, dietary genistein improved the fillet tissue retention of omega-3 LC-PUFAs in sea bream held at 19 degrees-C and fed diets containing 6 percent DM fish oil.

In the livers of corresponding fish, the same effects were visible, too, although they did not reach statistical significance. This was most likely due to the large variation of the values within one feeding group. In both tissues, the retention was affected by the holding temperature, apparently via reduced growth rates and thus lowered metabolism and consequently fatty acid wash-out in seabream held at the lower temperature. The question on how genistein improved the tissue fatty acid retention remains to be elucidated and can only be hypothesized at this point. It is possible that the antioxidant properties of genistein protected the LC-PUFAs from oxidation in the tissue.

Genistein led to an increase in the amount of EPA + DHA when the sea bream were fed the diet with 6 percent DM fish oil + genistein, but also led to a decrease when the low fish oil diet supplemented with genistein was fed. Such difference in the response of the sea bream to dietary genistein cannot be explained solely by genistein, but seems to depend on the dietary fish oil level, too. It seems likely that the combination of the different modes of action of genistein and the effects of dietary fatty acids on the fatty acid synthesis and tissue composition led to our observed results with sea bream. This was supported by the significant combined effect proven for temperature, dietary fish oil level and dietary genistein on the liver and fillet fatty acid composition.

The use of genistein in diets for juvenile gilthead sea bream had neither a clear beneficial nor a detrimental effect on fish growth performance and whole-body nutrient composition. Whereas the whole-body fatty acid composition was rather affected by the combination of dietary fish oil level and temperature, the liver and fillet tissue fatty acid composition was affected by the combination of all three factors (dietary fish oil level, dietary genistein and temperature).

Furthermore, the dietary fish oil levels – and thus the varying dietary fatty acid compositions – were important for the response of the tissues to genistein. And temperature most likely had an overall effect on the fish via altered growth rates and fatty acid metabolism. 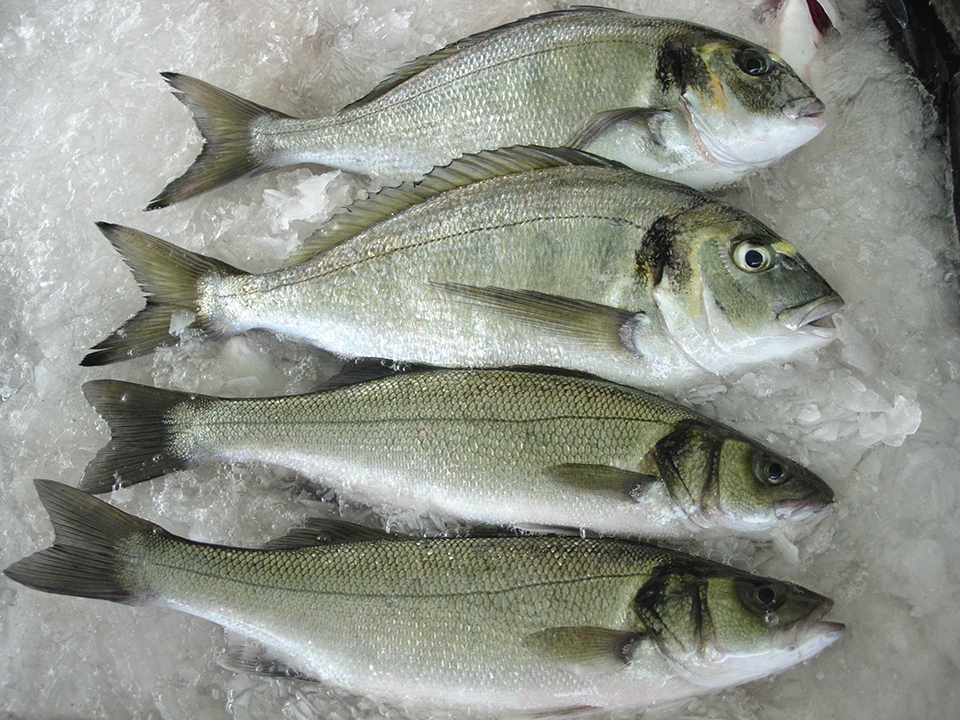 In trials, finishing diets improved the appearance of sea bass and sea bream with equivalent or higher performance than that achieved with standard grow-out diets. 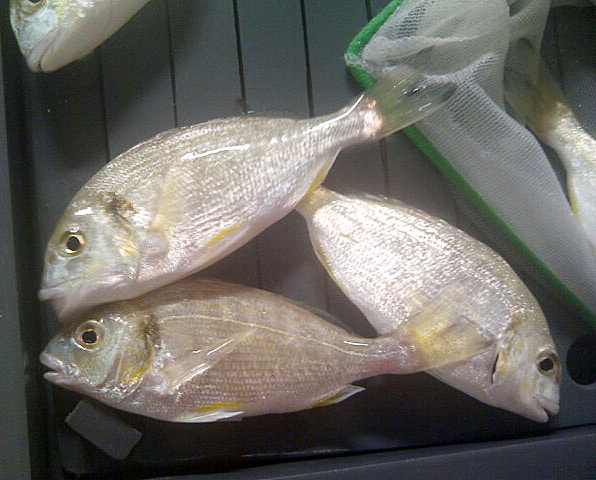 In a study, the performance of gilthead sea bream juveniles fed diets with no fishmeal was compared to that of bream fed diets with 30 or 10 percent fishmeal. 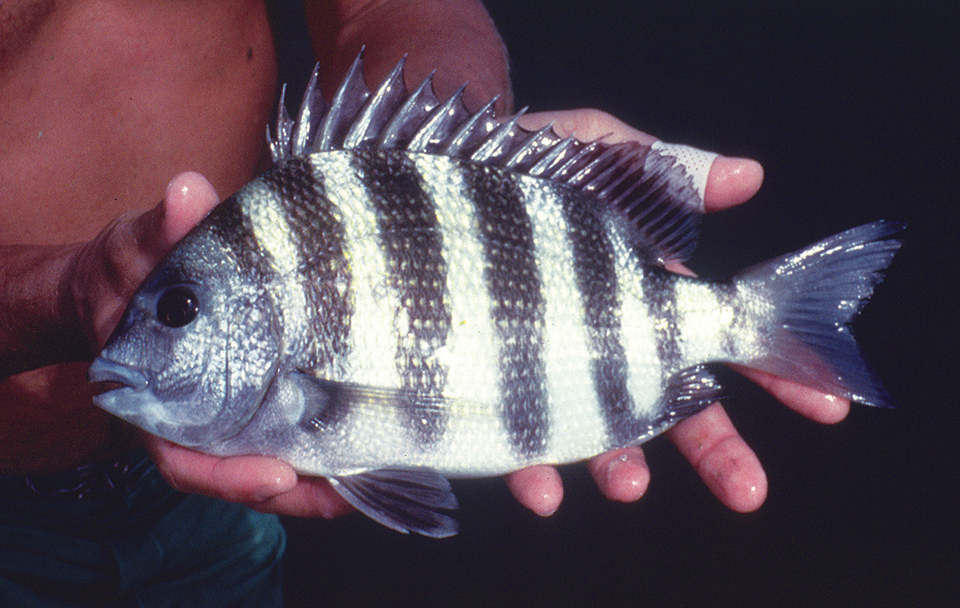 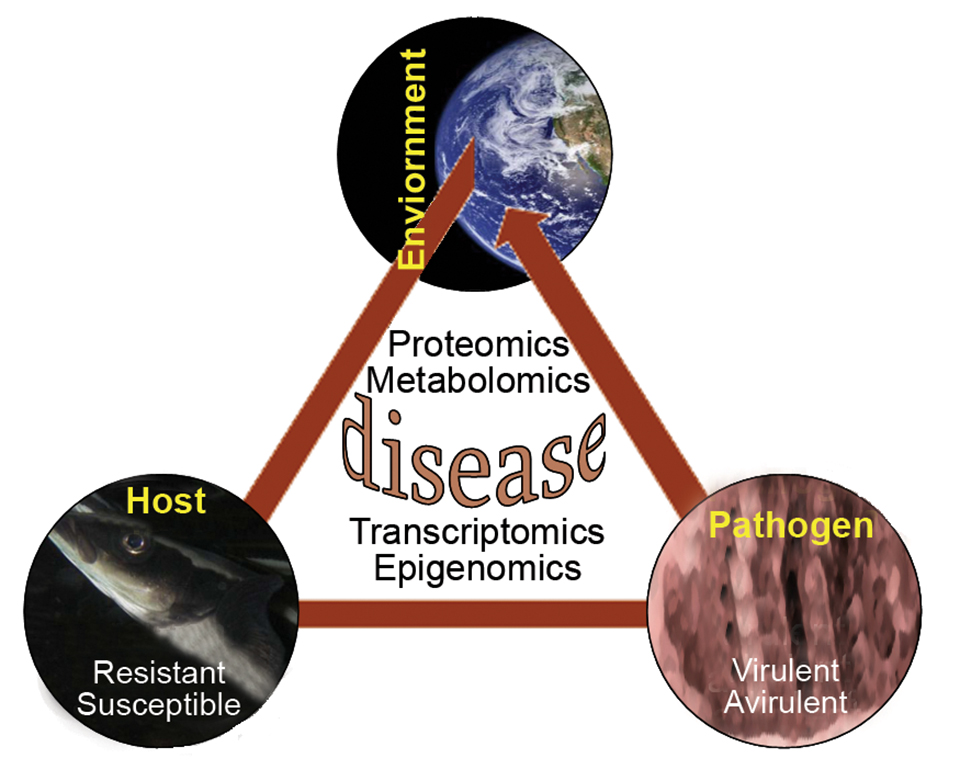