Trial conducted at Xingozinho Dam in the state of Bahia

Tilapia aquaculture is rapidly expanding throughout Brazil, but particularly in the northeast region’s favorable climate conditions. The broad tolerance of tilapia to a range of environmental conditions, their adaptability to different culture systems, and increasing acceptance of the fish by domestic consumers are contributing to the species’ growing popularity.

In northeastern Brazil, rearing of the Chitralada strain of tilapia has predominated due to its strong growth performance even under intensive culture conditions. Practically all types of aquaculture systems are used, from traditional earthen ponds to raceways. However, under intensive conditions, the use of floating cages of less than 12 cubic meters has prevailed, favored by the smaller capital investments required and simplified culture management.

Unlike pond culture, the grow-out and finishing stages of cage rearing feed tilapia extruded feeds with crude protein levels over 30 percent. There is a perception that this feeding strategy supports earlier fish harvests, by three or more weeks. Earlier harvests allow a higher number of crops per year and appear to counter the additional costs of the high-protein diets.

With a trend toward growing tilapia to 900 grams or more, it is critical to identify opportunities that can make cage rearing more cost-competitive in Brazil. The authors recently conducted a trial at the Xingozinho Dam in the state of Bahia, Brazil, to evaluate the growth performance of Chitralada fed with extruded feeds. These feeds included protein levels of 28 percent and 32 percent during the grow-out and finishing phases for fish of 200 grams to 1 kg in floating cages. The study was financially supported by Cargill Nutrição Animal Ltda. in Paulínia, São Paulo, Brazil.

Up to 200 g, all fish were fed under the same feeding program (Table 1). Feeding times and the number of rations per day were kept the same for both treatments over the complete rearing cycle. Extruded feed was always delivered in feeding rings, with rations quantities adjusted weekly after fish weighing.

A total of 30,000 Chitralada fry of 1.3- to 1.7-gram weight were acquired locally. Prior to stocking in cages, the animals were sex reversed in hapa mesh enclosures set up in an earthen pond. The study began by stocking 18,000 animals in three 4-cubic-meter net pens of 5 mm mesh size.

After 40 days of rearing, the tilapia were size graded and transferred to three 4-cubic-meter cages with mesh size of 17 mm under a stocking density of 775 fish per cubic meter. This strategy aimed to homogenize fish size among the stocked population. The early grow-out phase lasted 20 days, after which the fish were graded and stunted animals discarded. In the grow-out and finishing stages, three cages for each treatment were used.

Fish in each net pen or floating cage were counted and weighed weekly to calculate the mean body weight. For each cage, weighing was repeated with a minimum of two new fish samplings. After weighing, animals were returned to their respective pens or cages. A total of 488 fish samplings were conducted during the 207-day study period.

The weekly growth rates of the fish progressively decreased during the rearing cycle from 40 percent in the initial stages to less than 1 percent before harvest (Fig. 1). Fish were harvested after 30 weeks of grow-out with mean body weights of 857 and 991 grams for treatments TR28 and TR32, respectively. Statistical analyses indicated significant differences in fish growth between the feeding treatments (P < 0.05). Tilapia in treatment TR32 showed higher body weight values when compared to treatment TR28.

Data obtained for the first stages of grow-out indicated it is possible to achieve good growth performance for Chitralada even when they are subjected to high stocking densities in clear water conditions. In the early grow-out, feed costs were U.S. $12.16 for producing 1,000 juveniles of 23.4-gram average body weight. In this phase, fish mortality was below 5 percent and feed-conversion ratios were close to 1.0 (Table 2).

During the later grow-out, which had optimum water temperatures of around 29.3 degrees-C, the tilapia grew better when fed the 32 percent protein feed than the 28 percent protein feed (Table 3). Growth performance differences between the treatments were evident when final feed conversion and survival were compared. Under the TR32 treatment, feed costs were U.S. $0.03 per kilogram of harvested fish lower than for the TR28. This reflected savings of U.S. $30 per metric ton (MT) of fish harvested.

Table 3. Growth and feed costs of tilapia over the growout period.

However, up to the 26th week of grow-out, there was only a seven-day fish weight difference between feeding treatments (Figs. 2 and 3). Therefore, for fish up to 750 grams, a lower feed protein level appeared to provide a greater advantage in economical terms.

Feed-conversion values increased during the culture trial period, but particularly after stocked biomass surpassed the 170-kilogram-per-cubic-meter threshold or after tilapia achieved 730 grams in body weight. This may have been due to the limited physical space in the cages or poor environmental conditions. With greater fish biomass, hierarchical fish behavior intensifies and greater amounts of metabolites are excreted. Lower feed access and poorer water quality can result in increased stress to fish. Reducing fish biomass at this stage should improve results.

However, it is possible the detriment in fish growth could be the consequence of a metabolic retraction by Chitralada at this developmental stage. Another possibility is that the greater stress imposed on fish under higher stocking densities could lead to higher energy demands.

Protein in the feed can be allocated as an energy source if energy demands exceed those met by the lipid and carbohydrate sources in the feed. If this occurs, tilapia growth and feed-conversion ratios can be compromised. As such, this could explain the better growth performance delivered by the 32 percent protein feed in fish above 750 grams. 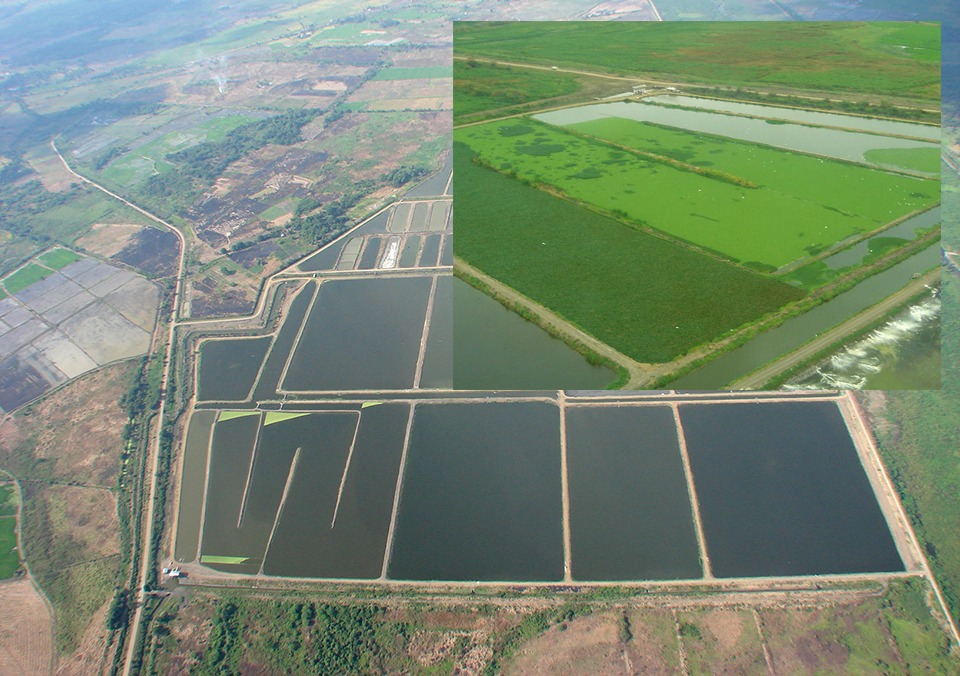 Recirculating systems, where probiotic, hetero­trophic bacteria compete with pathogenic bacteria, can operate without antibiotics to produce tilapia and shrimp.

Much of Brazil’s expanding tilapia aquaculture takes place in floating cages with sturdy frames and nets made from plastic-coated steel or polypropylene.