Federal closures are looming in British Columbia waters, despite a recent survey showing public support and mounting concerns about prices

According to a recent academic survey, most Canadians enjoy eating salmon – 54 percent believe that aquaculture is a sustainable way to produce salmon in Canada. But a new study indicates that many Canadians are “misinformed” about the production methods and are concerned about price.

The researchers aimed to assess how much Canadians know about salmon production and how it might inform their choices. For instance, how might recent events –­ such as the United Nations General Assembly declaring 2022 the International Year of Artisanal Fisheries and Aquaculture or the federal government killing open ocean pens for salmon production in B.C ­– play into their preferences?

The results were interesting: When assessing perceptions on salmon production methods, Canadians preferred to eat farmed salmon raised in an ocean farm over a land-based farm. The finding, which contradicts recent federal government reports and action, leads to questions: If the research shows that Canadians largely support ocean farm production, why then is the federal government taking measures to stop it? And how does the court of public opinion play into policy?

‘A lot of confusion’

On the surface, Canadians overwhelmingly love salmon. The Dalhousie University researchers found that a total of 79 percent of Canadians eat salmon, with 10 percent of respondents consuming salmon weekly.

“There seems to be a lot of confusion around how salmon are raised in ocean farms, but it appears Canadians see them as a very sustainable method of production, in addition to land-based production,” said Dr. Stefanie Colombo, lead researcher for the project and Canada Research Chair in Aquaculture Nutrition at Dalhousie.

Ocean-based production involves salmon being hatched in tanks on land and then moved into pens in the ocean to grow to market size. With land-based farms, salmon are reared entirely in tanks on land. Despite some generational variations – 46 percent of the Gen Z respondents, 44 percent of Millennials and 36 percent of Boomers supported ocean farms – the support for ocean farms cut across age groups.

This finding contradicts a government report released back in 2019 for the Department of Fisheries and Oceans (DFO), which suggested that consumers prefer land-based aquaculture. Moreover, the findings fly in the face of recent Canadian government action: a few months later, the DFO ordered all 19 ocean-based salmon farms in British Columbia’s Discovery Islands to be shuttered by June of this year and declared no more operational licenses would be granted in that area.

When it is passed into legislation, Canada’s first-ever Aquaculture Act will serve as a national legislative framework and will account for regional differences, she added, providing long-term certainty for the sector and improving the sustainable management of aquaculture.

“While the federal government often listens to interest groups, it appears Canadians see ocean farms as a very sustainable method of production, in addition to land-based production,” said Colombo. “Exclusion of ocean net-pen farming in the future eliminates the opportunity for sustainable use of our coastline in appropriate areas for food production. Both production models will both continue to improve and evolve to produce sustainable, nutritious salmon for all Canadians.”

Perceptions of wild versus farmed salmon were also interesting. Almost half of the respondents preferred wild salmon over farmed, and the reasons varied: 62 percent want to eat a product produced in a natural habitat, while 37 percent believe wild salmon lessens risks of contamination and 29 percent believe wild salmon to be more nutritious, even though recent research suggests otherwise. Roughly 23 percent of Canadians prefer wild salmon because they see this method of production as “more sustainable.”

Colombo said the survey results indicate how important science-based data are in shaping opinion. Colombo recommended that the DFO “consider all options based on scientific merit before enticing the industry to embrace one method of production versus another.”

For the salmon farmers in the Discovery Islands, that recommendation comes too late. Dean Dobrinsky, spokesperson for large salmon producer Mowi, notes that the government’s move to significantly reduce the supply of fresh and affordable seafood grown in the Discovery Islands utilizing a production method Canadians clearly support, “defies logic.”

“The Dalhousie survey highlights that our coastlines produce affordable, healthy and sustainable seafoods, which is very important to Canadians,” he said in a statement. “Canadians enjoy eating salmon, and they recognize ocean-raised salmon as a sustainable harvest method.”

Tim Kennedy, executive director of the Canadian Aquaculture Industry Alliance, echoes his sentiments. “Canadians have told us what they want: access to affordable and healthy seafoods, especially salmon grown in the ocean, and easy access to information about the foods they eat,” he told the Advocate. “The Canadian aquaculture sector provides all of this and is very willing and capable of doing more with the support of our government.”

Interestingly, recent government actions could make farmed salmon less affordable for Canadians. The Dalhousie-Caddle survey findings demonstrated a strong correlation between income and the reason Canadians do not consume salmon, with price reportedly an issue for 11 percent of respondents. In contrast, people earning $75,000 a year or more are more likely to eat salmon once a month, or more than people who earn less.

In a nutshell, income is a significant determinant when looking at salmon consumption in Canada, and therefore, speaks to why the method of production matters. Land-based farming is considered by some to be a more expensive method of production for salmon farming, especially since costs are unpredictable.

“If we motivate the industry to produce more salmon using land-based farms, we could potentially make salmon less affordable in the immediate future for a growing number of Canadians,” said Dr. Sylvain Charlebois, director of the Agri-Food Analytics Lab. “Salmon is very much part of Canada’s new Food Guide, so affordability should be a priority.”

Overall, the debate has always been on a low boil in British Columbia, where salmon farms proliferate, as do activists opposed to their presence. Despite strong public support and a decades-long track record of producing healthful food and creating jobs in rural areas, some salmon farmers say aquaculture in western Canada is being unfairly elbowed out of existence, with confusion and politics playing roles.

Yet on the East Coast, the industry seems to operate largely under the radar and has incredible support. In June 2021, the four Atlantic Fisheries and Aquaculture Ministers affirmed their support of aquaculture development at the highest level by renewing the Aquaculture MOU for Atlantic Canada – a move that the Aquaculture Association of Nova Scotia (AANS) said demonstrates “that government recognizes the importance of using science-based evidence to make management decisions in the aquaculture sector.”

Interestingly, a recent public opinion poll indicates that Nova Scotians not only expressed strong support for aquaculture but also seem to have a solid knowledge of the industry operating in their backyard. According to the findings, most Nova Scotians had heard of aquaculture in Nova Scotia and described it as a year-round seafood farming industry. In terms of what kinds of fish, shellfish, and marine plants are farmed, Nova Scotians knew that salmon, mussels, oysters, and trout are farmed in the province and considered aquaculture to have positive impacts on the economy, employment, and sustainability of a food source. Overall, the poll showed “strong support for the provincial government to help the aquaculture industry grow, reflecting the importance Nova Scotians place on the industry.”

The differences between the two coasts are startling, but federalism may partly be to blame. Aquaculture management is controlled by the federal government, except where the authority is delegated to a province or territory under a memorandum of understanding, said Teichman of DFO. British Columbia issues leases for aquaculture sites while DFO issues the license under the Fisheries Act and monitors license conditions. In most other provinces and territories, including Nova Scotia, provincial authorities issue the lease and the license under provincial legislation, while DFO monitors aquaculture sites to ensure consistent protection of fish and fish habitat. With local politics playing a role in shaping policy, what happens on one coast can be vastly different from the other.

Canadians have told us what they want: access to affordable and healthy seafoods, especially salmon grown in the ocean, and easy access to information about the foods they eat.

Proof of this “Tale of Two Coasts” can also be seen in the new Seafood Watch ratings. On Dec. 6, the Monterey Bay Aquarium’s influential seafood ratings program updated its ratings for farmed salmon and downgraded British Columbia’s salmon – except for fish certified by the Aquaculture Stewardship Council (ASC) – from a yellow “good alternative” rating to a red “avoid” rating based on pesticide use, sea lice and concerns about disease transmission to wild salmon.

Seafood Watch noted that Atlantic salmon farms in B.C. continue to experience “pathogen and parasite infection, and the cumulative disease pressure they place on wild salmon populations, whose populations are largely vulnerable or endangered, is unknown.”

“In disregarding these and other findings by credible scientists, Seafood Watch’s approach damages their program credibility when compared to the recent Collier-FAIRR report,” the association said in its statement.

The new ratings were, however, favorable for salmon farms in Nova Scotia, which Seafood Watch upgraded to a yellow, or “good alternative” rating as a result of better use of chemicals and good scores with escapes and diseases.

Seafood Watch relied heavily on data supplied by Cooke Aquaculture, whose data indicated no antimicrobial use on Nova Scotia farms in 2020, no use of pesticides since 2016, only 44 fish escapes in the past 10 years and low levels of sea lice. In Nova Scotia there is no mandatory public reporting on sea lice, whereas it is required in British Columbia. 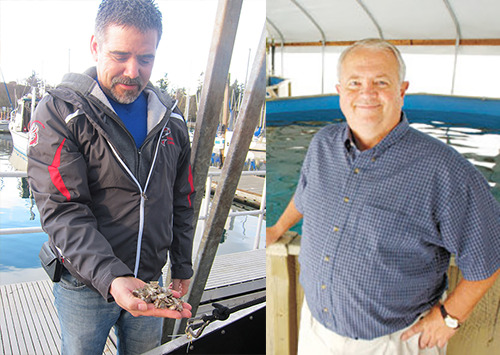 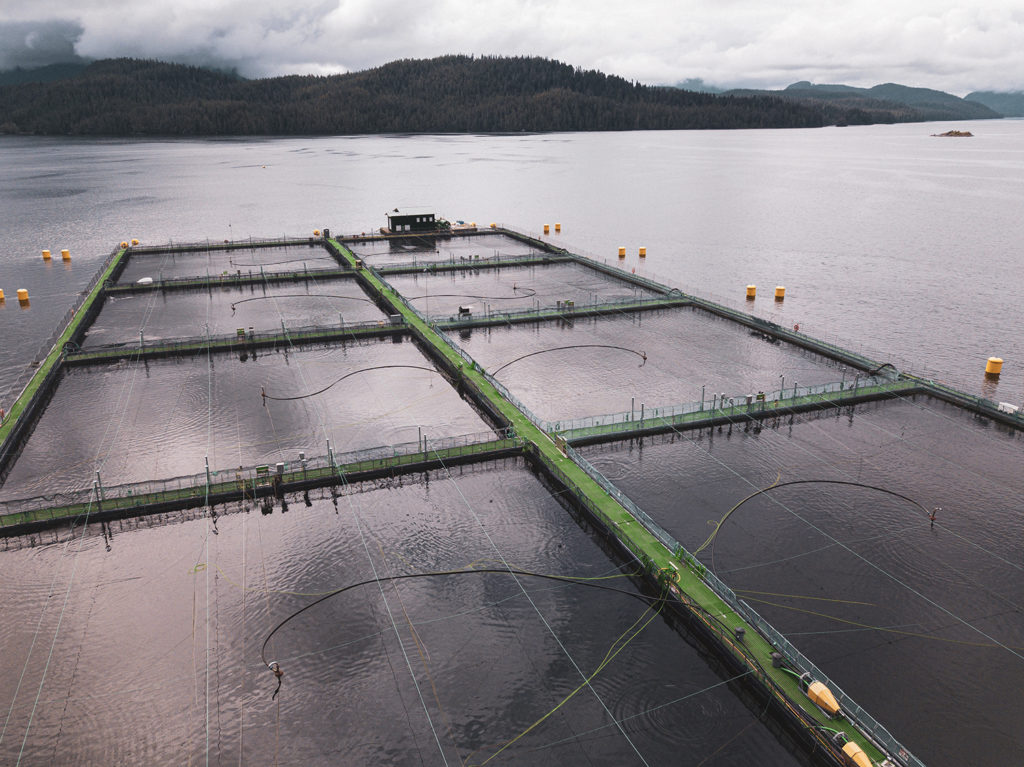