Integrated aquaponic food production systems can produce more food on less land using less water and with a lower environmental impact than conventional food production systems. Adopting a saltwater or brackish water aquaponics system significantly increases the potential animal species that could be raised, many with good market name recognition and demand. Marine aquaponics also reduces the reliance on freshwater resources. Water usage in a marine recirculating aquaculture system can be as low as 16 liters per kg of seafood produced, while usage in freshwater recirculating aquaculture system is approximately 50 liters per kg produced.

Marine and/or brackish water species on average tend to have lower feed conversions and grow faster than freshwater species. Of the potential animal species, the Pacific white shrimp (Litopenaeus vannamei) is a strong candidate for these systems, with rapid growth, tolerance to a wide salinity range and stocking densities, high market price and strong global demand.

Halophytes (salt-tolerant plants) only represent 2 percent of terrestrial plant species and most of them are not common commodities; however, they have been used for many purposes such as food and forage crops, oilseeds, phytoremediation and medicinal purposes. Red orache (Atriplex hortensis), okahijiki or land seaweed (Salsola komarovii) and minutina (Plantago coronopus) are edible halophytes that possess high nutrient concentrations (protein, amino acids, vitamins, and minerals) and have been successfully raised in marine aquaponics. However, the ratio of subsystem components, which will impact the flow of nutrients and health of subsystem taxa, has not been evaluated in marine aquaponic food production systems.

This article – adapted and summarized from the original publication (Chu, Y-T and P.B. Brown. 2021. Sustainable Marine Aquaponics: Effects of Shrimp to Plant Ratios and C/N Ratios. Front. Mar. Sci., 07 December 2021) – reports on a study to evaluate critical ratios of crop density in aquaculture and hydroponics subsystems and provide operational guidelines for marine aquaponics. Specific objectives were to evaluate stocking densities and the C/N ratio on growth and production of L. vannamei shrimp and the three halophytes mentioned above.

Eighteen individual aquaponic systems were built at the Aquaculture Research Lab, Purdue University (IN, U.S.). Each system had an aquaculture tank (113.6 liters), a hydroponic tank (102.2 liters), and a biofilter tank (18.9 liters; Fig. 1).

Before the experiment started, all experimental systems were seeded with a commercial probiotic (Zeigler Brothers, Gardners, PA, U.S.) to manage water quality and the microbial community within every system. No water was discharged or exchanged except for replacement due to evaporation. Sea salt (Instant Ocean®, Blacksburg, VA, United States) was used to adjust the salinity to 15 ppt. A commercial shrimp feed (Zeigler Brothers) was provided twice a day with a total daily amount of 3.0 percent of body weight divided into equal aliquots.

For detailed information on the experimental design, system management and animal husbandry; data collection and analyses, refer to the original publication.

The reduced survival and growth of shrimp at higher stocking densities can be related to several factors, including the availability of space for growth, competition for feed, cannibalism and increased waste excretion leading to degraded water quality. The high survival at high stocking density in this study might be attributed to the application of probiotics and molasses, because probiotics improve the resistance to adverse environments and the ability to tolerate stress.

The use of molasses increased the C/N ratio in the environment, which provided a beneficial environment for probiotics to assimilate nitrogenous waste and compete with pathogens, such as Vibrio spp. The increased C/N ratio also led to the generation of biofloc, which can be a supplementary food for shrimp. Moreover, the application of molasses improved the ability of plants to uptake nutrients from the water column. The combined effect from the application of probiotics and molasses maintained the water quality and led to higher survival in our study, albeit, with reduced growth. It is unclear if the increased density and potential increases in marketable shrimp would offset the slower growth and increased feed costs associated with super-high-density culture, but this possibility needs to be explored.

In general, the growth performance of the three halophytes was better with the increasing stocking ratio and C/N ratio. The nutrient balance is one of the key factors to the success of aquaponics; too few animals (inadequate nitrogen) is limiting to plants, and excessive animal density will result in nitrogen excretion in excess of the plants’ ability to uptake compounds, and may lead to chronic or even acute toxicity to both animals and plants.

In our study, plants benefitted from a higher shrimp stocking density, in which more nutrients are provided for plants. All plants had greater yield in treatment 5:1. A similar trend was also reported by other researchers: the plant production was higher in fish to plant ratio of 1:1, followed by 1:2 and then 1:3. Furthermore, the concentration of macronutrients (N, P, and K) in plant tissues were also higher in both 5:1 treatments than the other stocking density ratio treatments. The higher concentrations of total ammonia nitrogen (TAN), nitrite (NO2–), nitrate (NO3–), and phosphate (PO43–) found in the 5:1 treatment was likely the result of the higher feed inputs into those treatments. The steady increase in NO3–, and PO43– in all treatments may indicate the saturation of plant’s assimilation limits. Further research is needed to evaluate a longer culture duration or a different strategy on plant harvest (sequential stocking) since the concentration of all N- and P-compounds in the water will likely increase after every harvest, which might be a concern for shrimp culture.

While not as pronounced as the effect of shrimp stocking density, the C/N ratio also exerted an impact on plant production characteristics. Additional carbon for amending the growing environment improves nutrient uptake by plants, increases crop yield and alleviates phytotoxicity, caused by trace metals, salinity, pesticides, phytotoxins or allelochemicals. Overall, the effect of C/N ratio on plant growth, yield and mineral nutrient concentrations in plants was relatively minor compared to stocking density.

To manage the water quality well, a robust microbial community is indispensable in aquaponics. Promoting the establishment of microbial flora by inoculation of probiotics or inoculations from mature water, used-biomedia, or biofloc from stabilized systems to new systems are efficient practices. In our study, the concentration of TAN and NO2– remained lower than 0.2 mg/L throughout the experiment, even in the high stocking density treatments. Additional research needs to be conducted examining the frequency of probiotic application and varying harvest scenarios, as after every plant harvest, the TAN and NO2– will likely increase.

Concentrations of TAN and NO2– were higher in the higher C/N treatments while the NO3– concentrations were lower. Similar results have been reported in other studies. The additional organic carbon facilitates growth of heterotrophic bacteria, which compete for nutrients and space inside the biofilm or biomedia with the nitrifying bacteria (NB), which are composed of ammonia-oxidizing bacteria (AOB) and nitrite-oxidizing bacteria (NOB). The rate of reproduction of heterotrophic bacteria is much faster than NB, while the reproduction rate of AOB is faster than NOB. Due to the competition with heterotrophic bacteria, and the slower growth rate of AOB and NOB, the efficiency of nitrification decreases with the increasing C/N ratio, resulting in a decrease in TAN removal rate and NO3– productivity. However, in our study, all nitrogenous waste products remained below concentrations considered toxic.

The concentrations of PO43– continued to accumulate throughout the experiment, similar to previous results, and was higher in the treatments with the higher stocking densities and C/N ratio, likely due to higher feed inputs. Another explanation could be the higher C/N ratios resulted in bioflocs dominated by heterotrophic bacteria and less algae. Moreover, the accumulation of PO43– suggests the saturation of plant’s assimilation ability. PO43–, one of the compounds that causes eutrophication, is an issue for aquaponics; hence, more research is required to improve the management of PO43– in aquaponics and determine how to improve plant’s ability to assimilate PO43–.

In aquaponics, pH is another vital parameter that can be affected by nitrification, nutrient assimilation by plants and heterotrophic bacteria, and carbon dioxide (CO2) excretion by aquatic animals, as well as other factors. The process of nitrification and nitrogenous waste assimilation by bacteria, and CO2 released through the respiration of aquatic animals and microorganisms tends to decrease the pH. Conversely, CO2 removal and nutrient assimilation by plant tends to raise the pH. This may explain why the pH level was lowest at the stocking density of 5:1, followed by 3:1, then 2:1. Also, the lower pH can be another possible reason for a better plant growth in higher stocking density treatments, because nutrient availability increases with the decreasing pH.

Inoculating the water with biofloc and applying probiotics regularly can enhance the management of water quality and the health of shrimp and plants in aquaponics. Although water quality was maintained at safe levels for shrimp and halophytes during the experiment, more studies with a longer period of cultivation are needed for a better understanding of marine aquaponics using these species. 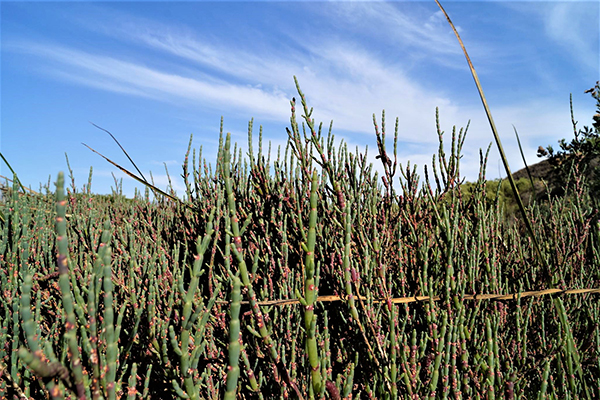 Trial demonstrates that artificial wetlands of Salicornia neei can be used for wastewater treatment in saline aquaculture in South America.