Peracetic acid (PAA) has been identified as an efficacious alternative to common disinfectants used in aquaculture settings to reduce fish pathogen loads. Compared to other aquaculture disinfectants like formalin, PAA is considered relatively environmentally friendly, given that it degrades to acetic acid, oxygen and water when applied in an aqueous environment, and does not leave toxic residues. Additionally, PAA has been shown to be a useful therapeutant in recirculation aquaculture systems (RAS) due to its antimicrobial properties at low doses that, in turn, do not impair biofilter nitrification.

Previous studies have demonstrated the toxicity of peracetic acid to a range of fish pathogens, but little research has been devoted to evaluating the bactericidal effects of PAA on fish pathogens in RAS water. Considering the increasing adoption of RAS technologies in the global aquaculture industry, we sought to characterize in vitro PAA efficacy against three important bacterial fish pathogens in water with representative chemistry profiles of salmonid RAS production. The three selected bacterial pathogens were Yersinia ruckeri, Weissella ceti and Flavobacterium columnare; these pathogens are the causative agents of the diseases Enteric Redmouth disease, Weissellosis and Columnaris respectively. Columnaris and Enteric Redmouth Disease have long been identified as major diseases of fish, while Weissellosis is currently recognized as an important emerging disease in salmonid aquaculture, with outbreaks reported in China, Brazil, the United States, Mexico, Japan and Peru.

This article – adapted and summarized from the original publication (Good, C. et al. 2022. Bactericidal activity of peracetic acid to selected fish pathogens in recirculation aquaculture system water. Aquaculture Research 2022; 00:1–6) – reports on a study to determine the PAA concentration and exposure duration associated with complete elimination of specific pathogens, as determined by colony count reduction in water from a salmonid RAS.

To carry out PAA experiments within RAS water, initial water samples were collected in sterile 1-liter glass bottles from the culture tank side drain of an on-site experimental-scale freshwater RAS, as described in previously published studies. At the time of sampling, the RAS was operated at low exchange, was stocked with post-smolt Atlantic salmon (Salmo salar) reared at normal commercial densities and provided with a standard commercial feed at hourly intervals via automated feeders with feeding rates adjusted periodically based on observations related to satiation. Feed loading was approximately 800 liters of makeup water per kg of feed.

This RAS provided suitable water for successful experiments involving Y. ruckeri and W. ceti; however, this same water hindered the assessment of F. columnare. Therefore, a second on-site RAS was used as a water source for this bacterium; it was identical in scale to the initial RAS but was operated at a higher flushing rate.

For detailed information on the experimental design and analytical procedures, and statistical analyses, refer to the original article.

Our results provide RAS producers with useful information regarding the effectiveness of PAA to reduce populations of specific bacterial pathogens residing in “typical” RAS water and contribute to the growing scientific knowledge base that will inform regulators when evaluating PAA’s potential use in aquaculture settings. Our findings need to be considered in combination with other studies focusing on (i) PAA toxicity to specific aquaculture species, (ii) the safety of PAA for use in RAS and its potential effects on biofilter nitrification, (iii) the impact of differing water quality profiles on PAA efficacy and kinetics, and (iv) the toxicity of PAA to other important fish pathogens in order to develop comprehensive strategies to effectively combat waterborne pathogens in RAS.

Similar to hydrogen peroxide (H2O2), which has been shown to be useful and biofilter-safe in commercial RAS, PAA has strong potential for application as a water disinfectant in operational aquaculture systems; however, PAA is a much more potent disinfectant in comparison to (H2O2).

It is unknown what water quality characteristic(s) inhibited F. columnare from fully entering into suspension in the RAS water used during Experiment 1. Previous research has demonstrated a significant water quality effect on the pathogenicity F. columnare, with these authors considering divalent cation concentration (i.e., water hardness) being a major reason for reduction in virulence. In our study, hardness likely did not contribute to the observed F. columnare clumping. Although hardness was not measured, alkalinity and hardness tend to correlate and, as such, the hardness in the second trial (in which F. columnare easily entered into suspension) was likely higher than in the first trial, based on alkalinity data and our historical alkalinity/hardness measurements.

Among other water quality parameters measured, nitrate-nitrogen, nitrite-nitrogen and total ammonia nitrogen differed significantly between trials; however, little research has been carried out examining the effects of these parameters on F. columnare viability and pathogenicity. Other authors have determined that elevated total ammonia limited F. columnare infection in channel catfish but, as with hardness, total ammonia nitrogen was actually higher in our second, successful experiment.

Beyond the water quality profile differences observed between experiments, other speculative chemical and/or biological causes for the apparent inactivation of F. columnare in low-exchange RAS water include the effects of accumulated humic substances or F. columnare-specific bacteriophages [viruses that infect and replicate inside bacteria]. Significant additional research is required to understand the observed effects of low-exchange RAS water on F. columnare viability.

The majority of important bacterial fish pathogens are Gram-negative, and as such are likely more susceptible to disinfectants such as PAA; however, further research is required to determine differences in susceptibility between additional important Gram-negative (e.g. Aeromonas salmonicida, Edwardsiella tarda and others) and Gram-positive (e.g. Streptococcus iniae, Renibacterium salmoninarum and others) pathogens of farmed fish.

Based on our results, we provide PAA concentration and exposure duration data for 6-log reduction in three important bacterial fish pathogens while in RAS water. Further research should examine, among other things, additional fish pathogens and/or varying profiles of RAS water quality. 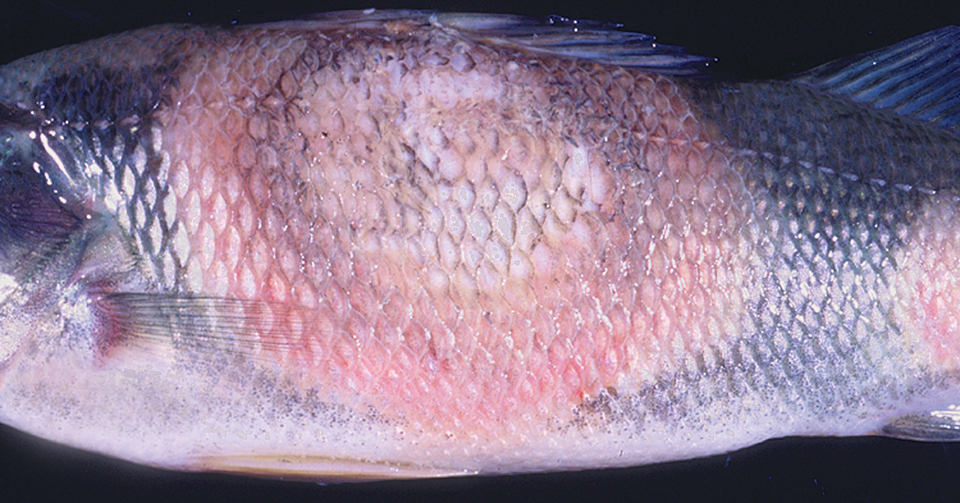 Yellow perch is an emerging aquaculture candidate susceptible to a wide range of disease syndromes with infectious and non-infectious causes.

Fixed microbial communities grown as periphyton on immersed substrates present advantages in terms of pond productivity and carbon and nutrient absorption from water. Periphyton can reduce feed inputs as well as increase growth and survival rates in shrimp.