Globally, improved and more cost-effective aquafeeds present a main concern for the aquaculture industry. One potential approach to improving feed is the utilization of microbial communities as natural feed develops using nutrients available in culture ponds. Aquatic microbial communities can grow on immersed substrates as periphyton or in suspension as floc.

Previous works have been published about the use of artificial mats with spontaneous periphyton for fish and shrimp culture. Their results showed that periphyton can be an efficient way to reduce feed input in ponds as well as increase growth and survival rates in shrimp.

However, applications at shrimp farms have been impaired by variable results and problems related to the irreproducible process of spontaneous periphyton formation. In fact, spontaneous periphyton can contain malefic microorganisms that are either pathogenic (vibrios, etc.) or toxic (cyanobacteria, etc.) to shrimp.

The authors’ companies, Marinazul S.A. and Concepto Azul S.A., initiated in Peru a program for the isolation of native microorganisms from shrimp pond mats with their subsequent molecular characterization and evaluation as candidates for producing domesticated beneficial periphyton suitable for the culture of Pacific white shrimp (Litopenaeus vannamei).

This work had financial support from a Financiamiento para la Innovación, la Ciencia y la Tecnología program through the Interamerican Development Bank and the government of Peru. The Sea Institute of Peru and National University of Tumbes also provided support.

The spontaneous development and three-dimensional building of periphyton on polypropylene geotextiles were first evaluated through observations with a laser-scanning confocal microscope (LSCM). Specific fluorochromes permit the recognition of Gram-positive and Gram-negative bacteria. Cyanobacteria and diatoms are recognized based on their specific chlorophyll autofluorescence.

Bacteria were isolated from geotextiles at different times of mat colonization in order to obtain strains corresponding to immediate early, early, late and very late periphyton building. Cultivable bacteria as isolated colonies were subsequently characterized and identified through the amplification and sequencing of ribosomal DNA.

Other types of microorganisms – microalgae, ciliates and nematodes – were also isolated in spontaneous periphyton. Using micromanipulators placed on an inverted microscope, a set of 36 microalgae were isolated, characterized and then cultivated using classical culture media.

Ten ciliate strains were isolated and cultivated in a medium based on rice powder with Bacillus bacteria isolated as previously explained. Three nematodes strains were cultivated on the ciliates and Bacillus cultures. Most of these microorganisms were cryopreserved in liquid nitrogen.

Potentially beneficial Bacillus bacteria strains were selected on the basis of characteristics such as capacity to build a biofilm that attracts and facilitates the settlement of diatoms, capacity to disrupt the process of “quorum sensing” of pathogenic bacteria through the production of lactonase, capacity to facilitate shrimp digestion through amylase and protease activities, and capacity to colonize shrimp digestive tracts.

Nematodes, ciliates and photosynthetic microbes were selected by bioassays according to the growth and survival of L. vannamei larvae.

A protocol to produce a domesticated artificial periphyton was progressively established and optimized using different associations of the strains previously selected as potential candidates. The development and three-dimensional building of these domesticated periphytons were monitored by LSCM.

Bioassays were carried out with shrimp postlarvae produced from broodstock previously certified as free of rickettsia (NHP) and other endemic viral infectious pathogens in Peru (WSSV, IHHNV, BPV). The evaluation of the strains and the final selection of the most beneficial strains were performed on the basis of survival and growth rates. Consumed periphyton was directly assessed by LSCM. Growth rates for postlarvae given periphyton increased up to 2.5 times over the growth of shrimp grown with traditional feeds.

Evaluation of the artificial periphyton was carried out under semi-intensive (25-30 shrimp/m2) and intensive (200-250 shrimp/m2) conditions using geotextiles and plastic sheets as substrates and an optimized simplified protocol (bacteria-diatoms) for preparation of the periphyton.

Preliminary results were very encouraging for the first six weeks of shrimp culture with a 30 to 50 percent increase in growth rates and 48 percent rise in biomass during the period when the domesticated periphyton was not yet overgrazed and replaced by cyanobacteria that affect the shrimp. Further research is currently under way with the selected strains associated with beneficial Spirulina cyanobacteria in order to impair the development of pathogenic spontaneous cyanobacteria.

The concept of domestication of beneficial microorganisms associated with shrimp will have to be extrapolated, on one hand to flocs that occur spontaneously in shrimp ponds and on the other to the microbiota of the shrimp digestive tract through the isolation of native bacteria and yeasts for artificial conventionalization of early larval stages. 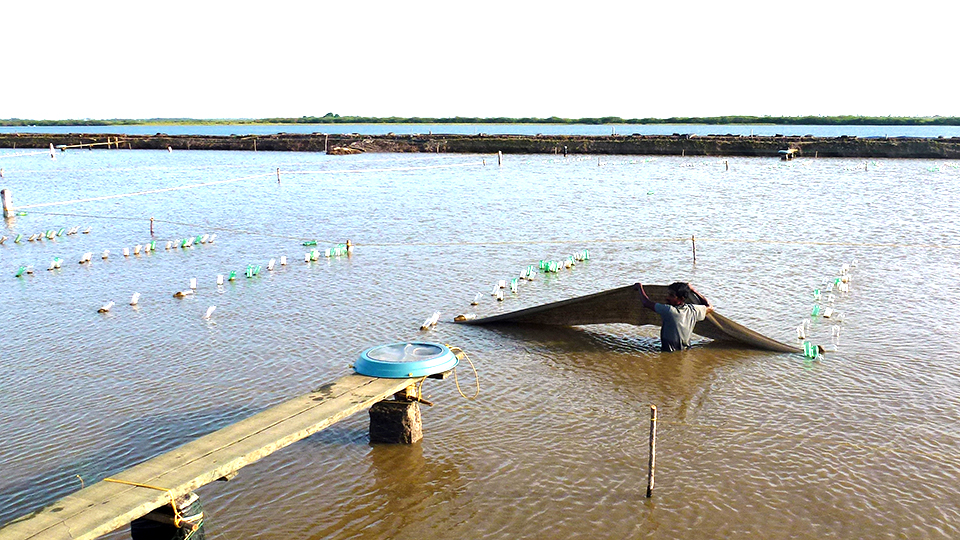