Industry proponents, seeking a clearer pathway through the permitting process, get a glimmer of hope

In the weeks since U.S. President Donald Trump issued an executive order prioritizing aquaculture development in U.S. marine waters, members of the seafood industry are, in a time defined by global uncertainty, feeling hopeful for the future.

The order aims to increase the domestic production of American seafood by making the aquaculture permitting process more timely and efficient, appointing the National Oceanic and Atmospheric Administration (NOAA) as the lead agency for aquaculture projects located outside of state waters in the U.S. exclusive economic zone. It also establishes new opportunities for aquaculture that include finfish aquaculture in marine and coastal waters.

The order represents an unprecedented moment for the collective seafood community in the United States, said Margaret Henderson, campaign manager for Stronger American Through Seafood, an industry coalition that advocates policies and regulations to increase U.S. production of healthful, sustainable and affordable seafood.

“We’ve never had this much attention and priority, much less during a global pandemic. Seafood is getting top billing right now and it’s an opportunity for us on the industry side to organize and work to educate policy makers on the importance of introducing healthful seafood. It’s a moment we cannot overlook,” she said.

Propelling U.S. aquaculture will take an act of Congress

“Regulatory constipation has been the primary impediment to the growth of offshore aquaculture,” he said.

Sims has been waiting for a permit for a demonstration net pen in the Gulf of Mexico, the Velella Epsilon project, for the past three years. The pen would stock, culture and harvest yellowtail relative Almaco jack, serve as an educational platform and collect data associated with offshore aquaculture production. In the process, Sims hopes it will pioneer a commercial permit application process and demonstrate it so that others can follow.

“Because of this order, it will be easier to put this into law, and once that happens it will encourage more applicants to move forward with new applications for offshore aquaculture– because they’ll see there’s a pathway forward,” he said.

That pathway forward is not just crucial for the economy and food security, but a matter of morality, said Sims. “It’s morally reprehensible that we import more fish per dollar value than any other country. The U.S. has a moral responsibility to start producing more of its own seafood, and we can do it according to our own environmental and safety standards.”

Sims believes offshore aquaculture is the only way to scale the seafood industry in an environmentally responsible way, despite all the buzz about land-based aquaculture using recirculating aquaculture systems (RAS).

“We can’t produce more marine fish with the current RAS – they’ve not shown the ability to scale, and they’ve not proven to be cost effective,” he concluded. “We need to figure out how to farm the real chicken of the sea and offshore aquaculture will allow us to make seafood more affordable for people.”

Todd Madsen purchased some of the assets of Kona Blue in 2010, and his iteration of the business, Blue Ocean Mariculture, expanded its permitting in 2015 to create a larger, economically viable farm for its Hawaiian Kanpachi. Today the company produces 800 tons annually and expects to grow up to 2,400 tons by 2023.

“We did not have any trouble with our permitting process, and since we operate in state waters and already have a lease and permits for mariculture, the executive order does not benefit us directly,” he said. “However, the [order] and [Advancing the Quality and Understanding of American Aquaculture, or AQUAA] act will benefit us generally by bringing more investment into the industry and by tying NOAA more closely to management and oversight of a new mariculture industry.”

Stronger America Through Seafood has been one of the driving forces behind AQUAA, introduced last year by Republican Sen. Roger Wicker of Mississippi.

“Having NOAA involved is going to add clarity to the permitting process, which means communication will be improved and the process will be more informed,” Madsen added (representatives from NOAA did not respond to numerous requests for comment in this article.). “There’s investor interest out there in helping to develop the aquaculture industry, but we’re not going to get that capital investment in domestic seafood production unless there’s a clear legal framework for how to operate.”

Innovasea, a Boston-based company that provides complete end-to-end solutions for sea- and land-based fish farming and aquatic species research including equipment, consulting and platforms and products, has worked with numerous companies over the last 25 years that were interested in open-ocean aquaculture in the United States. Many of them were start-ups that failed to get off the ground due in large part to regulatory red tape.

“The United States’ regulatory approach to aquaculture has always been complex and confusing,” said David Kelly, CEO. “The end result is an expensive, time-consuming process that often acts as a disincentive for new ventures or investment. We know of a number of viable projects that would have produced sustainable, locally grown seafood and created a number of good jobs but they never got past the initial planning stages because there were simply too many unknowns during the permitting process.”

Hubbs-SeaWorld Research Institute’s Pacific Ocean Aquafarms Project off the coast of Southern California is the poster child for the shortcomings of the permitting process up until now, he adds: “Literally millions of dollars have been spent on that permit application and there’s still no resolution.”

Sims notes that the High Level Panel for a Sustainable Ocean Economy recently recommended a transition from terrestrial agriculture to marine aquaculture.

“We have to expand in the oceans because the greenhouse gases associated with expanding terrestrial agriculture cannot be sustained, and we don’t have enough land area or fresh water,” he said. “So, from an environmental perspective, expanding into offshore aquaculture will be critical.”

Aquaculture is not a Republican or Democrat issue, it’s an issue of health, economy and the environment.

Wild capture is critical, and will continue to be, said Henderson of SATS.

“Wild capture fishermen are already competing with aquaculture, just not with American aquaculture. Wouldn’t it be brilliant if we could rebuild the massive downstream infrastructure across the entire seafood supply chain, by building up domestic seafood production? Harvesters are just the bare beginning of how the jobs, the people, the money and economy of seafood works. Trucking, distributors, packers, retailers, restaurants – that entire supply chain is trying to get more traceable, sustainable, affordable seafood,” she said. “Customers prefer domestic and local seafood, so I’d submit that wild and aquaculture can and should work together.”

While some have claimed the order will undermine environmental checks and balances on new permit applications and reduce the authority of the agencies conducting them, Henderson contends this is simply not true.

“In no way will existing environmental statues and the agencies that enforce them be undermined,” she insisted. “The idea is just to establish that NOAA, as the lead agency, work with the Army Corps, the Environmental Protection Agency and the Bureau of Ocean Management as it guides permit applicants through a process that will be clarified for the first time in decades.”

The executive order represents an unprecedented moment for the collective seafood community in the United States, said Henderson, adding that it’s highly likely Congress will sign the executive order into law.

“We have a bipartisan bill already introduced into the house and on the Senate side it appears there’s a well-vetted, well-educated piece of legislation outlining national standards for offshore aquaculture with a deliberate, reasonable timeframe for permit processing,” she said. “We anticipate that will be introduced in the next month or so. Timing is anybody’s guess, but we stand to help support that bill, and if it doesn’t make it to full passage this year, we’ll start again next year. Aquaculture is not a Republican or Democrat issue, it’s an issue of health, economy and the environment, and I think we can all agree it needs to be done.” 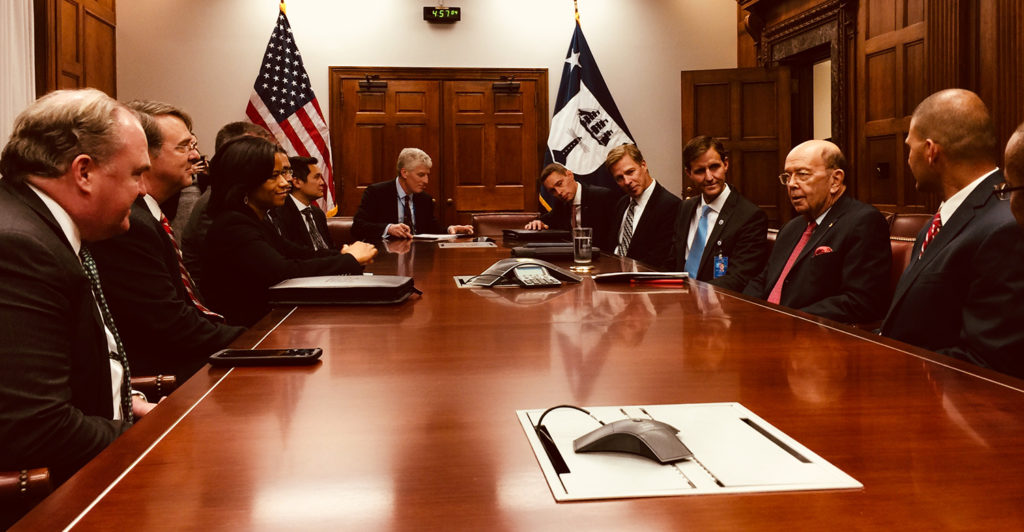 Propelling U.S. aquaculture will take an act of Congress

Stronger America Through Seafood aims to influence federal policymakers to create guidelines that would give offshore aquaculture a chance to show its potential.