Of the 26 pounds of seafood the U.S. federal government recommends each American consume annually, the available supply – much of which is imported – falls two pounds shy of that. And despite U.S. coasts hosting the world’s second-largest amount of territorial waters, the country, according to NOAA research, is only the world’s 16th largest seafood producer.

Offsetting such shortfalls, some say, can happen through increased domestic seafood production through aquaculture. Without a clear framework for permitting and regulating such activity in federal waters – which extend from 3 to 200 miles offshore – U.S. aquaculture is fantasy than reality.

That may soon change as an industry-centered effort to make legislative changes is on the move. Dubbed Stronger America Through Seafood (SATS), representatives of 14 companies such as Cargill, Pacific Seafood, Taylor Shellfish and Sysco have formed a coalition to lobby federal policymakers for the creation of guidelines that would give offshore aquaculture a chance to show its potential.

Titled “Advancing the Quality and Understanding of American Aquaculture Act” (AQUAA Act) the draft legislation is sponsored by Rep. Steven Palazzo (R-Miss.). In late July, a letter soliciting bipartisan co-sponsorship of the act began circulating through Congress. In addition to urging legislators to create clear and simple regulations, the letter highlighted the potential economic benefits of expanding the industry: replacing jobs once prevalent in coastal fishing communities, sustainable forms of seafood production and restoration of certain species and their lost habitats.

“The AQUAA Act provides a comprehensive, nationwide permitting system for, and management of, marine aquaculture facilities in the Exclusive Economic Zone (EEZ),” the letter reads. “It authorizes the National Oceanic and Atmospheric Administration (NOAA) to facilitate responsible aquaculture development in federal waters through a streamlined regulatory process and increased interagency coordination that preserves existing environmental standards. A more robust domestic aquaculture industry will stimulate the economies of our coastal communities, expand opportunities for U.S.-based feed producers and increase consumption of healthy seafood by American consumers.”

Margaret Henderson, SATS campaign director, has received a mix of enthusiasm and hesitation from legislators and allied groups who are just now beginning to understand the benefits offshore aquaculture. She told the Advocate that those who understand open ocean farming view it as sustainable, while those with reservations don’t yet understand the industry’s evolution and its ability mitigate its impacts.

Sustainable aquaculture has the ability to take a mediocre fishing ground and make it some of the most productive water on the planet.

But public perception matters little, she said, if lawmakers don’t chart a new course that allows farmers an actual opportunity to build offshore.

“We think we have the best opportunity to make change through the establishment of a regulatory framework,” Henderson said. “Convincing 300 million Americans to shift a misguided perception of farmed seafood is not something our group should take on.”

Bob Rheault, executive director of the East Coast Shellfish Growers Association, said that ongoing education about offshore aquaculture is essential, but added that the AQUAA Act needs fine tuning. Its current wording cites the need for permitting systems and processes, but Rheault said it should specify leases, not permits.

“A lease is a tangible asset, but they can take away your permit for whatever reason,” Rheault said. “Part of the problem is the people you talk to in D.C. don’t always understand the business nuances between permitting and leasing. I’m hoping things like that will get fixed in committee.”

A supporter of the AQUAA Act, Rheault said potential opponents should look at successful finfish and shellfish farming operations in Norway and New Zealand for guidance. Proven sustainable and duplicable, he said there’s no reason the United States can’t follow their lead.

“We have the toughest regulations in the world here, so there really shouldn’t be any concerns that we’ll not do this the right way,” Rheault said. “Sustainable aquaculture has the ability to take a mediocre fishing ground and make it some of the most productive water on the planet.”

Rheault says that America’s dependence on imported seafood represents a $15.5 billion trade deficit that aquaculture could offset someday. Merely continuing to buy more seafood from Asia and South America is not only unsustainable, but “we’re exporting our environmental damage when we do that,” he added.

Bill DiMento, vice president of corporate sustainability and government affairs at High Liner Foods, one of the largest seafood companies in North America, also supports the AQAA Act. Not only would fish farms in U.S. waters provide a nearby and more affordable source of raw material for its plants in Canada, he said aquaculture would create jobs lost years ago to industry modernization and the moratorium placed on Canadian cod fisheries in 1992.

The economic implications are profound, and we believe the money will come since the desire is already there.

“We know consumers would love to see more domestic production,” DiMento said. “Traceability, transparency, local, buy American … all those themes are near and dear to those who live in the United States. All of this would be great for the economy, for jobs and consumers.”

Henderson said that turning the act into a bill that ultimately gains President Trump’s signature will take time because of questions over jurisdiction. The current patchwork of laws is overseen by federal, state and local agencies that often disagree on their application, creating a significant barrier to entry. Such uncertainty makes investors reluctant to enter aquaculture despite its incredible growth in other countries, she added.

“There are investors poised to make this a reality if the framework is made to provide them certainty and consistency,” Henderson said. “The economic implications are profound, and we believe the money will come since the desire is already there.” 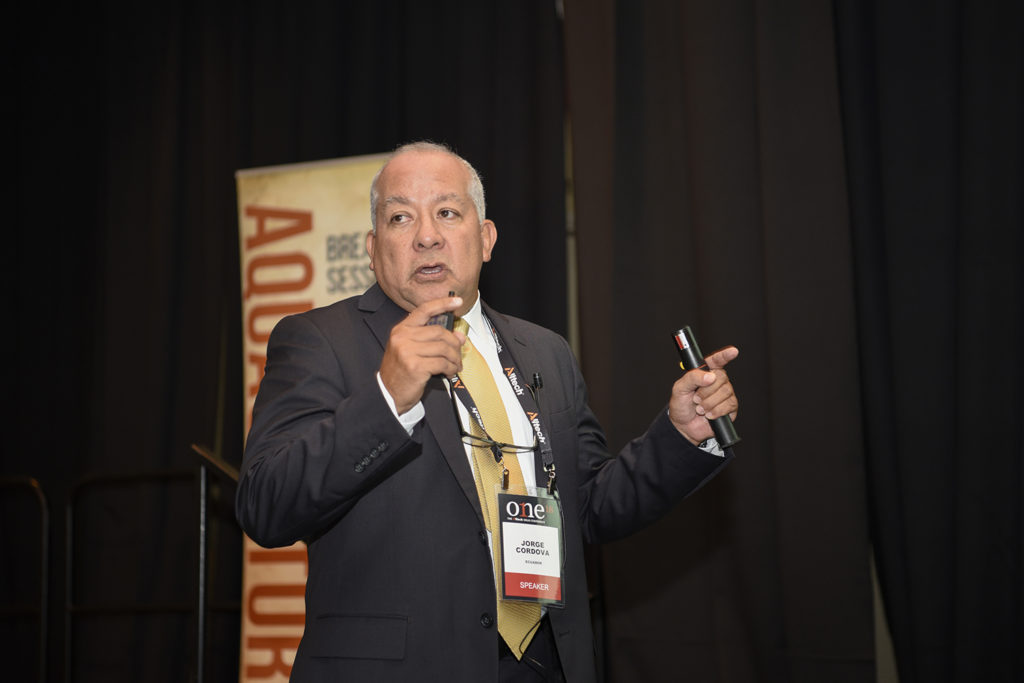 Wide-ranging advances in aquaculture presented at Alltech ONE18

The consensus among several presenters at the aquaculture portion of the Alltech ONE18 conference was clear: Much more seafood is needed to feed humans, whose numbers will reach 8 billion in less than six years.