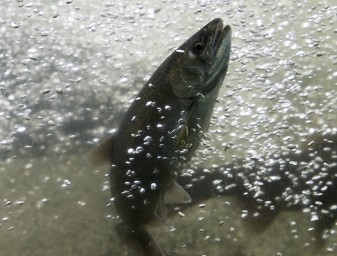 Organic seafood standards are slowly churning through the U.S. federal government’s approval process, but still with no clear timetable for finalization.

George Lockwood, chairman of the Aquaculture Working Group (AWG), said that organic aquaculture standards originally presented to the National Organic Standards Board (NOSB) back in 2010 are now back in the hands of the Office of Management and Budget (OMB), which reports directly to the White House. Lockwood shared the news during an April 20 webinar hosted by the University of Mississippi School of Law and the Sea Grant Law Center.

However, considering years of vocal opposition from lobby groups who seek to prevent the U.S. Department of Agriculture from allowing its coveted USDA Organic label to be applicable on aquatic products, Lockwood remained skeptical that the finish line was in sight.

“The level of objection over the last six or seven years has declined substantially,” Lockwood said during the webinar, which was titled “Organic Aquaculture Standards: Navigating Potential USDA Regulations.”

“The people who were opposed have come to the realization that aquaculture is here to stay,” he added. “We are at the forefront, pushing technology in terms of the environment and animal husbandry.”

Lockwood said he received word of the standards’ progress to OMB via email from Miles McAvoy, USDA deputy administrator and head of the agency’s National Organic Program (NOP), which assigned the AWG in 2005 to advise NOSB on standards development. Lockwood has been pushing for organic standards for aquaculture since 1999, and cautioned that it could be another 17 years — or longer — for official standards to be finalized.

“How long it takes is anybody’s guess,” Lockwood told the Advocate after the webinar concluded. “We’re in an election year, which may affect how OMB responds. My gut tells me that with a change in government it will not happen that fast. It is a real possibility that our remaining opponents, who reside in Washington, will continue to lobby and they will get hundreds of people on their mailing lists to make opposing comments once the proposed final rule gets published by USDA NOP. That could have a major impact that would delay things further.”

We are at the forefront, pushing technology in terms of the environment and animal husbandry.

Alexandra Chase, Ocean and Coastal Law Fellow at the National Sea Grant Law Center, moderated the webinar and offered a more optimistic timeline for standards approval. In a best-case scenario, if all concerns can be satisfied and no major new ones are raised by the conclusion of a 90-day public comment period, a release date for the standards could feasibly occur in the middle of 2017.

“Presidential appointment priorities could change the timetable,” she said, adding that organic standards are now in “step 8” of a complex, nine-step process that would end in the publication of final rule, interim final rule or direct final rule (see Fig. 1).

Chase added that there is a “financial incentive” to pass this regulation, one that would allow U.S. producers to compete in the growing organic seafood market. Organic foods are a $39 billion market in the United States, she added, and organic is one of the fastest-growing segments of American agriculture. In the absence of official standards for farmed seafood, however, no seafood product can bear the USDA Organic label.

Lobby groups have stalled progress for USDA Organic standards numerous times, Lockwood said, and two in particular — Food & Water Watch and The Center for Food Safety, both headquartered in Washington, D.C. — are “politically present” and have been able to influence policy decisions. Both groups are opposed to aquaculture in general, Lockwood said, particularly the use of open water net pens, which are commonly used to farm popular species like Atlantic salmon.

The issue becomes not only a question of when, but the level of implementation, monitoring and industry and consumer buy-in.

The groups’ counterparts in the AWG are at a distinct disadvantage, Lockwood said, as its members are all volunteers and can’t necessarily travel to the nation’s capital to offer a balanced perspective when most needed.

“The AWG has excellent and dedicated members, but none have the time to keep up the never-ending battles,” Lockwood said.

Currently, U.S. retailers and restaurants can promote seafood that was “raised organically” if it was certified organic in the United Kingdom or the European Union — except for California, which does not allow this practice.

The main concerns with organic aquaculture center on the allowance of vaccines and chlorine in culture water — both of which the AWG deems critical for organic aquaculture to be possible — as well as the composition of the aquafeeds (using fishmeal and fish oil from certified sustainable wild sources, for example) that would be used. Therefore, any proposed aquaculture standards are seen by many as less strict than organic agriculture rules.

And, according to Chase, “Some environmentalists argue that restricting the movement of migratory species like salmon is in opposition to the foundational philosophy of the organic movement and what consumers believe they are purchasing.”

The benefits of providing organic standards, she added, include a consistent and enforced quality and performance standards, not to mention a price premium of 75 percent to 250 percent for certified organic aquatic animal products above the price of conventionally produced seafood.

Chase sees the publication of final standards as likely: “The issue becomes not only a question of when, but the level of implementation, monitoring and industry and consumer buy-in.”