Natural waters have a very complex chemical composition and may contain almost any substance found in the atmosphere, in the Earth’s crust, or in living organisms. They also may contain substances synthesized by man. However, the major dissolved constituents in natural water are a few inorganic substances including calcium, magnesium, potassium, sodium, bicarbonate, sulfate and chloride.

The total hardness of water is the concentration of divalent cations expressed as equivalent calcium carbonate. The divalent cations in seawater are calcium, magnesium, and strontium. Average seawater has a total hardness of 6,569 milligrams per liter. The pH of seawater is normally about 8.1 to 8.3. Except for silicate and bicarbonate, seawater is two or three orders of magnitude more concentrated than river water in each major substance.

Brackish water results from the dilution of seawater by river flow. The average concentrations of major dissolved substances in river water also are provided in Table 1.

Brackish water is more dilute than seawater in most major substances, with the decreases in substance concentration almost directly proportional to the degree of dilution with freshwater. For example, a 50 percent dilution of freshwater and seawater would provide a salinity of roughly 17.25 ppt and a sodium concentration of about 5,250 milligrams per liter.

One practical application of the dilution concept is in acclimation of postlarvae at a hatchery. In diluting salinity to match the level at ponds, hatchery managers may inadvertently dilute alkalinity to levels that would fail to buffer declines in pH during packing and transport. This stress could be avoided by measuring alkalinity in the mixed water and adjusting it to approximately 100 milligrams per liter before packing.

Shrimp farmers like to apply liming materials to ponds. Some uses seem justifiable, but others are not.

Routine additions of small quantities of lime have little appreciable effect on water quality. The equilibrium concentrations of total hardness and total alkalinity in an open system at equilibrium with atmospheric carbon dioxide and calcium carbonate are 60 to 80 milligrams per liter. Thus, application of liming materials to ponds filled with seawater or brackish water is seldom useful because the materials will not dissolve.

This is true for all types of liming materials (calcium carbonate, calcium oxide, and calcium hydroxide). Shrimp pond waters usually have a pH of 7.5 to 8.5, and application of calcium oxide or calcium hydroxide will remove carbon dioxide and cause the pH to increase. This can have undesirable consequences on productivity by limiting phytoplankton growth.

Some farmers think that applying liming materials increases the calcium concentration in the water and helps shrimp molt. This is not very likely, as seawater and brackish water already contain a lot of calcium. For example, suppose that 50 kilograms per hectare of calcium oxide is added to a 1-hectare pond that is 1 meter deep. The calcium oxide dose contains 28 kg of calcium. Even if the calcium oxide dissolves completely, calcium would only increase by 2.8 milligrams per liter in the pond.

Type and size of limestone

Some farmers use dolomitic limestone because they think the magnesium in the dolomite will be beneficial. Again, shrimp pond water contains so much magnesium that the small increase resulting from dolomite application would be meaningless.

Obviously, shrimp farmers should measure total alkalinity in pond water and apply liming materials to maintain concentrations. Alkalinity should be maintained at a minimum of 70 to 80 milligrams per liter, and levels of 100 to 120 milligrams per liter are better. Where liming is needed to improve alkalinity, it makes no difference if the liming material was produced from calcitic limestone (calcium carbonate) or dolomitic limestone (calcium magnesium carbonate).

When purchasing agricultural limestone (pulverized calcium or calcium magnesium carbonate), the most finely ground material should be selected. Limestone is not very soluble, and unless the particles are very fine, they will settle to the bottom and not dissolve.

Because of the high concentration of ions in seawater, pond soils often become saturated with basic ions such as calcium, magnesium, sodium, and potassium. Thus, pond soils are saline and usually have a pH of 8 or above.

Pond managers tend to lime bottom soils routinely between crops. This practice is not necessary unless pond soil pH is below 7. Much expense and effort can be avoided by simply measuring pond soil pH and liming only the acidic soils.

Some farmers use silicate fertilization to encourage diatoms. Literature suggests that if silicate concentration is above 1 milligrams per liter silicon (Si), diatoms will not be limited by a shortage of this element. Average Si concentrations in seawater and freshwater are about 3 and 6 milligrams per liter, respectively. Thus, silicate is probably not limiting in most shrimp ponds, and especially in ponds with low-salinity water.

Potassium is a key nutrient in plant growth, but phytoplankton growth is not limited by potassium at concentration levels above 1 or 2 milligrams per liter. Inclusion of potassium in shrimp pond fertilizers is usually not necessary.

Shrimp pond water has a very high sulfate concentrations. When anaerobic conditions develop in pond bottom soils, certain bacteria can use the oxygen from sulfate in respiration. The organisms produce hydrogen sulfide as a metabolic waste that is extremely toxic to shrimp. Because of the high availability of sulfate in their pond water, shrimp farmers should be especially vigilant to avoid the development of anaerobic conditions at the soil-water interface.

There is no need to make analyses of shrimp pond water for most of the substances shown in Table 1, for they will be at high concentration. However, measurements of total alkalinity could be useful in determining if waters need to be limed. Total alkalinity should be maintained at a minimum of 80 milligrams per liter, with levels of 100 to 120 milligrams per liter preferred. Silicate analyses will reveal if pond waters are naturally low in silicate and could possibly benefit from silicate fertilization. Pond bottom soils normally will not benefit from liming unless the pH is below 7. 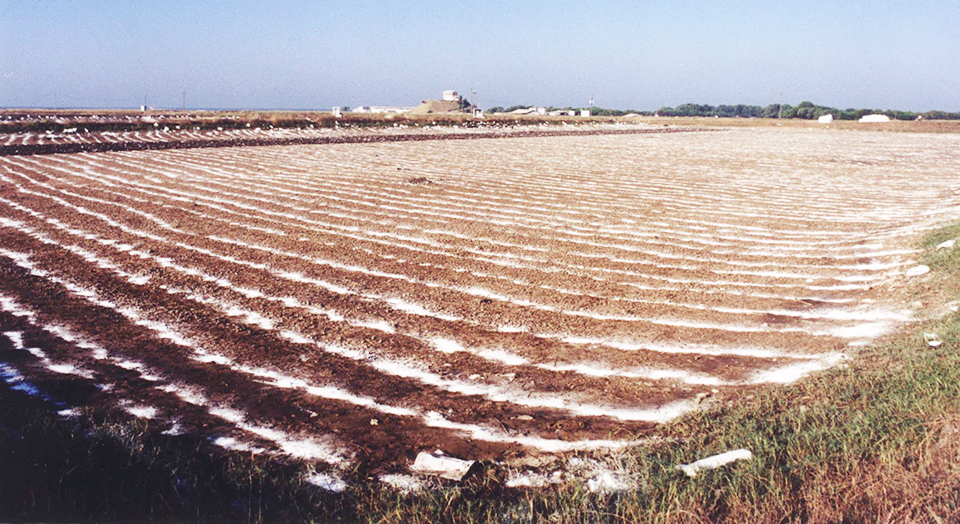 Carbon-nitrogen (C:N) ratio is an important variable related to soil fertility. Intensive ponds have lower C:N ratios, while higher ratios are found in extensive ponds and those constructed in organic soil. 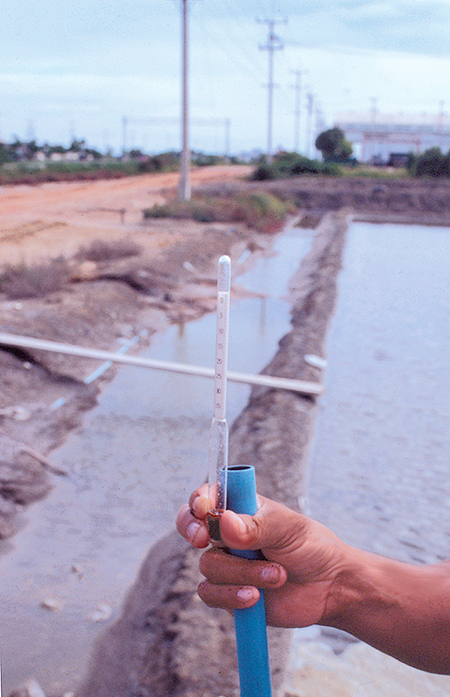