Fish and shrimp farmers often refer to the carbon-nitrogen or C:N ratio in ponds. They may apply organic matter, nitrogen fertilizer or both to adjust this ratio. The idea of the C:N ratio was taken from soil microbiology, where this ratio is considered an important variable related to soil fertility.

Terrestrial soils often have a layer of fresh or partially decomposed organic residue such as leaf litter on the surface. As this material continues to decompose, it is mixed into the soil by physical and biological processes and becomes humus. Humus is an extremely complex organic matter comprised of highly decomposed organic residues combined with the remains of dead bacteria, fungi and other decomposer organisms. Living decomposer organisms continue to decompose humus, but at a slow rate.

In ponds, uneaten feed, feces and dead plankton settle from the water and decompose at the bottom soil surface. Remains of these materials mix with bottom soil to become pond soil organic matter. The C:N ratios in bottom soils of aquaculture ponds usually are about the same as for terrestrial soils. Lower C:N ratios have been reported in ponds with intensive production. Higher ratios have been found in extensive ponds and especially those constructed in organic soil.

The C:N ratio of organic residues added to soil is important because it influences the rate at which a residue decomposes and the amount of nitrogen recycled from the residue. This relationship occurs because bacteria, the major microorganisms of decomposition in most terrestrial and aquatic soils, contain about 10 percent nitrogen, and they typically convert about 10 percent of the organic matter in a residue to bacterial biomass on a dry matter basis.

When bacteria decompose in 100 kg of organic matter that contains 2 percent nitrogen, 10 kg of bacterial biomass containing 1 kg of nitrogen will result. The residue contains 2 kg nitrogen – more than that needed by bacteria to decompose it. The excess 1 kg will be released into the environment as ammonia nitrogen.

On the other hand, suppose the residue contains only 0.5 percent nitrogen. There would be only 0.5 kg nitrogen in the residue – not enough to allow bacteria to quickly decompose it. In this case, one of two phenomena will occur.

The bacteria could remove and immobilize nitrogen from the surroundings to decompose the residue. But, if the environment is deficient in nitrogen, the residue will decompose slowly, because part of the nitrogen necessary for decomposing it must come from recycling. Bacteria have to die and be decomposed for their nitrogen to be released for reuse in degrading the residue.

Residues with carbon-nitrogen ratios of 20:1 to 30:1 decompose quickly and completely, and release through mineralization considerable nitrogen. The addition of such residues does not result in an increase in the soil organic matter concentration.

The addition of residues with low C:N ratios sometimes leads to the breakdown of older organic matter in the soil, whose decomposition rates were formerly limited by insufficient nitrogen. A residue with a C:N ratio greater than about 20:1 usually decomposes slowly unless there is abundant nitrogen in the environment to supplement that of the residue. This type of residue causes soil organic matter concentration to increase.

In an experiment I once conducted, organic residues with a lot of nitrogen and a narrow C:N ratio decomposed quickly, as illustrated in Fig. 1, using dissolved-oxygen consumption in water receiving dead plant material with different percentages of nitrogen as an indication of the rate of decomposition. Nitrogen mineralization also increased as a function of the amount of nitrogen in the plant residues.

In organically fertilized ponds, the wide C:N ratio of added manure favors the accumulation of organic matter in pond bottom soils. Nitrogen fertilizer can be applied with the manure to encourage its decomposition. In ponds fertilized with commercial chemical fertilizers such as triple superphosphate and urea, ponds, the main input of organic matter is dead plankton that contain 5 to 10 percent nitrogen on a dry matter basis.

Dead plankton decompose rapidly because of their narrow carbon-nitrogen ratio, and bottom soil organic matter accumulation in fertilized ponds is less than in manured ponds. In ponds with feeding, residues are primarily uneaten feed, feces and dead plankton – all of which decompose easily. Moreover, the excretion of ammonia by the culture species assures high availability of nitrogen in the environment.

Soil organic matter is rather stable and decomposes slowly. However, fresh organic residues that are continuously added to aquaculture pond bottoms in uneaten feed, feces and dead plankton decompose quickly. Because of this, even in ponds with low soil organic matter concentrations, decomposition of fresh organic residues can lead to anaerobic conditions at the soil-water interface and low dissolved-oxygen concentrations in the water column.

One of the main benefits of mechanical aeration in intensive aquaculture is to supply oxygen to decompose the continual input of fresh organic residue. Development of methods for removing the fresh residue during the crop for decomposition outside of ponds would be desirable.

Ponds with organic soils usually have acidic bottoms and should be routinely limed. In addition, the application of nitrogen fertilizer to ponds during the crop and to their bottoms between crops accelerates organic matter decomposition. However, it may take several years before improvement in pond bottom soil condition is evident.

The C:N ratios of the suspended solids in intensive aquaculture ponds usually are quite narrow, because they are established mainly by the composition of the plankton. There also is a lot of nitrogen in the water from feeding. The carbon-nitrogen ratio normally is adequate for decomposition, provided the water contains sufficient dissolved oxygen and is not acidic. There usually is no need to apply additional nitrogen or organic matter aside from that added in normal management.

In highly intensive, heterotrophic aquaculture systems, the phytoplankton community is largely replaced by bacteria. There is plenty of nitrogen in such systems as a result of ammonia excretion by the culture species. Addition of organic matter, however, can provide food for the bacteria and increase the bacterial biomass available as food for the culture species. Crushed grain and molasses have been used as sources of organic matter in heterotrophic culture systems. 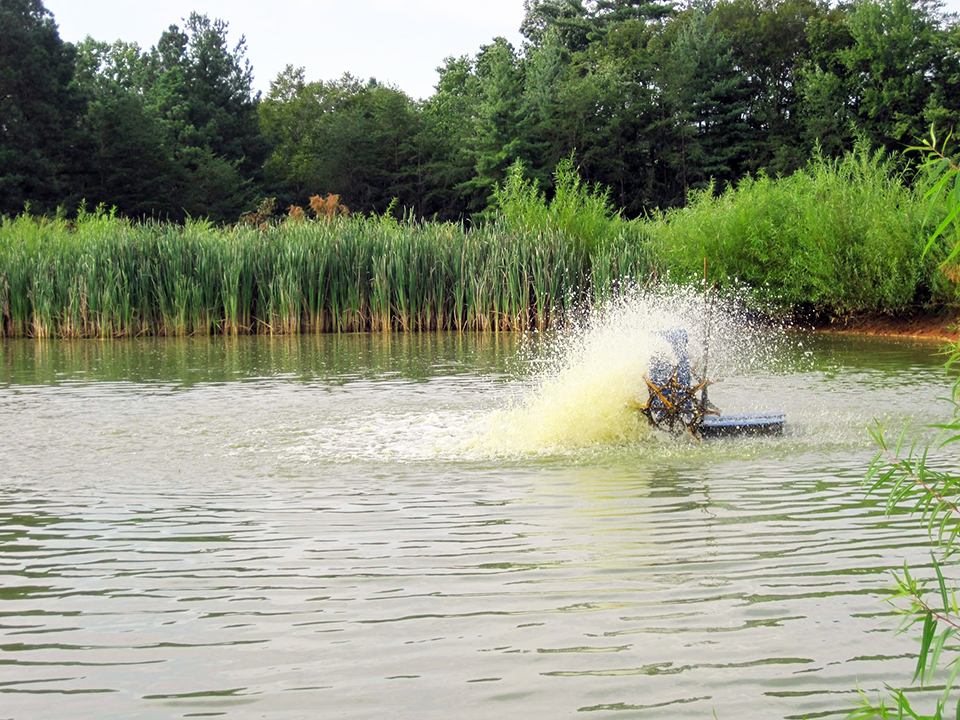