Spirulina platensis is an edible planktonic filamentous bluegreen algae used as a human health food around the world. This product is highly nutritious and safe when produced in controlled culture. It is also used as an ingredient in fish feeds and as a supplement when feeding prawn larvae.

Wild Spirulina is often found in warm alkaline lakes such as those in the Great Rift Valley of Africa, where it is the main food source for vast flocks of the Lesser Flamingo. Commercial Spirulina is a fine, dry powder, easily rehydrated. High quality, commercial Spirulina is usually spraydried. When rehydrated, the strands come apart as individual cells. These reconstituted cells are about 5 to 10 microns in size, and are easily eaten by the larvae.

Spirulina is a rich source of protein, vitamins, minerals, and pigments (Table 1). It also enhances the non-specific immune system, increasing the state of readiness of natural defenses. The combination of nutrients, pigments and immunostimulants explains reports of dietary Spirulina yielding better growth, reduction of stress and better appearance.

Fish have a fairly sophisticated immune system, similar in many ways to other vertebrates, and respond well to Spirulina. Studies at the USDA Fish Disease Laboratory have demonstrated that feeding fish for just one week on a Spirulina diet significantly improved the function of the immune system. Spirulina-fed fish had enhanced nonspecific cellular immune responses such as chemotaxis and phagocytosis. Spirulina-fed fish also produced significantly higher antibody titers to a thymus-dependent antigen. Japanese fish farmers use Spirulina because including even small amounts in a fish diet increases survival rates and improves appearance. The fish have a thicker mucous coat, healthier skin, richer color and more consistent growth.

Shrimp have a more primitive immune system than fish, but it is capable of being stimulated by Spirulina. Information from China shows feeding with Spirulina resulted in a 23 percent increase in survival and 5 percent increase in size, with the size range being much more uniform. Color was improved and it was observed that the larvae were more resistant to stress.

How to feed spirulina

Fish larvae can be fed Spirulina either through gut-loaded rotifers and artemia, or through formulated microparticulate diets. Spirulina powder mixes easily with other ingredients for pelletizing. Care should be taken not to overheat the product. Temperatures high enough to denature carbohydrates will destroy the beneficial properties found in Spirulina.

What about shrimp? Spirulina can be fed directly to the larvae of Penaeus vannamei at 20 mg of dry powder per one cubic meter of tank capacity at zoea; 2.0 grams at mysis, and at 0.5 grams for postlarvae. Some shrimp species should be fed more than others: Penaeus monodon should be fed about double or more than P. vannamei. The basic method may be adapted to other species and local conditions.

Best results are achieved when Spirulina is used in combination with fat-rich, live algae like diatoms. Spirulina powder is very rich in protein and vitamins, but does not contain enough fat for growing larvae. Fat-rich diatoms, together with dried Spirulina, can form an ideal diet that results in very strong postlarvae. Dried Spirulina may be used at each feeding, or the hatchery operator may want to alternate it with a high quality, artificial microparticulate diet, and artemia, depending on local conditions and availability.

High-quality Spirulina is produced in aquaculture operations for a consistent, safe and effective product. Spirulina is cultured in farms in the U.S., Thailand, China and India using very shallow, raceway-type ponds lined with either plastics or concrete. The highly-alkaline, high-pH pure culture is stirred with paddlewheels and harvested with microscreens, then spray-dried. Harvested effluent is usually returned to the cultivation ponds.

Live Spirulina, especially marine species, should not be used for larviculture. Shrimp larvae will become entangled in the coiled strands. Good quality Spirulina is dark green, dry, dusty and has a unique smell and a mild seaweed- like taste. Spirulina suitable for larviculture is available from aquaculture supply distributors as well as directly from Spirulina growers. 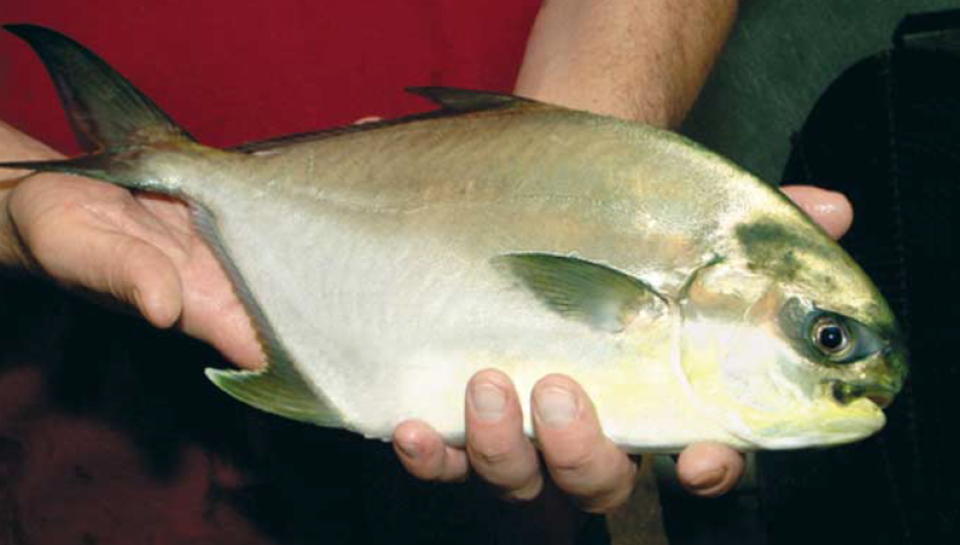 U.S. trials indicated wild-caught pampano could be feed trained and spawned in captivity via hormonal induction. Observations of fecundity, egg fertilization rates, and spawning frequency suggested that quan­tities of pompano seedstock could be produced over time. Although survival during test larviculture was low, the trials showed pompano larvae can be reared following standard commercial practices.