Abalone are single-shelled, herbivorous gastropods (mollusks) of the genus Haliotis. The most conspicuous feature of the shell is a row of respiratory pores (also called tremata) located on the left margin. The muscular foot, which is the edible part, has a strong suction power that allows the animal to clamp tightly to surfaces. Japan, where it is regarded as a great delicacy, has the longest history of culturing abalone. However, the largest market for dried abalone is China, with a long tradition of abalone cuisine. Abalone shells are sold as buttons, jewelry and inlay work.

The Philippines is one of the major producers of abalone from commercial capture fisheries. In 1996, the country’s harvest was recorded as 448 metric tons. But like other capture fisheries, abalone stocks also suffer heavy fishing pressure and their world harvest has been declining now for decades. Decreasing fishery catches and high prices, especially for export markets, have created significant interest in the artificial propagation and production in captivity of abalones.

Among the three local species, the donkey-ear abalone (Haliotis asinina) is the largest with a maximum shell length (SL) of 10 to 11 cm. Because of its extended foot, the percent ratio of meat weight to total body weight is approximately 85 percent, compared to other cultured species with a range of 30 to 40 percent. This species is dubbed the “cocktail” abalone because of its smaller shell size relative to many temperate abalone species. And an Australian scientist called it “the fastest growing abalone in the world,” because a market size of 5 to 6 cm can be attained within one year of culturing in raceways and floating sea cages using red macroalgae (Gracilariopsis bailinae) as the major food source. Wild-caught adults can be bought from gatherers in provinces around the Visayas and Mindanao regions, with prices ranging U.S. $5 to $8 per kilogram of live adults (4 to 5 cm SL).

In support of the growing interest in abalone culture, the Philippine-based Southeast Asian Fisheries Development Center/Aquaculture department has started research studies for seed production of H. asinina. Captive broodstock have been successfully bred in the hatchery since 1993. Under captive conditions, juveniles attain sexual maturity at 35 to 40 mm SL within 8 to 10 months of culture with seaweed. Males usually become sexually mature earlier than females. Both wild and hatchery-bred adults are used for breeding. Abalone spawn spontaneously in tanks year round. A 25-gram female H. asinina (50-mm SL) can spawn as much as 250,000 to 300,000 eggs per spawning, and fecundity increases with increasing animal size. However, abalone are generally asynchronous spawners, thus not all oocytes in the ovary are shed at one spawning. Spontaneous spawning coincides with the new- and full-moon phases.

Eggs (180 to 200μm) are hatched in 5-micron filtered or UV-treated seawater. The free-swimming larvae or trochophores are maintained under a static water system until the creeping stage. Creeping veligers are stocked (at up to 500 per liter) in settlement tanks with suspended, corrugated PVC panels as attachment surfaces, following the Japanese technique. Plates are filmed with epiphytic diatoms (preferably species of Cocconeis, Navicula and other prostrate diatoms) to serve as initial food sources for larvae, until the early juvenile stage. Continuous lighting using 40W fluorescent lamps installed above the tanks is needed, especially during the settlement period to prevent diatom respiration from causing dissolved oxygen depletion in the culture water.

Early juveniles (ca. 5 to 10 mm SL) are harvested and transferred to nursery baskets and fed fresh seaweed (G. bailinae). Larger juveniles (> 10 mm SL) are separated as they can cause stunting of smaller juveniles due to competition for food and space. Stocking densities vary from 600 to 1,000 per square meter, depending on animal size. Intermediate rearing lasts 80 to 90 days until the desired 30 mm size is reached. While G. bailinae is available year round, abalone juveniles can also be grown on formulated feeds with the same growth performance as with the seaweed.

A 3-cm juvenile abalone grows to the market size of 5 to 6 cm in 8 to 10 months of rearing in flow-through tanks or suspended sea cages. Abalone are adapted to highly turbulent seawater conditions, so sea cages are located in areas with strong water movement. Tank culture requires a continuous inflow of sand-filtered seawater with vigorous aeration. Rearing containers are plastic barrels with cutout windows to allow continuous water flow. Stocking densities vary from 60 to 100 per square meter of inside surface area of the cage. Abalone are fed red seaweed (G. bailinae) to excess at weekly intervals. Under tank conditions, abalone has growth rates of > 130 μm SL per day and > 180 μg per day wet weight, with food conversion ratio of 16:1 to 20:1. Survival generally ranges from 90 to 95 percent.

Abalone culture is an emerging aquaculture industry in the Philippines. The donkey-ear abalone has strong culture potential because of its ability to mature and spawn throughout the year, fast growth rates, and high survival during grow-out in both land- and sea-based culture systems. Its preferred food, the red seaweed G. bailinae, is available year round. This seaweed is farmed in abandoned, brackishwater shrimp ponds and canals. The relatively short culture period and an established export market for the “cocktail” abalone provide additional support for the selection of this species as a strong aquaculture candidate. 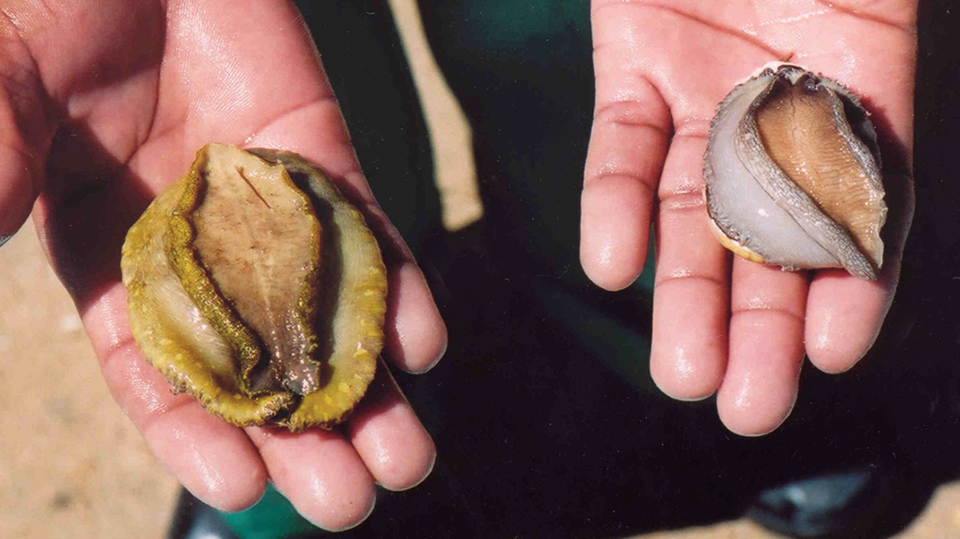 South African abalone culture is growing and many of the land-based tank production systems use wild-harvested kelp to feed the animals.