As aquaculture expands, the proportion of farmed species fed commercial aquafeeds is also increasing. Developing sustainable feed ingredients in ways that add resilience to the global food system, therefore, is a major challenge for aquaculture, but the sustainable expansion of aquafeeds requires new ingredient alternatives.

This article – adapted and summarized from the original publication – reports on research studying the replacement of fishmeal with a protein-rich and EPA-rich co-product (lipid-extracted) of another marine microalga, Nannochloropsis oculate, in diets of Nile tilapia, a globally important aquaculture species.

The experiment included employed a completely randomized design of three diets X four replicates (tanks), with 12 static-water, 114-liter cylindro-conical tanks fitted with feces settling columns. Juvenile Nile tilapia (O. niloticus) were randomly assigned to tanks at a rate of 10 tilapia per tank, with a mean weight of 30 grams per fish.

We maintained a photoperiod cycle at 10 hours light and 14 hours dark and fed them the reference diet during a seven-day acclimation period. After randomly assigning the three diets to twelve tanks, the fish were acclimated to experimental diets for seven days before initiation of feces collection. Fish were fed fish two times daily and uneaten pellets were collected directly after each feeding to minimize potential artifacts in the fecal samples. Water quality was monitored and 50 percent of a tank water was replaced if total nitrogen or nitrite reached above 3.0 mg/L or 0.025 mg/L, respectively, or twice per week. Water temperatures were kept within 27.0 to 28.0 degrees-C.

Results from our nutritional feeding experiment showed – when compared to the control diet –  good growth, feed conversion and survival of tilapia fed a diet replacing 33 percent of fishmeal with N. oculata co-product, but decreased fish performance at higher inclusion levels. These findings indicate a need to improve nutrient digestibility in order to achieve a higher replacement level. This is the first report of the effects of different inclusion levels of a micro-algal co-product in tilapia diets.

The ADC of crude protein in the N. oculata whole cells and N. oculata co-product ingredients were lower than some other commonly used proteins sources such as Spirulina, fishmeal and soybean meal. But it was higher than the ADC of crude protein in some crops used as protein and carbohydrates sources, including corn, broken rice, sorghum, wheat middlings and rice bran, which have ranged from 57 percent (sorghum) to 73 percent (corn) in tilapia. These digestibility results are promising regarding the higher digestibility of lysine, which is one of the most deficient amino acids in terrestrial protein used for aquaculture feed.

If algae biomass is produced and made available in larger quantities, it could become cost competitive or cheaper than crystalline amino acid supplementation, provided it shows adequate digestibility in the farmed animals. For Nile tilapia, we observed significantly lower ADCs of methionine in the N. oculata co-product than in N. oculata whole cells (64.1 percent vs. 88.1 percent) but higher lysine digestibility in N. oculata co-product (81 percent) compared to N. oculata whole cells (76 percent). Future research is needed to identify why ADCs for both amino acids differed between whole cells and co-product.

Our findings highlight the need to better understand how anti-nutrients in microalgal co-product limit inclusion rates in aquafeeds and to identify practical steps to improve nutrient digestibility to achieve higher replacement levels. The observed reduction in nutrient digestibility could be due to the high content of complex indigestible cell wall non-starch polysaccharides (NSPs) in the microalga.

Consistent with many aquaculture studies, we found that dietary fatty acid composition was mirrored in the fatty acid profile and composition of edible fillet tissue of Nile tilapia. Similar levels of fish oil, total omega-6 polyunsaturated fatty acids (PUFA) and total omega-3 PUFA in all formulated diets resulted in similar levels of major omega-3 and omega-6 PUFAs in fillets of fish across all the diets. This lack of difference in fillet composition suggests that tilapia utilized nutrients in the N. oculata co-product as efficiently as they used nutrients in fishmeal. Also, tilapia fed the reference diet for 84 days yielded 2.2 mg total EPA+DHA per gram of raw fillet, suggesting that the N. oculata co-product would be a good candidate for EPA supplementation in tilapia diet formulation.

Microalgae-based diets are currently in the preliminary development stage for aquafeeds. Achieving wide use of such a nutrient dense N. oculata co-product in fish feeds requires researchers to find ways to enhance nutrient digestibility. Developing highly digestible algal ingredients will both improve feed conversion ratios and reduce nutrient loads in fish culture effluents, while also helping drive algae-based aquafeeds towards cost-competitiveness with conventional feed. Towards this goal, we are now focusing on whether the inclusion of one or more non-starch polysaccharide and protease enzymes in N. oculata co-product diet enhances nutrient digestibility and retention and growth and reduces effluent nutrient loading in Nile tilapia.

The aquafeeds industry will use microalgal co-product as a nutrient source only if it is a highly digestible ingredient that improves feed conversion ratios and reduce nutrient loads in fish culture effluents. Also, microalgal co-products also must become cost-competitive with conventional protein sources for aquaculture feeds, and innovative business models by leading microalgae companies are emerging to meet this challenge.

One of the world’s leading fish nutrition experts talks about how aquaculture can learn to survive, and even thrive without depending on fishmeal and fish oil. It’ll take a lot of innovation, but Giovanni Turchini is confident that the industry is on the right path. 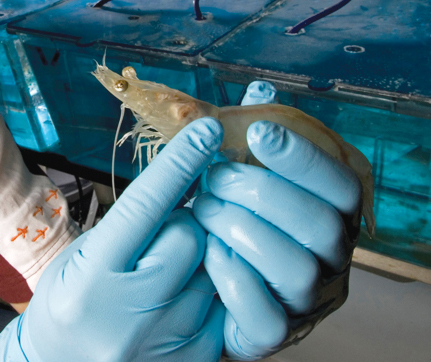 Recent research is demonstrating that biofloc-based proteins are suitable replacements for fishmeal in aquaculture diets. Since bioflocs can be produced while treating aquaculture effluents, a waste product can be converted into a valuable resource.