Thailand is one of the largest exporters of shrimp to the world market, contributing around 30 percent of the global shrimp supply. The export value totaled U.S. $1.5 billion in 2000, but decreased to $1.2 billion in 2001 due to the economic slump in Asia and the effects of shrimp diseases. Currently there are around 25,000 shrimp farmers in the country, with a total farming area of approximately 73,000 ha.

In order to sustain this major shrimp industry and maintain confidence in the safety and quality of its products, significant measures have been taken by the Thai Department of Fisheries (DOF).

The Code of Conduct (COC) project was initiated in 1998 by the Department of Fisheries to improve the sustainability and food safety of Thai shrimp. On February 19, 1999, the Code of Conduct for Marine Shrimp Culture Industry of Thailand was agreed upon and signed by stakeholders that included members of the private sector and DOF.

The COC mission states simply: “The marine shrimp farming industry in Thailand is committed to producing high-quality, hygienic products in a sustainable manner that provides environmental, social and economic benefits to present and future generations.”

The following operating guidelines and procedural manuals were prepared:

The certification and labeling of COC shrimp clearly reflects a farm-to-table approach, with the objective of providing market incentives by adding value to the shrimp and shrimp products farmed and processed under the COC program.

The COC mark can be displayed on product packages if the product is derived from a COC-certified processor, raw material buyer/supplier, and farm. Currently, DOF has approved 27 shrimp farms and three hatcheries that have successfully implemented the COC. Certification of shrimp buyers, suppliers and processors is now under way.

DOF has implemented a Control and Monitoring Program on the Use of Drugs and Chemical Agents in Aquaculture since 1997. Five DOF divisions have regional and provincial offices to conduct the routine monitoring program in 22 provinces along the coastline and major provinces for inland or freshwater aquaculture.

All aquaculture farms are required to register with the DOF for approval to begin operations. This ensures that guidelines in site selection, farm design, operational standards, and records of chemical and drug use are followed. Farm inspections are carried out to ensure that approved operational procedures and standards are properly implemented.

DOF operates 22 mobile units in the major culture areas. Each unit inspects approximately eight farms a week and rotates until all areas are covered, with each farm receiving no less than five inspections annually.

All aquaculture feed mills and commercial aquafeeds must be registered with DOF. The department does not allow any feed factory to produce medicated feed. Wholesalers and retailers of aquafeeds must acquire a license from the department. Feed formulas and labels must be approved by the DOF before sale. Feeds are subject to market and on-farm sampling for further analyses for drugs and proximate compositions.

Preshipment inspections identify possible drug residues in finished products to ensure that they are in compliance with the requirements set out by DOF as well as importing countries. Fishery officers collect samples once a month from approved processing plants, and sample at least 30 percent of the type of products produced on that day.

If the finished products are found to contain residues that exceed the established limits, the lot is rejected. The processor is required to verify its HACCP plan to identify the problem and submit appropriate corrective actions to DOF. The department then performs a follow-up inspection within an agreed time frame to ensure that effective actions have been made to address all potential problems and prevent recurrence.

In recent months, cultured shrimp products exported from many countries – especially those in the Asian region – have been banned or subjected to a 100 percent inspection by the E.U. This was because chloramphenicol and nitrofuran residues were found in imported shrimp. Although these compounds were banned in Thailand for use in food animals in 1988 and 1999, respectively, both drugs are still allowed in the country for human medical treatment.

Chloramphenicol, nitrofurans, and other prohibited compounds had not been included in DOF monitoring programs because past testing did not produce evidence of their presence in shrimp. An E.U. member country’s recent rejection of a shipment of frozen Thai shrimp due to the presence of nitrofuran residues alerted concerned Thai authorities and the industry took action.

Several meetings were urgently called, and the cabinet approved short- and long-term measures to control the antibiotic problems. Other shipments on the way to the E.U. were immediately recalled to Thailand for inspection. All remaining shipments awaiting export were subject to a 100 percent check for the drug residues.

To address the root cause of the problems, the Thai Food and Drug Administration and Customs Department strengthened controls on imported drugs. Inspection and monitoring of drug utilization are performed on retail imports. At the hatchery and farm levels, information dissemination and training for farmers are being conducted. The use of unregistered feed is strictly prohibited. Inspections of drugs and chemicals used at farm are now conducted at a greater frequency.

To ensure traceability, movement documents that detail the history of raw material is required. The documents are carried from the point of harvest through sale, distribution, and processing to export. For processing factories, material reception is considered a critical control point where a supplier audit must be performed.

Thailand also imports raw materials for processing and re-export. A health certificate is required to accompany all imported shipments, which are subject to a 100 percent inspection by FDA. If any violations are determined, the lot is rejected and the supplier is blacklisted.

DOF has already acquired and installed liquid chromatography mass spectrophotometer laboratory equipment to determine metabolites of nitrofurans in shrimp. Currently, all shipments of cultured shrimp are subject to full inspections prior to export.

If a shipment is found to contain a prohibited drug, the lot is destroyed. The processor must submit an appropriate action plan and take corrective actions. The license of the supplying farm is withheld until proper corrections have been made and further tests on their subsequent harvests are found satisfactory. The chemical supplier involved is blacklisted.

The Thai Department of Fisheries does not take the rejection of Thai products in some markets as a failure, but an important lesson to be used to improve the efficiency of its control systems. New problems may arise everyday. However, from those hard lessons, the department learns to prepare and prevent, rather than focus on problems that have already occurred. 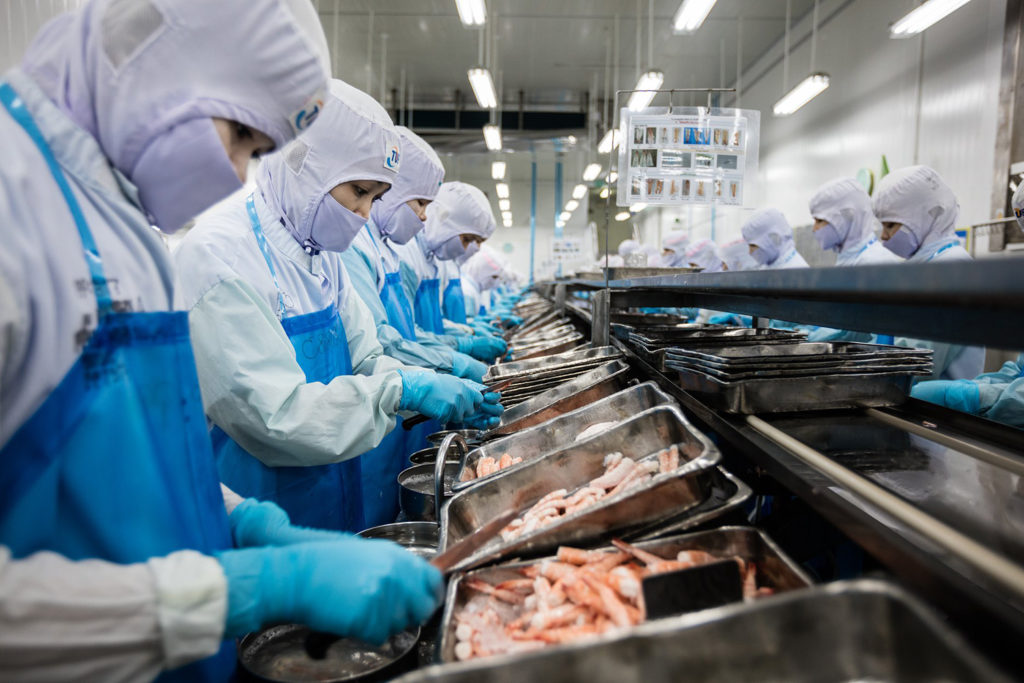 When Seafood Watch awarded Thai shrimp a yellow or “good alternative” rating, it recognized a decade of improvements. Some feel it didn’t go far enough. 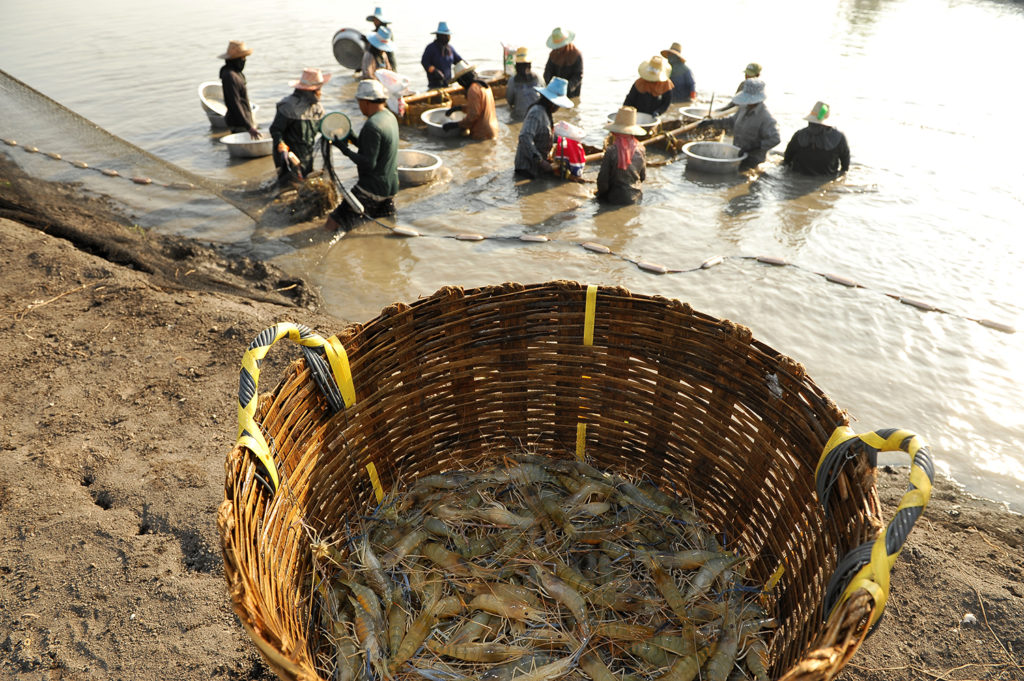 The international seafood marketplace is pleading with the farmed shrimp supply chain to control diseases that wreak havoc on the global supply chain.