Tilapia were introduced to Central America during the 1950s by Taiwanese technicians working with the Food and Agriculture Organization of the United Nations. For over 30 years, tilapia culture in the region was promoted by governmental and private agencies primarily as a means to produce low-cost, high-quality animal protein to alleviate hunger and malnutrition among the rural poor

Several fundamental errors were commonly repeated in these programs, and much of the effort to introduce and sustain small-scale fish culture in these countries initially ended in failure. An effort has since been made to provide better information to assist nongovernmental organizations and their extension agents in making tilapia culture a viable and sustainable component of rural farming.

These past attempts to promote tilapia culture were implemented by extension agents and technicians with little or no knowledge of the biology or culture techniques of tilapia.

Through the 1970s, there was little locally generated information on proper methods to successfully culture tilapia using low-cost inputs. Beginning in 1983, however, the Pond Dynamics/Aquaculture Collaborative Research Support Program played an important role in developing reliable information and simple techniques to successfully manage tilapia culture in the region.

Many fish ponds have been constructed in Central America at sites without adequate conditions for the successful culture of tilapia. Tilapia are tropical fish that grow quickly at water temperatures of 25 to 30 degrees-C. But many ponds were built at elevations above 1,200 meters, where water temperatures are generally below the optimum range during most of the year. This is not recommended.

The main factor for successful fish culture is a permanent source of goodquality water. During the last three decades, many ponds were built in locations with inadequate water resources.

The climate in Central America is characterized by distinct dry and rainy seasons. Many streams in the region are temporary, and water flow diminishes or stops as the dry season progresses from December through May. A lack of adequate water resources and proper water management limit human development and agricultural production.

Occasionally, tilapia projects are established using water diverted from potable water systems to fill ponds. Fish can be an important source of low-cost animal protein and income for rural families, but their culture should not compete directly with the basic human need for potable water.

Fish culture is not a part of traditional agriculture in the Americas. Effective implementation of fish culture activities with rural farmers in Central America requires a long-term commitment to adequate technical assistance and training.

Most nongovernmental organizations that promote regional fish culture among rural communities have limited resources for such commitment. NGO extension agents often have limited knowledge to adequately transfer the technology effectively. Many agents are relatively transitory, and their stay in a community is often brief.

Central American republics are generally poor countries with large rural populations. In many areas, theft of agricultural crops can result in tremendous losses for farmers. A widely held point of view is that fish are a common resource.

Most theft of cultured fish in this part of the world is done with cast nets thrown from the pond bank. Thieves can be discouraged from stealing by placing strands of barbed wire in the pond to entangle and damage the nets.

Several local and migratory avian species are voracious predators of fish. Herons and kingfishers can result in the almost complete elimination of tilapia fingerlings from unprotected ponds. The red varieties of tilapia are more visible in the pond water, and especially susceptible to the attack of these avian predators.

Although commercial bird netting is prohibitively expensive for use on small projects, strands of plastic string or twine suspended above the water can deter birds from visiting pond banks. Farmers are also advised to stock Nile tilapia in their production ponds. The more darkly pigmented Nile fish are less visible to avian predators than the red varieties. Rural fish ponds should be constructed close to family residences to facilitate the culture and protection of the fish.

Rural farmers have limited resources, and the availability of fingerlings at reasonable prices has often limited aquaculture development. Sources for tilapia fingerlings in most Central American countries are ordinarily limited to a national fish-culture station and a few private farms.

Fingerling production at the El Carao station often exceeded 3 million annually during this period. The station supplied fingerlings at subsidized prices to promote fish culture in the country. These subsidies may have limited the production and distribution of fingerlings from private sources in Honduras during many years.

The development of simple and straightforward techniques could help rural farmers produce and distribute tilapia fingerlings for sale locally. These fish could be reproduced on the farm with minimal care and management.

The most important step in the successful grow-out of tilapia in static water ponds is establishing a monosex population of fish. When mixed-sex culture is attempted, the resulting reproductive effort of the fish overpopulates the ponds with fry that compete for food and space with the original stocked fish. This results in harvests of small fish, mostly less than 50 g, which are of little value in local markets.

There are several techniques to reduce the effects of the unwanted tilapia reproduction in grow-out ponds. In Central America, farmers stock “guapote” (Cichlasoma managüensis, a peacock bass), a native piscivorous cichlid, with the tilapia fingerlings in polyculture. Guapotes are effective predators of the tilapia fry, and can be harvested and sold with the tilapia at the end of the culture cycle.

To avoid unwanted reproduction, attempts are made to stock only male fish in grow-out ponds. Farmers can differentiate between male and female tilapia through visual inspection of their genital orifices, but this technique has to be learned and continuously practiced by extension agents and local farmers. Grow-out of females is not recommended. Female fish can be utilized as future broodstock, consumed by the family, or fed to household animals.

Rural farmers in Central America have scarce resources for use in production. Tilapia can be grown successfully using agricultural byproducts (rice and wheat bran, and many types of animal excrements) as the primary source of nutrients for the fish. The Pond Dynamics/Aquaculture Collaborative Research Support Program has generated an enormous amount of experimental data from sites around the world on the use of organic fertilizers in the production of tilapia.

Tilapia fingerlings can be grown to market size of about 225 grams live weight in six months by applying chicken litter to ponds at up to 1,000 kg dry matter per hectare per week. These ponds are generally stocked with two or more male fingerlings per m2 of pond surface area. Farmers can think of organic fertilizer as a substitute for formulated fish feed, adding it to ponds each day and spreading it across the water surface.

Several simple techniques can help manage ponds and gauge fertilization rates, and avoid unwanted problems with low concentrations of dissolved oxygen and possible fish mortalities. These techniques involve periodic evaluations of the turbidity of pond waters and daily observation of the fish “piping” in the early morning hours of the day.

One advantage of using floating pellets is that farmers can easily evaluate feed consumption by the fish, but due to their coloring, red tilapia are more prone to loss from avian predation than darker Nile tilapia; manufactured feeds are generally not recommended among rural tilapia farmers in Honduras.

Most rural farmers in Central America sell their fish live on the pond bank. This eliminates any processing and transport costs from the production budget and contributes to the profitability of this activity regionally.

Live tilapia are sold for U.S. $1.00 to 1.25 per pound in rural areas of Honduras. This profitability will be the primary incentive to continuing fish culture in the region. In order to have enough fish for sales, each family is suggested to culture tilapia in a minimum of 300 m2 of ponds. Regionally, prices for fresh fish increase during the weeks of Lent and Easter each year. Fish harvests should be programmed to take advantage of this seasonal increase.

Small-scale fish culture can form an important part of the production activities on rural farms in Central America. Fish are excellent sources of low-cost animal protein, and provide income from sales to neighbors. Although much effort to promote tilapia culture in the region has not resulted in major positive impacts, these fish can contribute to improving the lives of rural families. Anew wealth of information will assist in training local farmers in the basic techniques required for successful culture of tilapia. 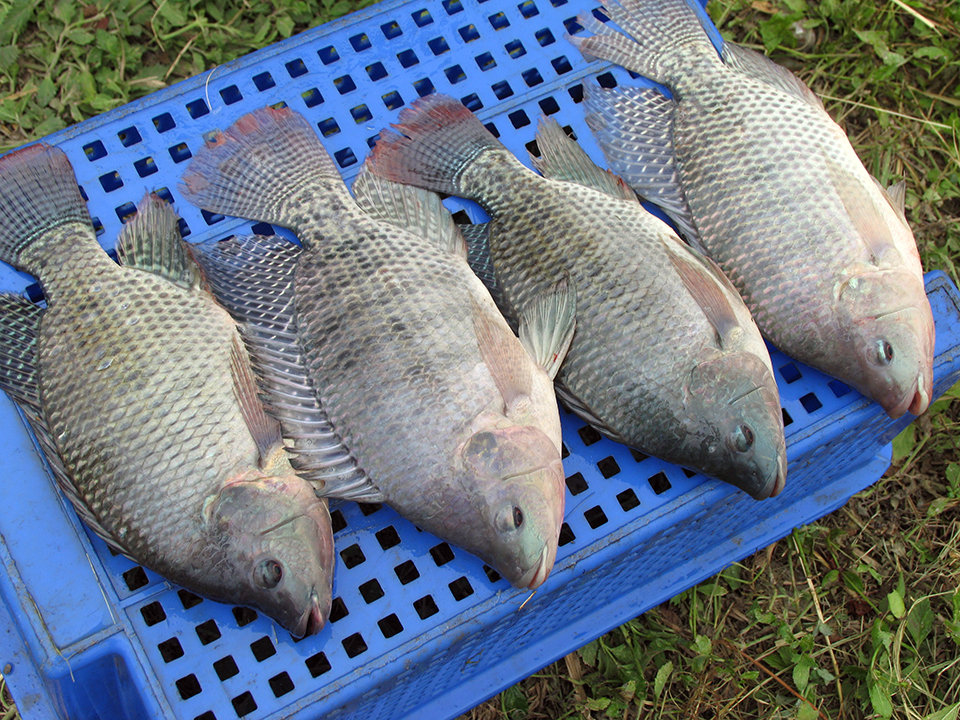