Collaboration with Lyons Seafood, GAA, University of Stirling finds success without removing the eyestalk, considered by some as cruelty

Removing the eyestalk of broodstock female shrimp helped fuel the explosive growth of commercial-scale aquaculture over the past quarter-century. A collaboration led by a Central American shrimp farmer has shown that producing shrimp at great volume, without ablation, is possible without the feared drop in production and increase in cost.

Moving away from the practice should also ease growing animal welfare worries. The surgical removal of a crustacean’s eyestalk, known as ablation, is standard practice in shrimp hatcheries worldwide. The eyestalk of a shrimp contains a complex of glands that influence molting, sexual maturation and spawning processes. Cutting it was one of the most important developments in the commercialization of shrimp farming in the 1970s and 1980s: Broodstock females with ablated eyestalks matured faster and released 10 to 20 times more eggs.

“Because of its effectiveness, use of ablation has been a standard practice in hatcheries around the world for the last 25 years,” said Jeff Fort, who is COO and CFO of the Global Aquaculture Alliance (GAA) and a farmed shrimp producer. Spawns are not only more productive after ablation, Fort said, but also more frequent.

A growing number of consumers in the United Kingdom, however, consider the practice of ablation to be cruel, despite evidence that the shrimp are not stressed by the procedure and return to feeding quickly thereafter.

As shrimp farming continues to work on best practices and improvement, the ability for hatcheries to reduce the reliance on ablation techniques would be a welcome development.

Lyons Seafoods, one of the leading U.K. suppliers of freshly cooked prawns to the retail market, collaborated with Central and South American shrimp farmer Seajoy to see if ablation could be avoided. Estelle Brennan, head of sustainability for Lyons, said the company was happy to support research to show that ablation is not required. The work at Seajoy, she said, is a “breakthrough in animal welfare.”

Bradford Price, VP of operations and sales at Seajoy, told the Advocate that a non-ablated component would eventually be a requirement for organic certification, so they started separating non-ablated females at their larvae production laboratories two years ago.

“It’s about animal welfare at this point. Lyons is very interested in animal welfare as well,” said Price, adding that the company’s shrimp has been certified organic for the past 10 years by Natürland, a certification body based in Germany. “It’s really possible and we can make a difference. But we didn’t think it would happen so quickly. We set aside a few tanks to play with, to get a feel of how far we were away from commercial viability.”

Because of the expected drop in production, Seajoy adjusted the male-female ratios and increased the number of broodstock females to compensate. It worked.

“We did not expect it to be as easy as it was,” he said. “Although the team that runs the maturation has worked extremely hard fine tuning the [process], they can’t believe the results.”

Their efforts were so successful that 100 percent of Seajoy’s shrimp being produced in Honduras and Nicaragua are ablation-free in 2016. Price said those shrimp are not yet on the market.

Seajoy, Lyons, GAA and the University of Stirling in Scotland are now collaborating on a project that will validate all of the benefits of going ablation-free.

“As shrimp farming continues to work on best practices and improvement, the ability for hatcheries to reduce the reliance on ablation techniques would be a welcome development,” said GAA’s Fort, who is also the owner of Delta Blue Aquaculture, an Arizona-based company that produces shrimp in Mexico.

Simao Zacarias, a Stirling doctoral candidate from Mozambique, was selected by the school to carry out the research.

“It’s a great idea to have a candidate come in and validate what we’re doing. When he finishes, he’s going to come out with some powerful data that says we need to look at non-ablated animals,” said Price. While producers’ emphasis is typically focused entirely on production, he added, animal welfare often gets lost along the line. That’s clearly not the case any longer. “Welfare is a larger issue,” he said. 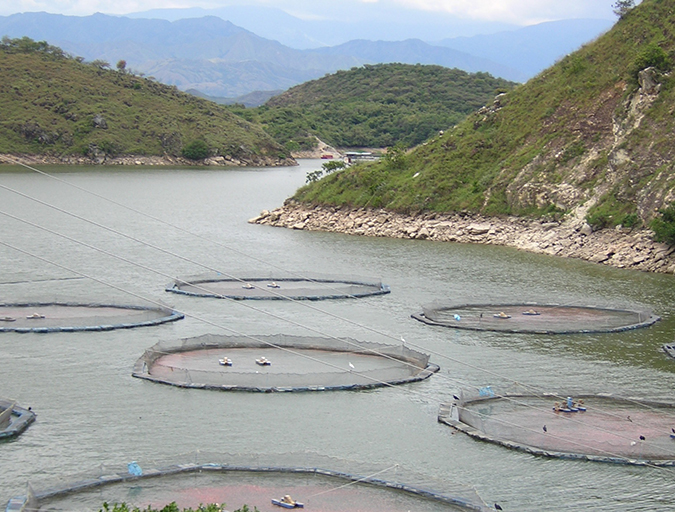 Colombian aquaculture production and exports have grown significantly during the last two years, due to a large degree to the efforts of the industry and the producers’ guild, but FEDEACUA has had an instrumental role supporting producers to achieve various industry international certification standards.