Recirculating aquaculture system (RAS) technology that incorporates intensive tank-based systems that recondition and reuse water continues to be the subject of considerable research and capital investment worldwide. While the creators of RAS predict this technology will become more widely used as grow-out systems for the developed world, today’s aquaculture industry is rapidly adopting these technologies for hatchery, nursery and advanced nursery applications. These facilities can significantly expand the productive capacity of traditional pond and net pen systems that currently serve as the backbone of today’s aquaculture industry.

At the same time, there has been parallel development of aquaponics technologies to grow fish and plants together. These aquaculture production systems are generally simple in design and seek to utilize the dissolved nutrients that are generated in fish production.

A good example of aquaponics is the system design created over the past 25 years by Dr. Jim Rakocy at the University of the Virgin Islands. Often referred to as the UVI System, it utilizes shallow raceways with floating Styrofoam rafts to support the plants that grow on clarified effluent from the fish culture tanks.

The plant systems can be in a greenhouse enclosure or outside, depending on the climate of the production location. The fish tanks are generally in a shaded or enclosed area. A rule of thumb for these production systems is that the plant production area should reflect about five to seven times the size of the fish production area to remove the available nutrients. Solid wastes produced by the fish are removed from the effluent water with simple settling or screening components.

Rakocy determined that to create a balanced system, the operator can add 60-100 g feed/day to the system for every square meter of plant area. Assuming a 1.5:1 feed-conversion ratio, a facility with 100 square meters of plants in raceways would produce approximately 1.4 to 2.4 metric tons (MT) of fish annually. The typical UVI system can annually produce approximately 5.0 MT of tilapia, as well as 1,404 cases of head lettuce, 5.0 MT of basil and 2.9 MT of okra.

An example of a greenhouse-based aquaponics system has been developed by Dr. Kevin Fitzsimmons at the University of Arizona in Tucson, Arizona, USA. As with the UVI system, the Arizona system also blends low-density, tank-based fish culture with the floating raft culture of commercially valuable plants.

In both indoor and outdoor aquaponics systems, the output and value of the plants usually far outweigh the production and value of the fish generated. Growers often comment that the fish production generally serves only to provide nutrients for the valuable plants being produced. So, given the long history of the development of aquaponics systems, why has the technology not been more widely adopted? This comes at a time when RAS technology is finding its way into more and more applications in the commercial production of finfish.

One issue that continues to burden current RAS producers is the need to treat and dispose of effluent water. In a rural farm setting in a moderate climate, water and solid wastes are applied to land and traditionally farmed crops. However, in colder climates or more urban settings, the disposal of nutrient rich effluent can be costly.

Recently, there has been a move to combine the latest in RAS technology with the time-tested floating raft culture of plants. These blended systems have been developed to take advantage of the highly productive nature of RAS with the nutrient-removal capabilities of the floating raft plant culture.

The systems are not usually balanced. More nutrients are produced by the fish than can typically be removed by the plants, but the organisms’ convenient linkage allows operators to produce the amount of fish required with as many plants as care to be grown. What is required is that the RAS technologies have some waste-treatment capabilities for wastewater or disposal options to remove the excess nutrients from the systems.

A recent example of these blended systems can be found in the Hamm’s Brewery conversion project being conducted by Urban Organics of St. Paul, Minn., USA, in cooperation with Pentair Aquatic Eco-Systems. The project is located in a well-insulated building dating from the late 1800s that sits in an urban environment and consists of four floors totaling 4,700 m2 of production space.

Since there is no natural sunlight in the building, artificial lighting provides lighting and day-length control for optimum plant growth. Additionally, to maximize the utilization of this urban space, three tiers of plant trays with floating Styrofoam boards and fluorescent lights are used. Floors 2, 3 and 4 will have five fish culture tanks each.

The fish tanks are circular, one-piece polyethylene tanks with a working volume of approximately 12.5 m3 each. A circular flow is induced by a vertical manifold in each tank, and waste solids are efficiently removed by dual-drain particle traps in the center. Water flows by gravity to a drum-screen filter, then onward to a two-stage moving-bed biological filter. Water from the second moving-bed filter sump is pumped by two, 3.0-kW, variable-speed, constant-flow pumps through three, 150-watt ultraviolet filters, an air-to-water heat pump and a down-flow oxygen saturator at each tank.

In most RAS facilities, humidity becomes a problem within the building. Most operators deal with this issue by ventilating the air space. Doing so solves the problem but wastes the latent heat that causes the humidity. In the Urban Organics facility, the air-to-water heat pump reclaims the latent heat caused by evaporation in the tanks, moving bed filters and evapotranspiration by the plants, and returns it to the fish system water, thereby cooling and drying the air in the grow-out facility.

A third variable-speed, constant-flow pump links the RAS fish culture system with the plant-growing trays, which are 18.3 m long x 1.2 m wide x 15 cm deep. Water pumped from the second biofilter in RAS system flows at a depth of 10 cm though the length of the trays under the Styrofoam boards. Water is collected from the end of each tray and flows by gravity to the inlet of the first moving-bed biofilter. During harvesting, the water from each tray can be diverted to flow back through the drum-screen filter.

Twenty 250-watt T-5 fluorescent lights are mounted above the length of each tray. Nutrient concentration, particularly nitrogen, is reduced in the flow past the plants. Fine suspended solids are also captured, thereby clarifying the water further.

The only water leaving the combined systems is the waste water from the drum-screen filter and the sludge collected in the sludge collectors. Waste water from the four floors will be collected in the basement of the building, where solids will be removed, and a portion of the clarified effluent will be ozonated and ultraviolet-sterilized for use back within the system. The balance of the clarified effluent will be discharged to the domestic sewer with a minimal load of dissolved nitrogen and phosphorus.

When in full operation, the entire facility is estimated to produce 28 MT of fish and 115 MT annually of lettuce and other leafy greens. The goal of this project is to bring together the best of both RAS and aquaponics technologies to satisfy the local urban demand for organic produce and fresh fish.

Aquaponics systems are sustainable food production systems that symbiotically combine the cultivation of plants in water with the culture of aquatic species in tanks or raceways. Recirculating aquaculture systems have been broadly defined as self-contained food-farming systems with minimal water exchange that internally recycle water and nutrients, and use biological and mechanical water filtration.

These systems allow for reduced water usage and efficient production of a variety of aquatic species, improving waste management and nutrient recycling. As relatively young industries that encompass very simple to extremely complex food production systems, they will undoubtedly have a significant and growing relevance as the world’s population grows and requires significantly expanded food supplies from new and innovative sources.

This study evaluated the performance and production of channel catfish and freshwater prawns and three varieties of lettuce – American, Romaine and Rose – in a research aquaponics system. 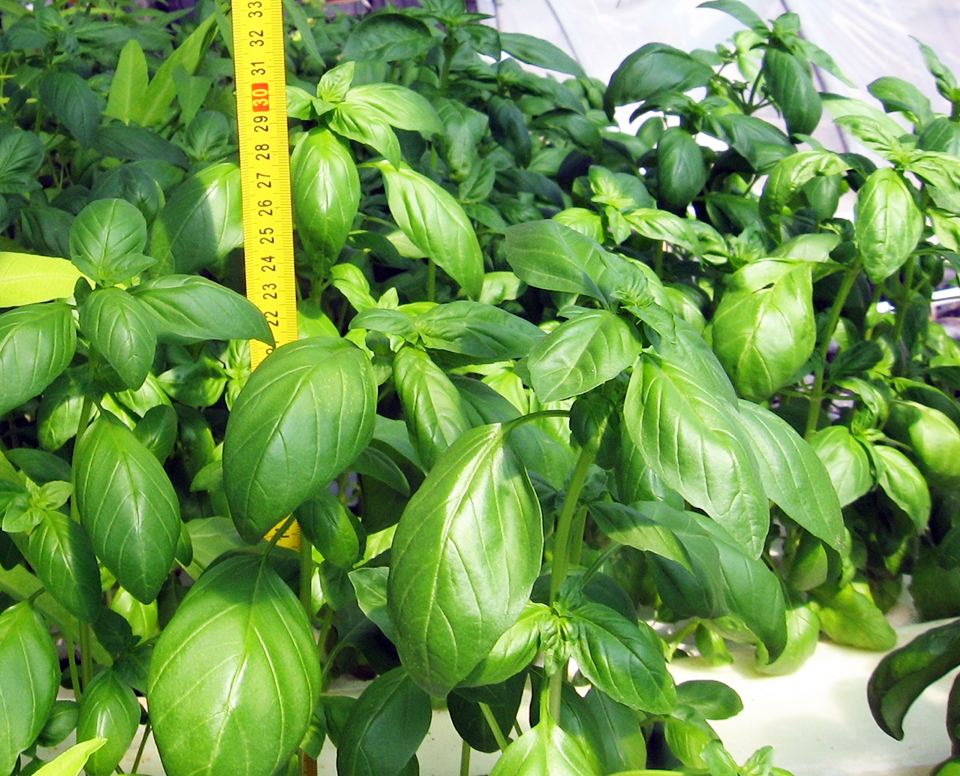