Interest has renewed in multiphase shrimp production, where shrimp postlarvae (PL) are stocked in intensive raceway tanks during a short nursery phase before stocking in grow-out ponds. In reporting the results of the Global Shrimp OP: 2001 survey on shrimp nurseries, Harvey Persyn and Randall Aungst said the main advantages expressed for using nurseries were to shorten the production cycle in the hatchery and on the farm, regulate the flow of PL from hatchery to farm, and improve pond survival by stocking older, more robust PL. Several studies have confirmed that a 15 percent or higher improvement in pond survival is generally obtained by implementing a nursery phase.

In Asia, shrimp culture is characterized by a high degree of specialization. Some nursery operations are specialized in rearing PL to desired sizes, which delays exposure to potential pathogens in ponds. Additionally, PL held in nursery tanks generally show more advanced gill development, which is important for acclimation to farm conditions.

In the Americas, nurseries are mostly used in intensively managed production systems for better facility utilization and biosecurity. In temperate climates, indoor raceway systems head start seedstock in the spring and allow the production of two shrimp crops per year.

The greatest operational expense in nurseries is the initial cost of the PL, so their survival rate is critical to profitability. According to Wickins and Lee (2002), at least 50 to 70 percent survival is required. This, however, can only be obtained with careful management and optimal feeding practices.

In the 2001 GAA survey, participants in Asia and the Americas most frequently fed artemia nauplii and biomass, and formulated nursery diets. Some hatchery operators continued feeding algae during the nursery phase, because apart from being of nutritional value, it helps in coping with nitrogenous wastes at high stocking densities and high feeding rates.

Recently, a complete raceway diet developed by INVE Technologies NV was tested in the high-density culture of Pacific whiteleg shrimp (Litopenaeus vannamei). Diet RW+, with 48 percent protein and 13 percent fat, was fed to shrimp in 500-liter tanks with four replicates per treatment. Table 1 shows the composition of RW+.

In the first two-week trial, the RW+ diet was compared to shellfree artemia (dehydrated, decapsulated artemia cysts), an acclimation diet (AD) with 40 percent protein and 13 percent fat, and a commercial diet (Com1) with 50 percent protein and 10 percent fat. Every diet was fed at 100 percent of the feeding regime. Animals at stage PL10 were stocked at high density (25,000 per square meter) and harvested at PL25. The diets were administered in six daily rations for total feeding rates that gradually increased from 35 grams per metric tons (MT) per day to 75 grams per MT per day. Water temperatures during the trial averaged 26 degrees-C.

The shellfree artemia sink fast and have a particle size of 250 µm, and thus are not suitable for mysis stages. However, they are an excellent feed for benthic PL and can be used for partial or total replacement of artemia nauplii. The shell-free artemia, which are actually artemia embryos with 30 to 50 percent more energy than newly hatched nauplii, are potentially more nutritious for feeding. Survival rates of the test treatments fed the artemia were 89 percent in trial 1 and 98 percent in trial 2 (Figs. 1 and 2).

The good performance of the artemia product was related to the retention of its nutritional value after rehydration in water. It leached very low levels of soluble protein and carbohydrates in comparison to the artificial diets. However, as confirmed by the results of trial 2, growth was generally only moderately good, probably due to the relatively low levels of essential omega-3 fatty acids in the cysts.

The performance of RW+ was generally up to the standard of the artemia product. In trial 1, survival and growth rates were similar with both. In trial 2, survival with RW+ was lower than with artemia, but growth rate was higher. In any case, survival rates with RW+ were considerably higher than typical critical levels for profitability. The final yielded biomass of 1.7 kilograms per MT (Fig. 3) was similar with both RW+ and the shell-free artemia.

In comparison to treatments Com1 and Com2, RW+ provided similar or higher survival rates and significantly higher growth rates. As such, the nursed juveniles reared with RW+ were larger than the animals from the other treatments. The total yielded biomass measured in trial 2 with RW+ was twice that of the Com2 diet. The good performance of RW+ at super-high stocking density was exceptionally rewarding. Normally, nursery tanks are stocked at 500 to 5,000 PL per square meter to obtain acceptable growth rates.

The acclimation diet was a supplement for shrimp PL used to increase the stress resistance of the animals just before and during their transfer to grow-out ponds. Designed to partially replace artificial diets and provide a boost of immunostimulants and vitamins, the supplemental diet does not sustain optimal growth when fed at 100 percent of the feeding regime. This was confirmed by the moderate growth rate obtained with this product in trial 1.

In trials, a newly developed stand-alone raceway diet designed for use in semi-intensive, intensive, or super-intensive raceway systems was the first dry nursery diet shown to ensure good performance at stocking densities up to 45,000 per square meter. In reducing costs and improving the operating efficiency of shrimp hatcheries, its development is an important step in the successful implementation of the nursery phase of shrimp production while meeting the expectations of shrimp growers willing to pay higher prices for large, robust nursed juveniles that perform well in grow-out. 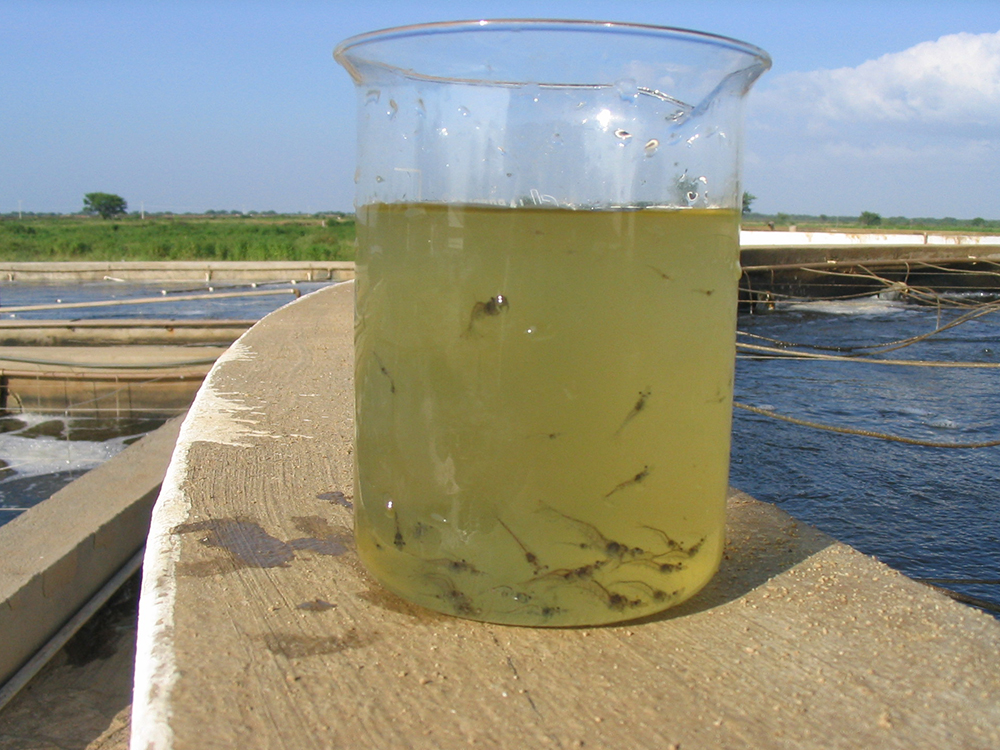 Hyper-intensive nursery systems for juvenile shrimp production present significant opportunities for shrimp farmers to increase profits. Nursery culture results in strong, healthy and uniform juveniles with great potential for compensatory growth when stocked in production ponds. Nurseries produce a maximum number of juveniles of a desired weight, and their use can reduce production costs by shortening time in growout ponds and increasing pond efficiency through additional cycles per year.