Lobster cage culture has great potential in Indonesia, which has 5.8 million km2 of marine area, 17,504 islands and 81,000 km of coastline. Many of its lagoons and bays are suitable for cage culture, although the area currently utilized is small.

Lobster culture in eastern Indonesia began at West Nusa Tenggara (Nusa Tenggara Barat) in 2000 as a by-product of seaweed and grouper culture, which had been in operation since the 1990s. Swimming pueruli, the final larval stage of lobsters, and juvenile lobsters were often observed settling on the floats, cages and other materials associated with seaweed and grouper culture. They were captured by hand and retained in separate cages, in which they grew well. Thus was born lobster aquaculture. The total industry presently consists of about 1,000 small-scale farm units.

There is considerable variation in raft and cage design, reflecting the novelty of the industry and its early stage of development. All cages are supported on floating rafts 100 meters or more off the beach. The systems used vary from simple structures fabricated of bamboo to better-engineered platforms made of milled timber. Floats consist of plastic or steel drums, some of which are covered in canvas, presumably to reduce corrosion.

Rafts vary in dimension but typically measure 8 x 8 meters and up to 16 x 16 meters. Rectangular cages are supported within the rafts in a grid pattern of varying specification. Cages vary in size from 1.5 x 1.5 x 1.5 meters up to 4 x 4 x 4 meters, depending on species and the size of the stock

Cage nets to hold lobsters are cubic in shape and made of nylon fishing net with mesh sizes less than 12 mm. Larger cages tend to be fabricated with larger mesh sizes, although none is larger than 20 mm.

A separate seed-collecting sector appears to be developing, although presently, most seed is captured by the lobster farmers and used directly in their own growout cages. The methods of collection vary and can be separated into those targeting the swimming puerulus stage and those targeting the larger juveniles.

Many pueruli are collected as a by-product of a light trap used for catching fish. These traps, known as bagang, are common along the coastline and consist of a bamboo frame structure secured to the sea floor by posts or moorings, and supporting a rectangular net that is lowered by rope to the sea floor.

They are deployed at night, and a lamp is lit over the trap to attract fish. The lamp may be powered by kerosene, oil or electricity supplied from a small generator. The trap is raised four times through the night to retrieve fish, and pueruli are often caught, as well. Many of the fish are used for direct human consumption, but those deemed unsuitable for this purpose are used as feed for lobsters and grouper. Now that lobster aquaculture is growing, more attention is being paid to finding pueruli within the bagang catches, and capacity could be built very quickly.

There is also considerable use of shelter traps for swimming pueruli. These bundles of mesh material are hung into the water from rafts. Pueruli settle onto the mesh, which is generally inspected every second or third day. A raft with 25 to 50 bundles can generate up to 100 pueruli at a time, although the average catch per retrieval is around 20 larvae. A small number of pueruli are also caught as they settle on the cages and floats of the rafts. These are collected by hand as they are observed.

Availability of pueruli is seasonal with a peak catch rate during November and December. This suggests that the source of the spawning stock that produces the seed is located north of Indonesia, where summer breeding occurs in June and July. Catches are relatively higher during periods of new moon.

Juvenile lobsters are collected in much smaller numbers, but are more valuable, as they are more robust and more likely to survive. There doesn’t appear to be a targeted catching method, and lobsters are taken as a by-product of other fishing activity, particularly seine netting in the shallows off the beach. Juveniles observed on the floats and cages of the rafts are collected as they are observed.

In some areas, seed is collected for subsequent sale to lobster farmers. In addition, some farmers collect more than their facility can accommodate and sell the extra larvae to other farmers. The price of transparent seed is about U.S. $0.27/lobster. Lobsters with a 25- to 50-mm size cost $0.46-0.64/piece. Depending on their size, juveniles cost about $0.97 each.

Lobster growout involves periodic grading, generally at three stages: a nursery phase from puerulus to 2 cm total length, a juvenile phase from 2 cm length to 50 to 100 g and a growout phase to market size of 200 to 300 g for P. homarus and 300 to 500 g for P. ornatus.

The puerulus phase is characterized by its short two- to four-week duration and high mortality. No particular husbandry is applied at this stage. The pueruli are housed in small cages of about 3.5-m3 volume, stocked at up to 100 lobsters/cage and fed finely chopped trash fish. Juveniles are transferred to larger cages of up to 9 m3 at densities up to 20/m3. They, too, receive a diet of trash fish. In turn, larger juveniles of around 100 g are transferred to larger cages for growth to market size at densities up to 10/m3.

Some seaweed may be placed in the cages to provide refuge, although it is unlikely to be very effective and indeed may be consumed by the lobsters. Its effectiveness, if any, would be more important for the puerulus to juvenile phase. Shading over the cages using palm frond thatching or synthetic shade cloth is common.

P. homarus mature at a size of 200 to 300 grams, and growth slows significantly beyond 300 grams, so further growout would be unprofitable. Furthermore, P. homarus fetch a maximum price of around Rp 150,000 (U.S. $14)/kg at market. In contrast, P. ornatus don’t mature until a size well in excess of 1 kg, at which it receive its maximum price.

However, at Lombok, P. ornatus are harvested at a maximum size of 500 grams, which attracts a price of about U.S. $12/kg. There is a clear opportunity to increase farmers’ income by educating them about the value of growing P. ornatus to larger sizes. 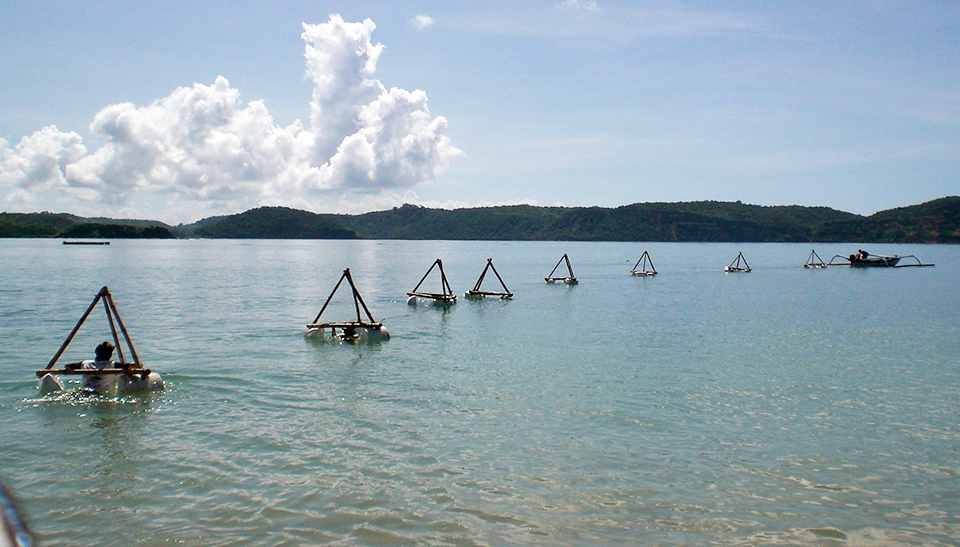 Although lobster farming is already established in Indonesia, improvements in feed and nutrition, and seed collection would help the industry expand. The diet of trash fish fed to developing lobsters generates waste and is not conducive to good hygiene or growth. 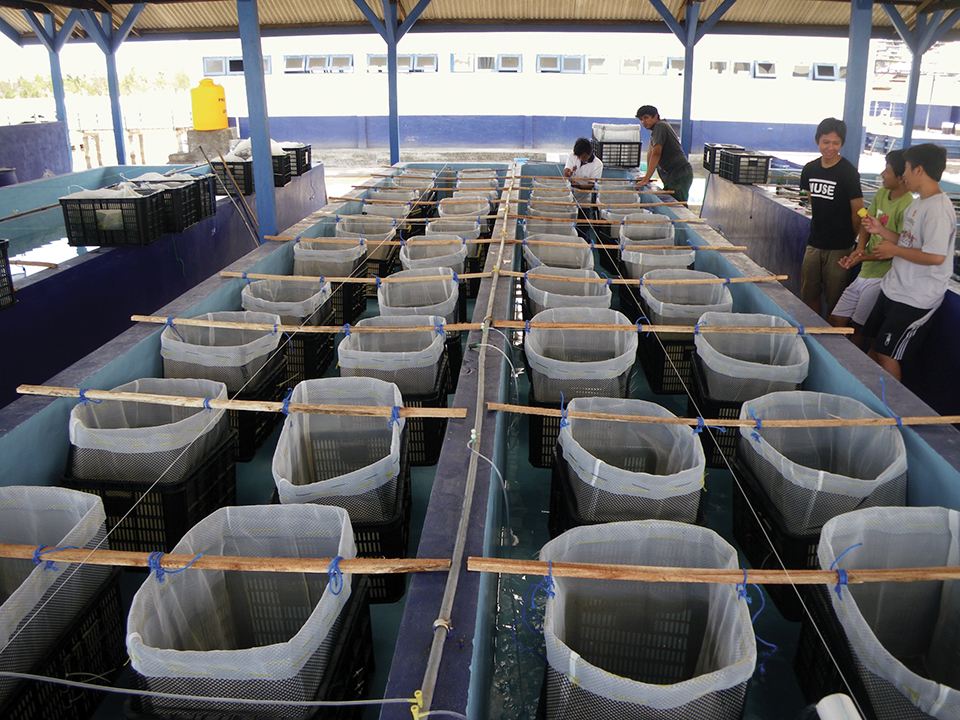