Oita Prefecture in southern Japan produces the most flounder in the country. Thanks to an innovative new grow-out technique, it might grow even more.

That’s because a new light source – green LED light – is being deployed there. Under the green-colored light, flounders tend to grow heavier faster, while the different wavelengths of light appear to modify the release of melanin-concentrating hormone (MCH), an appetite regulator in the brain, prompting the fish to eat more.

“We conducted some experiments with barfin flounder (Verasper moseri) in different tanks,” Dr. Akiyoshi Takahashi of Kitasato University near Tokyo told the Advocate. “Those reared in light tanks grew faster than those in dark tanks. We wanted to see if particular wavelengths would affect growth and examined the effects of blue, green and red light, corresponding to the primary colors. Green appears to show the highest effect.”

“We believe that the endocrine and nervous systems stimulate growth under green light but we don’t know any specific details,” said Takahashi. “MCH does have an impact but doesn’t seem to be the central hormone. We have experimented with rainbow trout, red sea bream and yellowtail but green light doesn’t appear to have much effect. Other research shows that blue light is effective when rearing longtooth grouper (Epinephelus bruneus) at low temperatures, so we may need to identify the most effective color for different species. Different irradiation methods, such as only using green light during feeding, may be worth trying. We also understand that green light penetrates the depth at which flounder live in the wild, which is why green may work particularly well for them.”

Green LED light is now being deployed in flounder farms in western Japan, while trials with barfin flounder are underway in northern Japan and with spotted halibut in northeast Japan. It is also being used in rearing prior to the release of spotted halibut fry for restocking purposes. Takahashi believes that it can bring various benefits to farms.

“Under green light, the weight of flounder increases 1.6 times faster than standard rearing methods, so farms can reduce their rearing period and ship their produce earlier,” he said. “In turn, electricity and labor costs can be cut. Further research is required but because of better feed efficiency, it may also be possible to save on feed costs.”

Light exposure is an important environmental factor that has long been used to drive biological processes, thereby influencing fish performance and affecting production. With more fish species being reared indoors in highly controlled systems, aquaculture is now more reliant on artificial light sources. Incandescent, fluorescent and halogen have long been the traditional choices, but according to Dr. Juliette Delabbio, principal at Farm Biosecurity International, LED lights offer better control over the three elements of environmental lighting – photoperiod, light intensity and color – while their initial cost is offset by substantial long-term energy savings.

“The focus of design for an indoor lighting system is not just about enhancing fish performance through photoperiod control,” said Delabbio. “LED lighting systems provide a way to manipulate different aspects of indoor lighting that were not practically accessible with traditional lighting systems. They allow easy manipulation of light intensity and spectrum. These two elements can be designed into a lighting system so that they can be enhanced, changed or removed in line with the development and needs of a particular species.”

LED light is also the focus of research in China. Scientists there say that white light encourages growth in the seaweed species Ulva pertusa and Sargassum fusiforme while maintaining protein production at a constant level. Because of its biochemical structure, seaweed has different absorption preferences for different wavelengths of light, which makes it possible to encourage growth by providing light in a specific wavelength range. LED lighting also provides a monochrome light source more efficiently, says Dr. Xi Xiao of Ocean College at Zhejiang University in China.

“In the emission spectrum of white LED, there are two obvious peaks in the blue and green light bands,” said Xiao. “Outside the green light, the emission light intensity decreases gradually with the increase of wavelength. Such a spectrum means that white LEDs can provide a relatively comprehensive lighting environment. White light is more likely to promote the growth of seaweed that prefers blue-green light. However, for species that prefer red light, the red part of the white light spectrum is relatively weak, so growth may not be encouraged so obviously.”

With so much variation in the natural habitat of cultured species and how LED lighting can manipulate light spectrum and intensity, there is great opportunity for improvements in lighting systems to substantially increase fish health and performance, said Delabbio. Providing the optimum lighting in an indoor setting is complex, she noted, but with LED lights, systems can be custom-designed to consider the stage of a fish’s development and elements of the rearing environment such as tank background and water depth.

With green light, farms will be able to produce fish more efficiently and save on costs.

“As an example, most larval fish are extremely sensitive to rearing conditions,” said Delabbio. “Their eyesight changes during development, which affects their feeding capabilities. Incorrect lighting can reduce their success rate for capturing feed and affect their survival. As the researchers in Japan have noted, the light in a fish’s natural environment is the light under which it is most comfortable. This is also important, and all three elements of light – photoperiod, intensity and spectrum – must be taken into account during rearing.”

“Different algae have different color preferences and the physiological effects of different colors on the same kind of algae may also differ,” agreed Xiao. “If light intensity is too weak, it may have no obvious impact on growth. If it’s too strong, it may be a waste of resources. We must select an LED light source that fulfills the specific needs of the species in question.”

Back in Japan, hopes are high that green light could play a role in the recovery of northeast Japan, which was devastated by the 2011 earthquake and tsunami. As part of a collaboration with the Japan Fisheries Research and Education Agency, Takahashi and his team are working in the affected regions. A decline in the number of fishermen has hit the regions hard, while fish catches, including chum salmon (Oncorhynchus keta), a key species in the area, are also low. Before the disaster, there was almost no fish aquaculture in northeast Japan but to revive the region, work has begun to rear salmon offshore. On land, meanwhile, spotted halibut could have potential.

“With green LED light, farms will be able to produce fish more efficiently and save on costs,” said Takahashi. “We hope to attract visitors by promoting the disaster areas as special production areas for spotted halibut. The fish is a key species in sushi restaurants, and we may be able to offer a steady supply to the cities.”

“If green light can also raise the production value of more expensive fish like puffer fish or sturgeon, farms will make a decent profit, and if we can eat such fish at a lower price, Japan’s culture of eating fish will undoubtedly spread further,” he continued.

Takahashi and his team believe that green light can be deployed just as effectively on flounder farms in other countries and improve feed and production efficiency overall. Going forward, green LED light will be used further to unravel the mechanism behind growth stimulation in flounder and increased food intake. Work is also underway to investigate the connection between growth and physiological mechanisms that respond to light, such as circadian rhythms, also known as biological clocks. 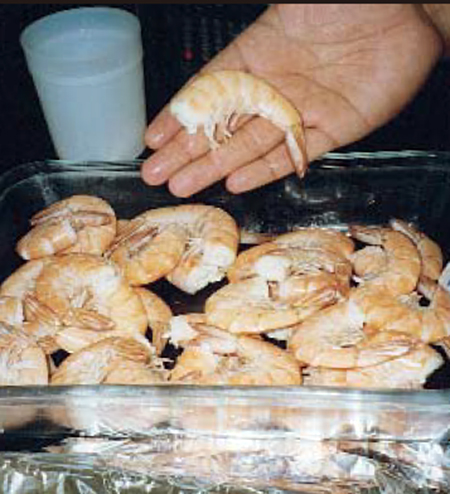 Grupo Granjas Marinas built a shrimp-cooking facility adjacent to its processing facility in Honduras and replaced its refrigeration equipment.