India, the world’s second-largest farmed shrimp producer and biggest shrimp exporter, with a harvest of more than 416,000 metric tons in 2016, is in trouble with the European Union (EU) for continued flouting of its rules (Council Directive 96/23/EC) regarding the presence of antibiotic residues in export shipments.

Tests undertaken by official EU control laboratories demonstrate that the level of compliance of aquaculture products from India intended for human consumption is unacceptable, particularly in regard to the presence of residues of chloramphenicol, tetracycline, oxytetracycline, chlortetracycline and metabolites of nitrofurans.

The EU has been in discussion with India over the past 10 years about contamination of shrimp and other seafood, but has finally run out of patience, and announced an audit of the country’s pre-export control procedures at the end of November. If the results are found to be unsatisfactory, a ban on imports is a very real possibility in the New Year.

Another option is for the EU to ramp up inspections to 100 percent of shipments, which would place a heavy financial burden on importers.

Within the EU, the UK and Netherlands both rely on India for more than one-third of their shrimp imports, France and Denmark for 12 percent and Spain and Italy for 5 percent.

Ben Wheeley, head of fish, seafood and global sourcing for M&J Seafood, part of the Brakes Group, is concerned by the impact a potential ban could have.

“It will make a difficult position worse. We are already seeing the effects now, with Indian suppliers reluctant to export to the EU due to the additional cost of pre-export testing, and the risk of rejections at port of entry into the EU,” he said. “Importers who have traditionally bought from India are moving to other origins, such as Vietnam and Thailand, which is adding upward pressure on prices.”

In 2010, the EU mandated that India inspect 100 percent of all exports destined for the European Union in pre-export controls, and set the level of inspections at port of entry at 10 percent. Last year, unhappy that recommendations from a 2014 inspection had not been satisfactorily addressed by the Indian authorities, particularly regarding official controls on the use of veterinary medicines and monitoring of aquaculture farms, the EU increased the level of inspections to 50 percent. The move was also in response to a surge in the number of shipments testing positive for banned substances.

In the past 12 months, the EU has reported 13 rapid alert cases of Indian shrimp imports containing furazolidone, nitrofurazone and chloramphenicol or exceedingly high amounts of oxytetracycline, despite the 100 percent control rate in India. Interestingly, value-added shrimp, which undergo more handling and washing, seem to have lower antibiotic levels than whole shrimp, which indicates that the heads and shells may have greater concentrations of antibiotics than the tails.

Importers who have traditionally bought from India are moving to other origins, such as Vietnam and Thailand, which is adding upward pressure on prices.

Similarly, in May 2016, India recorded the highest number of shrimp export rejections by the U.S. Food and Drug Administration in 15 years, due to the presence of nitrofuran and chloramphenicol.

In response to the EU ramping up the heat, India’s Marine Products Export Development Authority (MPEDA) has reinforced its message to the country’s shrimp producers to stop using illegal antibiotics, and asked the industry to begin internal testing of products for residues. The number of inspections of processing facilities, laboratories, farms and feed mills has also been increased, but the task is proving difficult. There are, for example, more than 50,000 shrimp farms to control and inspect, many of them operating on a subsistence scale.

As reported in The Hindu, Minister for Health, Drugs and Family Welfare Kamineni Srinivas assembled a special task force to regulate use of antibiotics and other drugs in shrimp cultivation, comprising top officials of the Drug Control Administration, Health, Medicine and Family Welfare Department, MPEDA, and the Fisheries Department.

The minister believes that unauthorised laboratories and points of sale have been misguiding farmers to use the wrong antibiotics and at the wrong doses. There is also a problem of shrimp accumulating antibiotic residues from the water used for cultivation.

Shrimp farmers use antibiotics to boost shrimp health and survival and, in unsupervised conditions, they are an easy and cheap substitute for investment in better hygiene and sanitation.

The two most widely used antibiotics in shrimp culture are chloramphenicol and nitrofuran, and it is these that are most widely identified in shipments.

According to a 2016 policy brief on antibiotic use and waste management in aquaculture, prepared by the Centre for Science and Environment (CSE) in New Delhi, India, handbooks circulated by fisheries officers during training recommend the use of furazolidone, terramycin and chloramphenicol for disease prevention and treatment. Their use as growth promoters is also suggested, especially during winter when growth is slower. However, furazolidone and chloramphenicol are prohibited for use in brackish-water culture.

In India, bamboozling is unfortunately an accepted practice, and that will be very difficult to change.

Local feed companies promote antibiotic-laden feed premixes to improve growth and body weight in fish, and farmers may be tempted to use these as shrimp feed if the price is right.

Recent spot inspections in Bangladesh and India have documented use of veterinary grade antibiotics intended for poultry or livestock, but not specifically for fish. Dosages differed from farm to farm and were based on word of mouth or guesswork, with no proper withdrawal periods before harvest, according to the CSE.

Use of antibiotics labelled for use in humans was also found, with farmers believing that if it works for humans, it will work for fish and shrimp.

Ivan Bartolo, regulatory affairs advisor at Seafish, the UK seafood authority, started monitoring the situation in July this year, when rumours reached him from importers anxious about the future of Indian shrimp supply. Checking the situation with Ghislain Maréchal, who is responsible for relationships with India at DG Santé – the Directorate-General for Health and Food Safety in Brussels – Bartolo realized that there was good reason for concern.

He organised a meeting for UK importers with Sarvesh Rai, adviser to the Indian mission to the EU, at which the importers expressed their concern. In addition, the British Frozen Food Federation reinforced their own fears in a letter to the Minister of Commerce and Industry in India.

“We were all assured that the Indian authorities believe the continuation of supply is of the utmost importance, and are working hard to tighten control at their end,” said Bartolo. “However, the effects on the market of a ban on shrimp imports would be significant in terms of both supply and price, particularly in the UK.”

Patrick J. Wood, a veteran of the shrimp industry, believes that the current issues will result in a strengthening of the standards for independent certification schemes such as the Global Aquaculture Alliance’s Best Aquaculture Practices, although he fears the majority of small-scale farmers will not have the means to meet stricter demands.

Blockchain is a tool for maintaining transparent and distributed ledgers that can verify transactions, including financial ones, with minimal third-party involvement. It has become synonymous with Bitcoin, but its potential extends well beyond cryptocurrencies. Blockchain’s main advantage is that it solves the problem of trust by making every transaction transparent and public. The Economist describes it as “the great chain of being sure about things.”

“Regulations and traceability back to the farm would help. Then, the processor could go back after the fact and pressure farmers to stop using antibiotics, or stop doing business with them,” said Wood. “A blacklist would also be a good idea, especially if it went all the way back to the feed manufacturers, with the MPEDA on board to revoke the licenses of those caught for non-compliance.

“A concerted effort is needed to correct the antibiotic problem in shrimp farming. Otherwise, all of us will have to face bad reputations and loss of market share,” he added. “In India, bamboozling is unfortunately an accepted practice, and that will be very difficult to change.” 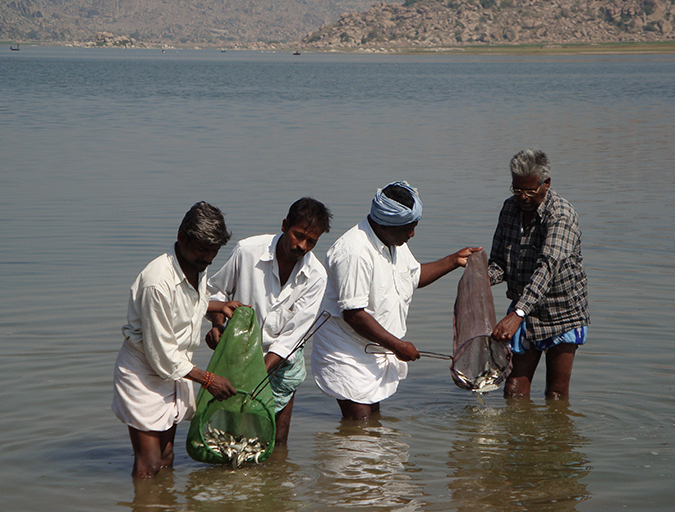